some time ago I have made two or three posts with stamps from Kenya ,Uganda and Tanganyika.. I have yet some George VI stamps to present , but this time I rather make a post with Kenya stamps that came in the same lot of the others from Commonwealth...
I have some complete series and some stamps from 3 definitive series from the 70's , 80's and 90's.. first I will start by presenting a map and some data about the location of 'Tanganyika'.. 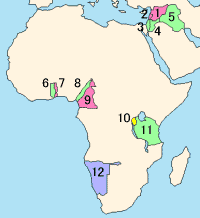 Tanganyika appears in the map of our left side with the number 11.. at our right side we see the current Africa Map, and the correspondence of 11 is now in great part Tanzania... this is an interesting fact because some of the stamps I have to present are  from a time frame when Tanganyika doesn't exist anymore and the stamps are from Kenya,Uganda and Tanzania... We can see that Kenya and Uganda are neighbors and were part along with Tanganyika of the same Postal Administration...

Let us start again in chronological order, with some stamps of 1964

This is the 2nd series from Kenya , that became an Independent Republic in December 1963.. the series is not complete , the 2.50sh stamp is missing , and along with wildlife, exotic birds and a rooster (?? *) ,President Jomo Kenyatta, almost Omnipresent in Kenya's stamps, appears ... We will find the figure and Personality of The President many times in this small post...
Two lines above, I talked about the rooster presented in the first stamp.. well , to explain it's presence I had to bring now the Coat of Arms of Kenya and a small quote of the symbolic presence of the rooster... 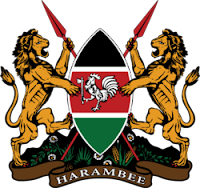 " According to the African tradition, the rooster is the only domestic fowl that announces the dawn of a new day (more like the alarm clock - the wake-up call).  At the rooster's crow, all awake and head for work at the early dawn. The rooster is also one of the few animals that seldom moves backwards. The rooster holding an axe while moving forward portrays authority, the will to work, success, and the break of a new dawn. It is also the symbol of Kenya Africa National Union (KANU) party that led the country to independence." (Wikipedia)

Here we have a stamp about an historic event.. the meeting in Ujiji between the Missionary David Livingstone and the American (??) journalist H.M. Stanley... this is one of those 'rich' stamps, full of history and new facts to know about...
Tanzania , Kenya, Uganda 1971"Centenary of Livingstone and Stanley meeting at Ujiji" (1) [Litho] Sc(237)

this series represents sequences of a Voyage of Elizabeth II to Kenya and is a commemoration of the 25 Years of Reign of the Queen.. I named this post after the Treehouse that appears in one of the stamps ,because I think it must be 'transcendent' to stay a night in one of these places surrounded by wild life...One more time the President appears , now near the end of his life..
Kenya 1977 "Queen Elizabeth II Reign Silver Jubilee" (4) [Litho] Sc(84,85,86,87)

Here it is one more series that highlight the role of President Kenyatta in the History of Kenya... some important facts of his life are remembered in this series, like the Declaration of Independence with the participation of Prince Philip and his arrest of in the years before the independence...
Kenya 1978 "President  Kenyatta Day" (5) [Litho] Sc(127,...,131) 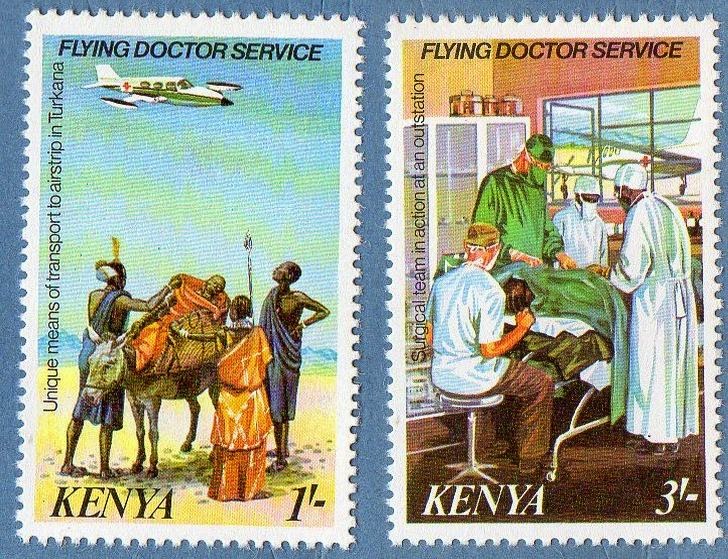 This is a series about  "The Flying Doctor"  Service... It is a Social tool that works also in other countries...in a post about Australia stamps I have talked about it and we came to the conclusion that it was imperative that a project like this was 'put into action'... people in distant places count on these men and women to save their lives when that is required...
Kenya 1980 "Flying Doctor Service" (4) [Litho] Sc(162,...,165)

Another beautiful thematic series..As I said before I don't have any kind of data regarding the Designers of these stamps, but I know that in 1993 Denis Murphy was pretty busy with the definitive series of South Africa (Endangered Animals).. I know also that he worked also for Kenya Postal Service and the final style of the stamps is similar.. white background, simple frame and beautiful design...! I don't know if Denis Murphy designed also birds (he was an expert in wild life design...) but I almost bet that this is part of his work....(I can lose , of course...)Kenya 1993 "Birds" (14) [Photo] Sc(594,597,598,600,601,604,605,606,608)

I only show you this stamp because I want to , again, express my insignificant opinion about actual stamps and the urgency of returning to the past...
We Europeans and Americans, no longer have the need to design our stamps.. no Artists needed .. just some photos and a good software and there it is.. A Stamp!!! I need to ask , is this appealing to the collector..?? is this good ?? Is it beautiful?? If I want to make a photo collection, I take the photos myself or I'll go to the Net and download hundreds of them ...The real fact is that it is cheaper, of course and today in a modern society it is all that counts...
I want to say that some African countries still design their stamps...(or great part of them..) and I would like to leave here a link to a site that have the difficult task of gather, promote and sell African Stamps...this stamp is a good example of the new kind of design available in some African Countries..it has some familiarity with modern (actual) Comics design..
Kenya 1996 "Work of Lions Club International in Kenya" (4) [Litho] Sc(698)