I think it is now time to return to the beautiful Madagascar stamps... with the work of some of the finest French Stamp Designers and Engravers , the result always rise high expectations...the stamps I have today are from the period where engraved stamps and [Recess] printings were still abundant in Madagascar , before the predominance of [Photo] and [Litho] stamps starting in the middle of the 70's...
I should remember You that to see some more of these beautiful stamps , You can access the labels 'drop-down Menu' at the top right and search for 'Madagascar stamps'....

The next two stamps are from a series that I have presented in one of the previous posts of Madagascar... they are from a 1960 large series with butterflies and designs related to the local industries...it is a magnificent series that count with the work of many Artists....

Both are High Air Mail values, and I'm glad to say that only the 500F stamp is missing from the original 6 Air stamps of this series...they represent some of the local industries responsible for most of the region's Income...
[Left] 1960 "Butterflies and Local Industries" (10+6AIR) [Des/Engr (Charles Mazelin)][Recess] Sc(C61)
[Right] 1960 "Butterflies and Local Industries" (10+6AIR) [Des/Engr (Robert Cami)][Recess] Sc(C62) 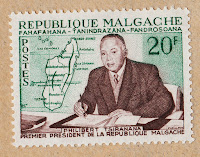 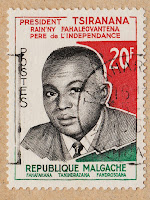 Another series with the President as main focus...it is one of those times when we can say for sure that Philately was used as a tool in the Political Game.. two series issued just days from each other , carrying the design of the President make us think that he was trying to get his image to his people...For us,collectors it is always better to not mix these two realities , but we all know that time brought us many examples of this behavior...
1960 "President Philibert Tsiranana" (1) [Des/Engr][Recess] Sc(320)

A Great series focused in one of the characteristic animals of the Island of Madagascar... by the designs we learn that there are many different 'Genera' of this species in the Island...once again we have the series divided in normal postage stamps and Air Mail stamps,3 of each (the 250F Air stamp is still missing)...the normal inland stamps were work of Jean Pheulpin... after a quick look to these stamps , I remembered other of his great works, this time for Laos in 1958... I'm talking of the "elephant Series" , and in both works he surely became one of the masters of the "Vegetable Background" Engraving... he always assure us a smooth ,soft and beautiful background whenever we are dealing with forests or other plant agglomerations...  the Air Mail stamps were designed and engraved by Pierre Gandon and as usual they match the quality we are expecting .. great works..!
1961 "Lemours" (3+3AIR) [Des/Engr (Jean Pheulpin 2F,4F,12F)(Pieere Gandon 65F,85F)][Recess] Sc(C67,C68)

There is nothing to say about this small series...it is curious to note that when we are talking of France or French colonies and when we stumbled across one of these single design series (more then one value with the same design...) we became a little "frustrated"... Yes there were so many Artists , that in most cases there was no space for this kind of series... it seems that they were always competing , and their Battle ground was the ... Empire..!! whenever there was French influence, there they were, designing and engraving frenetically , and in the end we were the solo heirs of their work... Oh, Lucky People We are..!
1962 "Admition to the UN" (2) [Des (Ravaka -Rakotondralambo)][Engr (Jacques Combet)][Recess] Sc(325,326)

the Religious Freedom and diversity is the focus of this series with designs of Religious monuments of the Island...
1967 "Religious Buildings" (3) [Des(Jacques Derrey)][Engr (Jacques Derrey 3F,5F)(Claude Haley 10F)][Recess] Sc(396,397,398)

well, it was one more post with nice stamps, and I would be very happy if I could bring someone more to the French Stamp Artists Fan Club... no fees and registry are necessary... just a scanner and a fair dose of good Taste...