Today I will return to the Belgium stamps.. I have still plenty to enter the collection  and I like them very much..

I will start with some stamps from King Leopold I .. Until now I have only presented King Leopold II stamps , because the reigning period (with postage stamps, of course..) was much greater than in the case of his predecessor..1849 to 1865 (King Leopold I) and 1867 to 1905 (King Leopold II)...
Let us start with the last series of King Leopold I , from 1865 .. One important fact that should be highlighted is that the stamps were printed in two different kind's of paper .. Thin (1865) and Thick (1866)  papers...in each case the same values are repeated (10c,20c,30c,40c,1Fr).. each one of this values have a different frame and Vignette design's ... ( it is curious to see the similarity between these frame designs and the one's from the Romanian 1872 Paris and Bucharest Prints.. there are differences , of course , but the overall simplicity of the design is there...)..another important aspect for the distinction of the two different issues of these stamps is the perforation .. in the Thin paper we have Perf 14.5x14 and in the thick paper we've got Perf 15...

The second stamp is only presented as a curiosity , because in the end it is equal to the first.. Yes originally it was a blue 20c Thick paper.. what happened to it ?? I don't know but i can speculate .. perhaps a prolonged exposure to sun light (but in this case , shouldn't the Postmark be also somehow vanished..?? Perhaps it was marked after the stamp was already in this condition..??).. I have two more old stamps of other origins and countries , with the same problem..both were cataloged as being Ultramarine blue , but this one was simply blue.. I think this is not important , but...)
All the 4 stamps presented are from Thick paper.. the last stamp, judging only by the sensibility of my fingers should be  a thin paper stamp, but the perforation clearly state  otherwise..I'm not in the ' point ' yet, I have much to learn with this 'sensibility thing' ..
the last two stamps , are in fact two shades of Grey 10c Thick paper..
1865/1866 "King Leopold I" (10) [Engr (De La Rue)][Typo (Brussels)] Sc(19,19,18,18)

These beautiful stamps are Train Parcel stamps ... for those who don't know , the study of these stamps is highly developed by Belgium and foreign Philatelists..stamps for this purpose begin to be issued in 1879 and I think that in the 1980's they were still issued...
The initial thing to be known is that the Belgium railway was commissioned to transport Post parcels.. these parcels could be delivered in a train station, a postal office or a Telegraph office..  for each of these cases , one proper cancellation was used.. in the train station, these large cancellations were used together with hexagonal Marks.. in the Telegraph station Octagonal marks were used...
As we can see , all of these stamps were cancelled in train stations, being the lemon 80c stamp (Beautiful, beautiful...!!) marked with an hexagonal mark..
So, a person carries the parcel until the train station , where a small piece of bureaucracy was attached to the parcel with some of these stamps and corresponding cancellations...
As i said before , the first series of these stamps was issued in 1879 , the 2nd in 1882 , the 3rd in 1895 and these stamp are from the 4th series , of 1902/1914.. the 3rd and 4th series share exactly the same designs.. however , there is a distinctive difference between the two series.. in the 3rd , the Designer's name appears below the inferior frame..in the 4th this is omitted..
there are some strange errors in the date of some of these cancellations..(on is from 17.. and other is from 2014(?)..) .. after a quick look at the stamps we see that the Fr values have a different design , with a winged train wheel in the center..
1902/1914 "Parcel Train Stamps" (20) [Des (Poortman)][Engr (Poortman)][Typo (Malines)] Sc(Q29,Q30,Q33,Q34,Q36,Q38,Q39,Q40,Q41,Q42,Q43,Q44,Q45)
I don't know if the designer is Maurice Poortman (it is possible , because he retired in 1943 , so he should have 20 or so Years when he designed these stamps.. I have to ask somebody for this info...)

these are stamps from 1915 and represent important buildings and constructions in Brussels and other cities and important dates in Belgium History.. The 2nd stamp is showed here just as a comparison with the 3rd (it is already in the collection and appeared in an earlier post about Belgium stamps..), because I think that are visible the differences in the designing or coloring of the vignette.. in the 2nd stamp the sky and the clouds appear more highlighted and the building with a more light black or black grey .. in the 3rd stamp the sky and clouds are faded and the building in a bright black.. i think this is notorious ( together with the beautiful Crown Perfin of the 2nd..)..
the 5th (65c)  was put together with these stamps but it was issued five years later , in 1920..
1915/1919  "Various Designs" (7) [Recess (Waterlow and Sons Limited, London)] Sc(116,118,118,117,139,119)
the Recess Printing was latter made in Haarlem..

here we have a nice pair of a stamp from 1919 with two parallel perfins (.N.C.N.) .. there were two printings of this stamp, differing in the sheet composition(10 stamps in the first , 100 in the 2nd..) and in the dimension of the stamp, with a very small difference.. I cannot detect these small differences in dimension, with the simple tools I use.. the stamps from the first printing are much more scarce..
1919 "Le Perron De Liege" (1) [Recess (Enschedé & Sons, Haarlem)] Sc(123)

These are stamps of one of the several King Albert I Definitive series...At first , I had some problems finding the correct match of colors with the colors in the Catalogs.. Finally , I saw that the color in the catalog is the color in the small square of the Value numeral...for instance, the third stamp appear in the catalogs as Bright Blue , but the stamp itself is a grayish blue or Dull grey blue or something like that.. only that small square presents the bright Blue that we are after...The name of the Designer and engraver George Montenez , appears below the inferior Frame..
1921/1925 "King Albert I" (8) [Des (George Montenez)][Engr (George Montenez)][Recess (Enschedé & Sons, Haarlem)] Sc(162,...,167)

This is a complete series that present's us paintings of Kings  Leopold I and II and of King Albert I.. I must tell that for me this stamps are a small disillusion..before I have them , I saw some detailed pictures of one of the stamps , highlighting  the qualities of the engraver... I was not expecting that in reality the stamps were printed in a very thin paper that doesn't match the quality of the engraver work.. it deserved a thicker and better paper...
1930 "Centenary of the Independence" (3) [Engr (Jean Debast)][Recess] Sc(218,...,220) 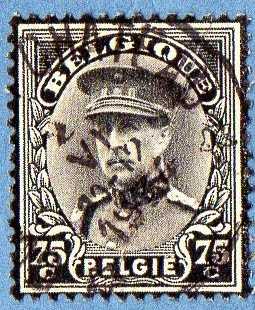 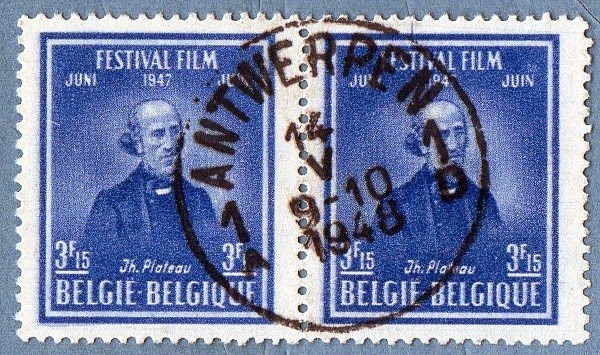 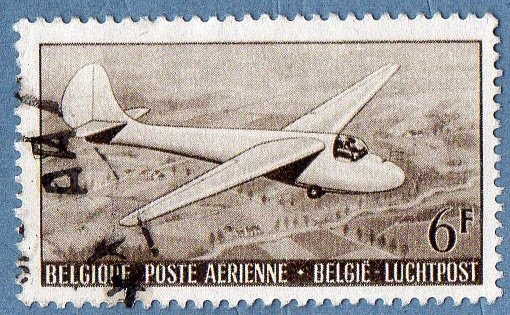 We have reached the point in time where there is not much to talk about the different series that show up at our front.. Maybe that's one of the main reason for my preference for stamps from 1900 to 1930.. but it is natural that Commemorative stamps begin to appear more often than they do in earlier days...
first we have a pair of a series from 1947..
1947 "International  Film and Belgian Fine Arts Festival" (1) [Photo] Sc(373)
1951 "AIR MAIL" (2) [Photo (Malvaux, Brussels)] Sc(C13)

Perhaps someday in this Year of 2015 i will make another post with Belgium stamps, now with emphasis in the Parcel Train stamps.. I've got many and diverse...
For now , it's all, until next time