I have this small lot of Mexican stamps 'for a long time', and the reason why the classification isn't already done is simple.. after a first 'in loco' view , I thought that the stamps were in very bad conditions and the will to classify them seems to be lacking... two days ago, I remembered them and I went to see the catalogs for some info... then I saw that some of the pictures in the Catalogs were also of bad condition stamps.. so I thought.. "Let's do it!!".. anyway , there must exist some new or nearly perfect stamps, so I am asking you to keep in mind that these are "Bad condition" stamps....

The classical period and the emissions  of the start of the XX century , until the 20's are like in other countries forged in Battle, with new emissions and overprints always responding to the Up's and down's of the War and the civil war...it is a fantastic period with many catalog pages full of constantly renewed overprints...
It is necessary to understand the History involved in the creation of some of these stamps... so I will post some History Background taken from an old catalog.. and there We can see that even in those days , the world was already a small place..

The first Mexican series of stamps appears in 1856 and we have to know that the stamps were 'handstamped' with the name of one of the 56 districts of the country.. this is another fact that will evolve with time with the Overprint of the stamps , in 1868 (already in another period of history...) , with the number of the district and the last two digits of the Year... I have some stamps from this period but in very bad conditions , perhaps another time they will be presented...

From these period , I have no stamps to present...meanwhile , beginning in 1865 , the Revolutionary movement was already in action...

Here appears the first stamp I have to present .. and it is a stamp of the 1st Mexico President Benito Juarez..curiously it is in fine shape (except a small fault in the perforation..) and in General good condition.. 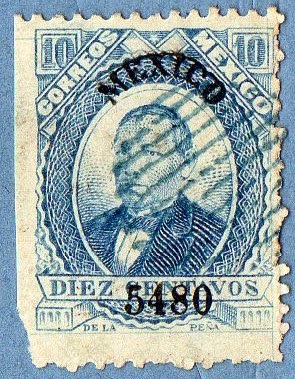 You can see the Overprints of District and by the number presented we know that the stamp was issued in 1880.. one more time I 'm not certain if this is a Ultramarine blue or just another blue,..the fact is the Ultramarine variety , issued in 1880 is more valuable that the current blue one..
We can see also that the left margin is imperforated , what makes this a very strange stamp..but beautiful!! and one thing for sure , there are many Beautiful designs and great Recess Printing's in some of these Mexican stamps..this series was printed in two different kinds of paper , one thick (1879/1880) and the other thin (1882) ... and as you know I'm not the best person judging paper qualities, but the difference in these stamps and in those about to come , is so great that even I can do this distinction clearly..(because the thick paper is really thick!!!..) the number of stamps issued is diverse for each case (8 for the thick and 15 for the thin paper)
1879/1882 "Benito Juarez" (23,1) [Des (De La Peña)][Recess (Government Printing Works, Mexico City)] Sc(126)

These are stamps from a series of 1895, that I call "Transporting the Mail".. the question about the Ultramarine blue I have made above , is now responded with this beautiful 5c Bright ultramarine blue stamp...
in the first 3 designs  a Postal office Employee walk with the mail at his back..

the 5c represents the Statue of Cuauhtémoc and in the other 2 , a mail carriage is represented (beautiful vignette and frame..)
This is a series known by the many possible perforations and combinations of different Perforations... I must confess that I didn't pay much attention to this detail (but I should, because the cv are very different , sometimes..) and I only give the stamps their general Scott code...
1895 "Transporting the Mail" (13,5,5) [Des (J.M. Donald)][Recess (GPW,Mexico City)] Sc(242,243,244,246,248,252)

two beautiful stamps , representing the Juanacatlán Falls and a view over the Popocatépetl mountain.. In the 1p stamp you can see the 'Handmade' Overprint  with 'Oficial'... this series contains 4 different designs , the first with a coat of Arms, 2md and 3rd are presented and the 4th , a 5P stamp showing the Mexico city Cathedral..
I have also some of the coat of Arms values but I don't choose them to present today and in the end they had a place in this post.. (I choose the stamps before knowing and studying the catalogs.. next time..!)
1899 "Coats of Arms and views of Mexico" (10,4) [Recess (Bradbury Wilkinson & Co.)] Sc(301,O57)

These are stamps from the "Centenary of the first movement of Independence" series of 1910..they represent the major figures connected to the Independence movement and it is the last series before

the start of the Civil War, and as a result it is one of the most Overprinted series of Mexican Philately, because as I said before many overprints tried to follow the needs and changes of an history that evolved at a

"On May 25 1911 , President Porfirio Diaz who had been a dictator since 1876, was forced by a Popular movement to resign, and the Liberal Francisco Madero succeeded him as President."

And the civil War started , with subsequent confusion all around the Mexican Post Office...
The  Sonora district start to issue their own stamps, there are overprints for all these movements , as you can see more ahead.. The so called Constitutional Government had 'handstamped' overprints and they are so many different one's , that SG , for example, has 8 pages only for this subject... I have some of these also, but I leave them for another time , again...

I put here , side by side , the Two Movements that were born in 1914 (of course , you can read the texts , clicking them...) , because I want to use just one stamp , the 5c Hidalgo 1910 stamp with some of the most common overprints and surcharges of these period (without counting those of the last period..)

We will find again in this series , the distinction of a varied group of papers due to it's thickness... it's relatively easy to separate the thick paper from the thin , but it is not easy to see the limits of the 'Medium paper' (where ends the Thick , and where ends the thin paper...).. the perforation here , could help in this distinction , because it is different for some of the paper varieties.. The personalities represented in this series are : 1) Ignacio Zaragoza 2) Ildefonso Vasquez  3) J.M. Pino Suarez 4) Jesus Carranza 10) F. I. Madero 20) Belizario Dominguez 30) Aquiles Serdan
The two varieties of the 1c stamp are presented and there could be or not some difference in the 20c stamp (between 'red brown' and 'rose lake'..) and the last stamp is the Black variety , and a 'grey brown'  one exists too. The 5c Ultramarine Blue stamp is missing..
1917 "Portraits" (10,8,8) [Des (F. Fernandez)][Recess (GPW, Mexico City)] Sc(608,609,610,611,612,614,615,615a,617)

The first two stamps new designs and values to a series already issued without Wmk.. this time some values are issued with Wmk and with the addition of these two stamps...
1923 "Monuments" (8,8) [Recess (GPW, Mexico City)] Sc(648,649)
The last stamp is a reissue with new values and colors of stamps of a series from 1915.. Sc(cannot find it now...) 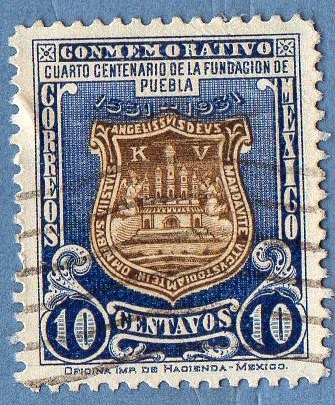 I hope that you all like this post and above all that Mexican Stamps could be one of your future Priorities..Really Good Classical and Semi-classical stamps...!