Hello, today I bring you some Madagascar stamps...As you know , these stamps present a great French influence , because Madagascar and some other Indian Ocean Territories were under French Influence , as colonies or simple Protectorates.. To talk about French influence in our hobby is to talk about quality... Great Designers and Engravers...however, great part of the stamps I present today are [Photo] Printing stamps and this was not usual in stamps under French Influence..As we will see, this one's were made under difficult conditions...
Stamps from this beautiful and Unique Island can appear with one of seven Country Labels..
1) " MADAGASCAR " (1884/1886) Stamps issued by the British Authority... The Power over the Island and neighboring territories was in dispute first between French and British authorities , but in 1886 the British swap their claims over the Island for the Acceptance by France of British dominion over Zanzibar...The Territory became a French Protectorate in 1885 , but only in 1896 it was officially declared a French Colony..
2) "MADAGASCAR ET DEPENDANCES" from the first issue of the Territory until 1930..
3) "MADAGASCAR" from 1930 to 1958
4) "REPUBLIQUE MALGACHE" in 1958 , Madagascar became an Independent State...
5) "REPUBLIKA MALAGASY" from 1961 to 1976
6) "REPUBLIKA DEMOKRATIKA MALAGASY" under Soviet Influence .. until 1993
7) "REPUBLIKAN'I MADAGASIKARA" until our days..

In this first post about Madagascar I have stamps from the 2nd and 3rd period's .... 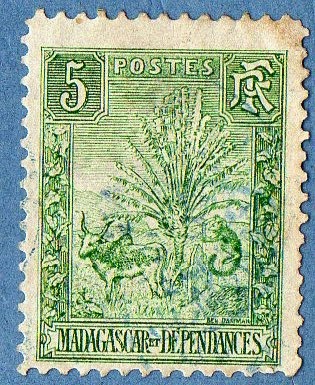 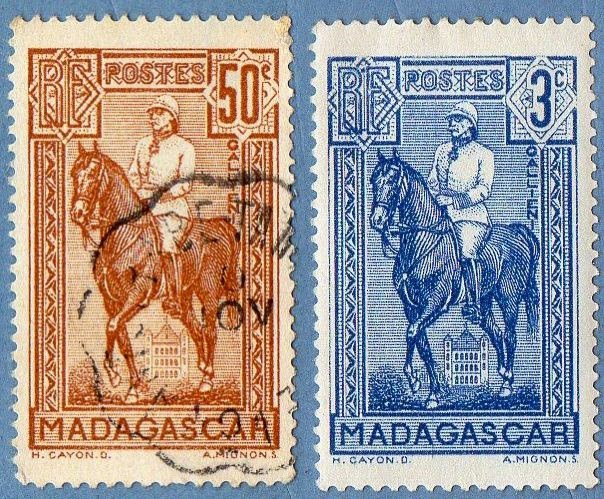 These two groups of stamps seem's to be similar, but they are from two different series, with the same design.. they differ in the size of the stamps... this difference is very notorious if we have the stamps in our hand, and we note it after a quick first look... I should say that we are talking of a difference of half of a millimeter in size... the two series we are talking about differ also in the perforation (14.5 1st 13.5 2nd).. the stamps represent General Simon Gallieni
1st Group] 1931 "General Simon Gallieni (1st Series)" (5) [Des (Madame Cayon-Rouan)][Engr (Abel Mignon)][Recess] Sc(173,174)
2nd Group] 1936 ""General Simon Gallieni (2nd Series)" (11) [Des (Madame Cayon-Rouan)][Engr (Abel Mignon)][Recess] Sc(182,180)

[ the designs attributed above to Madame Cayon-Rouan are in fact work of Henry Cayon ... Sorry for this enormous mistake... Updated 04/11/2015 ] 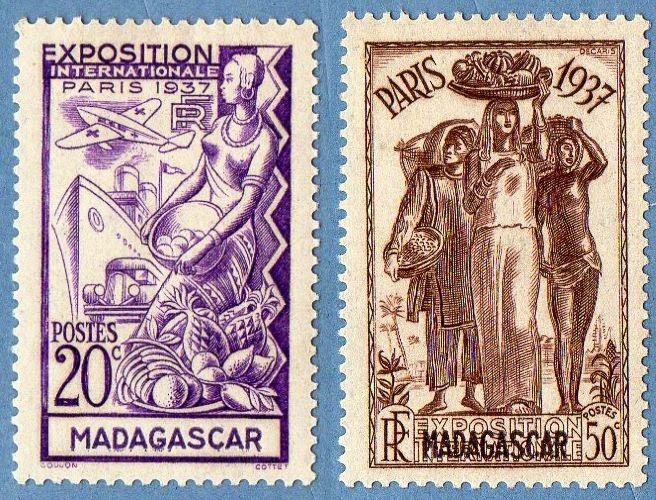 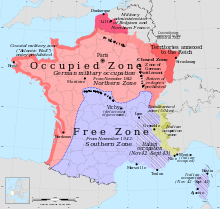 To start this next section of our post, we need to introduce an historical view over France and it's government near the beginning of WWII... initially, after the German invasion of France, the country was divided in two parts, the North and the South.. the north was occupied , obviously due to it's strategical interest in Hitler's Campaign against the UK, but the South remain a Free and unoccupied zone until 1942 , when it was finally occupied by Germany...From 1940 to 1942 a French government , ruled by Marshal Petain was centered in Vichy, and it was called the Vichy Government.. ..The next series of stamps were issued by the authority of the Vichy Government , but never were actually sold in Madagascar...so, we are now facing only unused stamps, never really circulated in the colony.. 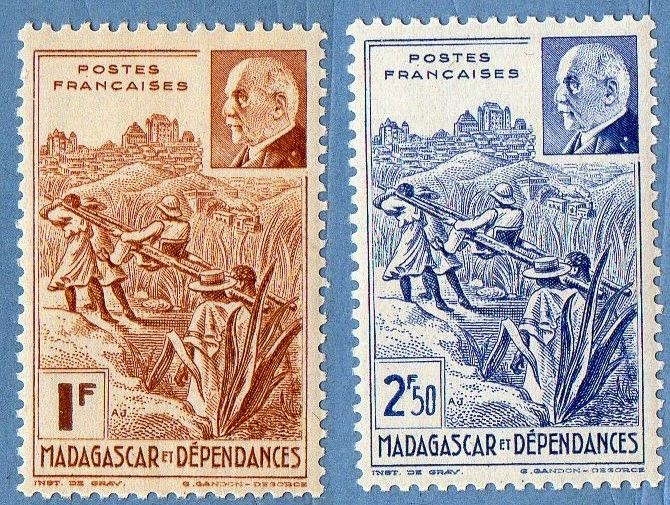 This first series presents us the same design used in the 1908 series (Traditional Transport..) , but with the portrait of Marshal Petain... The stamp is designed by an unknown Artist , whose initials are AJ and are writen next to the currency label..The stamps are engraved by Pierre Gandon and Degorge...The figure and work of the Lettering engraver was never common among French engravers, so I think that one of the Engravers worked on the Design itself and other just on the Portrait.. I cannot find another explanation for the presence of a signature in the Design and two French engravers..
1941 "Marshal Petain and Traditional Transport" (2) [Des (AJ(??))][Engr (Pierre Gandon)(Degorce)][Recess (Institute De Gravure, Paris)] Sc(210A,210B)

[ today I read an article in the Blog "StampEngravers" ,that opened my eyes to an important mistake I made,regarding these stamps... One of the Engravers is Gaston Gandon and not his son Pierre...Pierre Gandon engraved his first stamp in 1941  and it was not for Madagascar, so where You read "Pierre Gandon" You must read "Gaston Gandon"..] Updated 24/01/2016 13:22 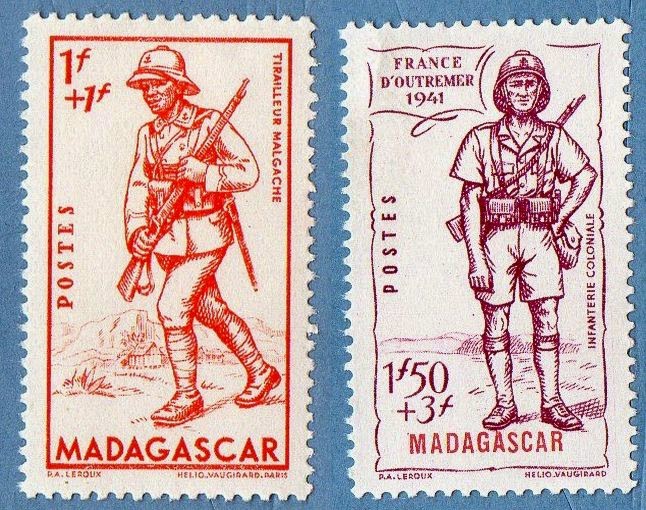 I don't know what was the real purpose of these stamps, so I say that they were meant to be aid for some Military Fund ...I don't understand how the Occupation Force let this stamps be printed in Helio Vaugirad ,Paris if they were to help the War effort.. I have to read a lot more about these stamps that don't really circulated in the colony...
this is a [Photo] Printing Series and unlike the previous series,  these are not elaborated designs ...
1942 "Military Fund" (3) [Des (P. Alleroux)][Photo (Helio Vaugirard, Paris)] Sc(B8,B9,B10) 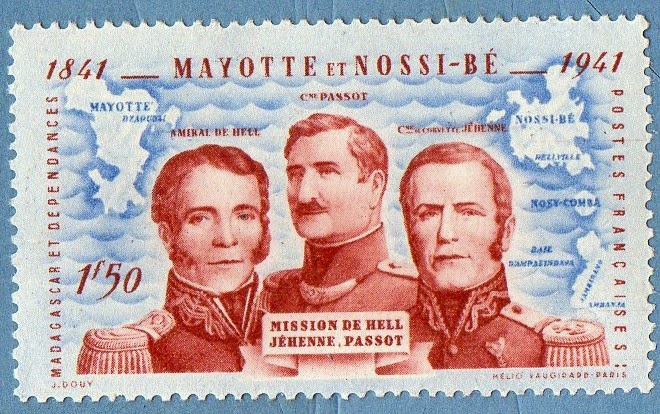 This is a stamp representing three French Explorers and a Map of  some Indian Ocean French Territories administered by the Madagascar colony...
The Explorers are ,from left to right  : Admiral Anne Chrétien Louis de Hell, Captain Passot, and Captain Jehenne..
1942 "Centenary of the French Colonies of Mayotte and Nossi Bé" (1) [Des (J. Douy)][Photo (Helio Vaugirard, Paris)] Sc(211A) 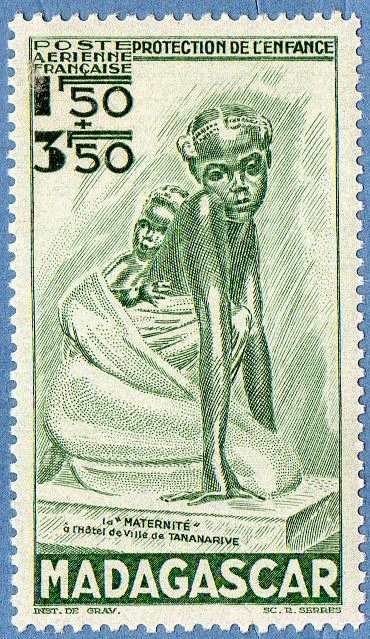 To end this post , some stamps from a famous series from this period...

I will have two more posts with Madagascar stamps in a near future...