This will be a post different from the last ones, with  stamps of 4 countries...today I will not present many technical data about the stamps, some because I don't have it  but other because I am currently with a little time problem...
let's begin with a series we all know...

Continuing the effort to have all the Commemorative's from the beginning until 1945, I bought this 1937 famous series..it is a beautiful series representing famous Generals of the Army and Navy, several famous boats and the US Army Academy at West Point..I will not present here the designers and engraver's data , as stated above..
USA 1937 "Army and Navy Heroes Series" (10) [Recess] Sc(785,...,794)

now for something Completely different , some stamps I bought recently...

I was wandering through the Net , when I saw this little group of Japanese Telegraph stamps.. I had for a long time a 15s stamp like the one presented here, but in lousy conditions... When I saw it, I immediately want to buy it.. so ,I bought them ,even with a repetition and an invalid imperforated stamp in the group... it was just to have that stamp... they are beautiful stamps with the usual beautiful cancel, and strangely ,after a quick look , I didn't find the codes in Scott catalog..

in the same day , when I was visiting the seller's online shop,I found 3 more stamps of the "Men of culture Series"..as we know it is not a frequent series to see complete, and it is expensive , even when we are talking about used stamps..so I always buy those stamps I find occasionally...they are beautifully engraved and certainly good additions to any collection..
Japan 1949/1952 "Men of culture Series" (18) [Des (M. Kimura)][Engr (F. Watabe)][Recess] Sc(480,482,483)

some Classic stamps from Iran with a new "Lion and Sword" design , very usual in these early issues...I think these are the first classical stamps from Iran , that I show here in the blog..I must , when I have the money, invest a little more in these stamps because they are really beautiful.. the lion and the sword are together with a shining Sun in the Center, topped by a beautiful Crown and Arabic Labels...There are two series that share this same design, one from 1894 (1st group) and other from 1898 (2nd group)...same values have different colors in each of these two series , and this is an aspect that facilitates the classification...
1st Group) Iran 1894 "Lion and Sword" (11) [Typo] Sc(90,91,92)
2nd Group) Iran 1898 " (16) [Typo] Sc(105,108,110,111) 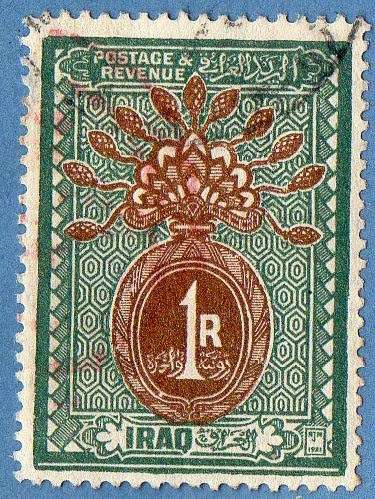 These are stamps from the first commemorative Series from Iraq.. it is a very beautiful series with designs of Iraq Culture, monuments and Landscapes...
As you know , I have another blog about stamp Designers..during the research for Biographical data from the Designers of this series , Miss Edith Cheesman and Mrs. C.C. Garbett, I found several aspects I think I should focus here...we are talking about a series from 1923 , and the first aspect that troubled me is why and how two British Women Designers could exist at the same time in Iraq and what was the relation between them..first I found some data about Miss Edith Chessman through the life of her brother Major Robert Cheesman..I found out that she traveled with her brother to Iraq and other places in the Middle East..He was already a famous Ornithologist, and made significant discoveries in the Arabian Peninsula.. about Mrs. C.C. Garbett I found nothing , except the fact that she was married to Mr. C. C. Garbett..this was the Central point to discover the relation between these two women..Both ,Mr. C.C. Garbet and Major Cheesman, were chosen by Sir Percy Cox, to help him in the establishment of the British Secretariat in Iraq..so there they were , with our two Designers in 1923, Iraq..
another aspect I like to emphasize is the fact that at the same time , another British woman was playing an important role in Iraq's History.. i'm talking about Gertrude Bell ... after reading her letters , I realized she was indeed a women ahead of her time , perhaps one of the most Powerful women of her days...
And now a challenge to Hollywood Producers...How about a movie about the life of Gertrude Bell.!??!.

This post was a little shorter , but as I said before I was with a 'time' problem during the preparation of the post..