Several of my last posts were about large or even huge Series of definitive stamps..there is always something to tell about those stamps, that in a first view are all equal , with identical printings, same designer and engraver, etc.. but in the end there are,  since the beginning of our hobby ,people who devote their time to these series, searching and digging , always waiting for a new detail or a new and fresh perspective ...We must be very grateful to all of these people , anonymous in their major part , for the advancements in the hobby and in the construction of the history of Postage stamps and development of printing and other 'lateral' techniques ... Now , computers will not let all this knowledge be forgotten, and in some years time , with just a click we will know everything we want about the various disciplines of our hobby... there is still many to be done!!! many old stamp magazines and literature to be digitized ,  the work of many important people who remain still unknown , etc... All this work should already be done  , and done by the Major Post office's who have all the data involved... but no, the collector must do it , and sometimes in the hard way..
To collect stamps is to have some moments for your own , thinking just in stamps and working with them , whatever that could mean..When a collector is working with it's stamps, it is in peace, relaxed, letting all the other influences for moments , in the other side of the door.. there are no money problems, no wars, no... just for moments , of course..! I think that it is because of this relaxing and individual time that all of us start to collect.. it is quality time!!!

The other day i presented some Chinese Commemorative's , and now i have some beautiful stamps, also commemorative's from France 20 's, 30's and 40's.. Let's start.. 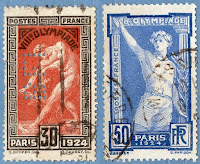 Well, here is another finished series.. this one is from 1924 and it is about the Olympic Games.. the first stamp was already presented in the blog , and there are two of the  25c because the Background red is definitely different...( so , there are color variations..).. I want to apologize , because today some of the stamps have problems with the perforations (one day i will replace them..)
1924 "VIII Olympique Games" (4) [Des (E. Becker)][Engr (G. Daussy)][Typo] Sc(199,199 200,201) 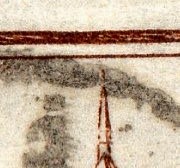 This is a stamp commemorating the St. Michel Mountain, one of the most know places in France ..  there are two types: type I [Left] , more valuable, with some details of the uppermost part of the tower, somehow faded, with divisions in the brown lines limiting the tower... the single line that tops the tower is also divided ( it is difficult to see in this image , because of the Postmark...) Type II [Right] presents us very well defined brown lines , limiting the tower and the top line is not divided, and this is clearly seen in the image... from the appreciation of those three stamps above We can conclude that stamps with greater presence of the background white in the design of the mountain, are those of type I, that is to say , those stamps with a lighter brown in the mountain... stamps with a dark brown mountain should be type II...

One more stamp of the fabulous French series "Sites Et Monuments".. it is a series spread through a large time frame (I don't know if it continues or not in our days...) with magnificent designs and beautiful engravings , as usual in French stamps.. this time a monument is the focus of the stamp...
1935 "Sites Et monuments / Saint Trophime D'Arles" (1) [Des (Albert Decaris)][Engr (Albert Decaris)][Intaglio]  Sc(302)

This stamp commemorates the life and achievements of Andre-Marie Ampere, known to us in the field of electricity...
1936 "Death Centenary of André-Marie Ampere" (1) [Des/Engr (Antonin Delzers)][Intaglio] Sc(306

This is a beautiful Ultramarine blue stamp, representing the windmill that was immortalized in the book of Alphonse Daudet , published in 1866, "Letters from my Windmill" ... this is another of those stamps with possible 'bonus'.. Yvert 2013 tell us that if the sky background is white , the value of the stamp increases considerably.. the problem is 'what we should consider as white' (?) if we see the pictures below the stamps , we will find small lines that could be more or less colored... in the first stamp, with a 400ppp scan we can only see some darker shades at the right side of the sky...the lines to the middle and left are almost invisible to us...in a 720 scan, we can see that in those places , there are still many small lines but very faded.. of course none of these stamps , could be listed as one of those with white Sky, but I show them for You  to see all the work necessary to imagine and build something that in the end has almost no value at all...it is necessary to the designer to know what are the capacities and limitations of the engraver, always thinking in a good product when it will arrive at the printing... this is one of the reasons why some of the best stamps are production of just one men , designer and at the same time engraver or as a  result of joint efforts of the same two men (designer and engraver..)  during many works and many time... To 'give life' to a Good stamp was ,without doubts, complex...
1936 "Daudet's windmill" (1) [Des/Engr (Jules Piel)][Intaglio] Sc(307)

This is a very nice design from Antonin  Delzers.. it celebrates Peace, everyone is enjoying the moment , laughing and crying of happiness...  but Peace is like the Rain, we only truly enjoy it , after a long drought...
1936 "Peace" (1) [Des/Engr  (Antonin Delzers)][Intaglio] Sc(321) 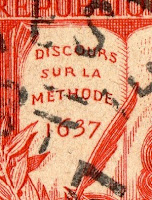 Very beautiful stamp, with a girl dressed with the local costumes of the Champagne region...This stamp commemorates the life of one of the main innovators in the production of  Champagne.. I'm talking , of course of the Famous Dom Pierre Perignon
1938 "Tercentenary of the Birth of Dom Pierre Perignon" (1) [Des (André-Spitz)][Engr (Antonin Delzers)][Intaglio] Sc(350)

stamp representing the D-Day , marking the beginning of the Decline of Hitler's dream.
1954 "10th anniversary of the Liberation" (1) [Des/Engr (Raoul Serres)][Intaglio] Sc(718) 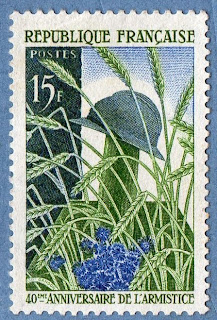 With this magnificent work of Pierre Gandon , I will end this long post, hopping that it contributes to a renewed will to collect stamps, 'Where Ever You Are and No Matter What Stamps'....