Today I have some stamps from Cape Verde Islands and Mexico...

I lived for seven years in the Cape Verde Island of Sal..My parents both worked there and I have some good memories of the Island and above all , of the good people  that always welcomed us.. so, it is not strange that I recently bought a small lot of Classic Cape Verde stamps.. there are more stamps in this lot , but I will not show them today... Many more are already in the collection, and so they cannot be shown here in the blog.. If you find it , please buy the beautiful 1948 "Cape Verde Landscapes" series...

This is a small mix of different series ... first I wish to say that the classification of these classical Cape Verde stamps is relatively easy , if we compare it with the same designs , but issued in Portugal, where there are many different papers to consider ... with these stamps you must pay attention mainly to the perforation...
1) this is a stamp of the "Crown type" series.. there are two series with this design , and the 2nd present us new values and colors, so there isn't much confusion... each of the series have two possible perforations (12.5 and 13.5) and the stamps are printed in flat, thin or medium paper...
1877 "Crown type" (9) [Des/Engr (Augusto Fernando Gerard)][Typo (Casa da Moeda, Lisbon)] Sc(3)
2) 3) These are stamps representing King D. Luis I...the stamps are [Typo] printed and present us the characteristic 'embossed portrait' of the early series of Portuguese stamps...the series has also two possible perforations (again 12.5 and 13.5) and porcelain paper, medium or tick is used ...
1886 "King D. Luis I" (9) [Des/Engr (Frederico Augusto de Campos)][Typo / Embossed (Casa da Moeda, Lisbon)] Sc(19,21)
4) 1893 "Newspaper stamp" (1) [Des/Engr (Eudócio Cesar Azedo Gneco)][Typo (Casa da Moeda, Lisbon)] Sc(P1)


MEXICO
-------------------
I have already done 2 or 3 posts with Mexico stamps.. the stamps were mainly from the classic period, highly recommendable because of the many interesting features present.. overprints, surcharges, papers, etc.. now i have same stamps the 30's and others from the 70's,80's and 90's.. Let us start by talking about the great Mexican Air Mail series from the 30's.. very beautiful designs sometimes linked to the great past of Mexico (with it's AZTECS  heritage..).. the most part of these series are [Recess] printed, what make's me very happy.. unfortunately I don't know yet the names of the designers, but i think that with time everything will 'come out to the light'...! 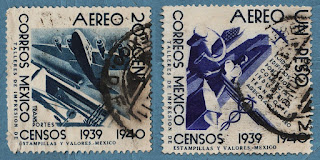 These are stamps from a Gigantic series about the Exportation's of Mexico... the series has 90 stamps divided by 6 sub series with stamps issued from 1975 to 1992... It has a very modern design developed in the end of the 60's and during the 70's ;  the designer of this great series is Rafael Davidson... some of the stamps share the same designs ...there are many ways to distinguish the stamps, but we can say that classifying this series is a hard task... Wmk's, perforations , the presence of distinctive lines in some stamps ( the existence of these lines creates two distinct types of stamps) , sometimes different papers are used, etc... it is not my favorite kind of design , but  It is without doubts , a series that I would like to have complete...
1975/1992 "Mexico Exporta" (90) [Des (Rafael Davidson)(Photo)