Well, I'm starting this post a little early than I was expecting (here and now is Monday, 18:53).. it is the second time I decided to do the post by sections.. I have only classified 3 stamps,but they are clearly from a well defined early period of the New Zealand Philately,so I'm starting now to do the 'talk' part before I enter into other more advanced periods of time... 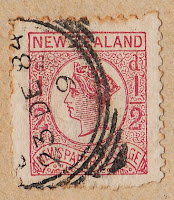 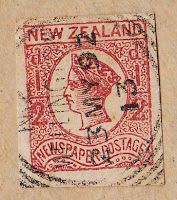 These are Newspaper stamps... stamps with this design were issued from 1873 to 1892.. the several issues differ in the presence or not of wmk, in the wmk itself and in the perforation...  I have only one problem with these two stamps :
[Left] this stamp has a Star watermark and the perforation nearly 12.. these two characteristics put this stamp in the 1875 issue..
1875 "Queen Victoria" [Des (John Davies)][Typo] Sc(P3b)
[Right] and here is the problem.. this stamp doesn't exist!! it has no wmk, so it only could be from the 1873 issue or from the 1892 issue... but in all the stamps issued from 1873 to 1892, there are no Non Perforated stamps...! some Horizontally non perforated or Vertically non perforated stamps exist in vertical or horizontal pairs but in the 1875 issue, with Wmk.. the stamp appears to be from the 1892 issue , because it has a bright rose color, characteristic of that issue , but I cannot explain the non perforated margins.. 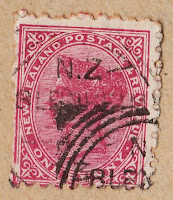 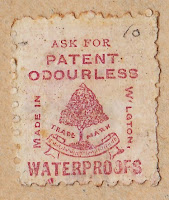 These are two pictures of the same stamp.. Yes, the right picture represents the back of the stamp... I have heard of these stamps with advertisements in the back but I didn't have one until now.. the stamp itself represents another Queen Victoria portrait  and belongs to a series with several different designs (different portraits and frames).. to classify correctly these stamps with advertisement , we have to know the perforation and then look at the advertisement in the back to see it's color and finally choose what is the correct type of the stamp..(there are 3 types : this one is type 3) ) in this case , we have a perf 10 , mauve publicity and type 3 .. there are many, many possible options so it is desirable that we have one of those colorful things that allow us to do know the right colors present in the stamps... I have to say that all these combinations between the stamp, type and advertisement are only present in the SG Commonwealth catalog.. the others I have , mention only the existence of publicity in the back of the stamps, but nothing more.. but, of course they are more generalist catalogs, not specialized versions...
1993 "Queen Victoria" [Typo] Sc(61) SG(218j) 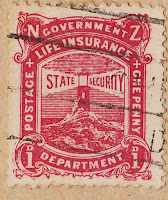 This is a Insurance Department stamp...there are 5 main issues of this design , from 1891 to 1947... they differ in the perforation and/or Wmk... I cannot see the wmk in this stamp , but a closer look to the catalog narrow the possibilities, because until the 1913 issue (3rd) the 1d stamps were blue colored.. so we have no problems with the Wmk (it is the same in all the remain issues..) but we have yet different perforations.. this stamp has 14x15 , so the problem now is to find the right color.. this is definitely a Carmine Pink stamp... we have finally 2 options and they differ in yet another detail... the paper (the 1913/1937 issue was printed in 3 different papers, all chalk surfaced , but with other different properties.. this is for me very hard to decide, because I'm still not very experienced with papers...so I will give one Sc code and two SG possible codes...)
1913 "Insurance stamp" [Des (W.B. Hudson)(J.F. Rogers)][Typo] Sc(Cy13) SG(L25a)(L31b [1925]) 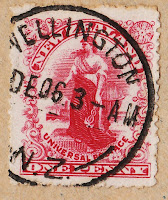 now I have some examples of one of the most famous New Zealand stamps.. it is known as the 'Universal Penny Postage'...the designs seem to be identical , but after a closer look we soon identify several differences...[Left] this is a [Recess] printed stamp (from 1901 to 1906 we have [Recess] printed stamps, and from 1908 to 1926 there were several issues of [Typo] printed stamps...) this stamp present no Watermark ...
1902 "Universal Penny Postage" [Des (G. Bach)(G. Drummond)][Recess] Sc(105)


[Right] the [Typo] stamps from 1908 are redrawn's and if the overall aspect of the design isn't enough for us to distinguish them from the original 1901 [Recess] stamps, we can look to the lines of the globe (they are diagonal instead of vertical in the original issues..) .. but our 3 stamps are from the 1909/1926 Design, that bring us a new upper label 'Dominion of ' .. the rest of the design seems identical to the previous ones but with the diagonal lines in the globe.. several papers were used (usually known as Typography papers) and different gums also, so to distinguish the different issues in these 17 years, You have to be almost an expert in papers, and as we know I'm not one of them (as a consequence I will not show the SG codes [much more specific ] and only give the Sc code...)
1909/1926  "Universal Postage" Sc(131)

let us start now a brief passage through the Days of King George V and focus on his [Typo] printed definitive's of 1915/1919...first I have to say that the Yellow Green stamp it is not from this series , but it is also [Typo] printed and the design is the same (with a different background) , so I included this stamp in the image...there is another 1915 series that use an identical design ,but it is [Recess] printed...
all the orange brown 1.05d and yellow 2d presented are colored with different shades of the main colors...the series is not yet complete, because there is one more Grey black 1.05d ( the one that is missing has 2 diamonds in each side of the king's crown.. the one presented has only one ...) and a brown 3d..
1915/1919 "King George V" (6) Typo (Government Printer, Wellington)] Sc(144,161,162,163)

These are stamps from a pictorial series from 1935... some of the stamps like the 1d and 3d (and others that I don't have yet...) are really beautiful stamps... the brown 3d is for me one of the most well accomplished stamps, representing a Maori Girl.. (spectacular..!!) ..
there were two main issues of these designs.. the 1st in 1935/1936 and the 2nd in 1936/1942 ... they are different mainly because of the Wmk but some perforation details are also different.. both the series demand a lot from the collector to achieve a good classification of the stamps... New Zealand stamps are demanding for the collector.. if you have New Zealand stamps from the early days ,and you don't think yourself as an expert in things like Wmk's and papers,please think ,that perhaps it is better to leave the stamps for a future classification ,when you have achieved a higher level of 'stamp' experience..
Now I want to talk about the group of 4 stamps representing that strange bird, known as Brown Kiwi..the first representation of this bird in NZ stamps was in 1898, but these 4 stamps are from 1935/1942... there are 2 types of this design : 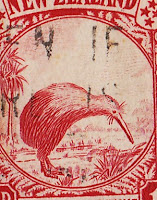 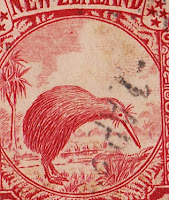 [Type I (Left)] the limits of the white 'Cumulus' cloud only 'descend' a bit at the right of the Palm tree, immediately above the middle of the Kiwi's back..(for a better appreciation, please see the 4th stamp...) ..some of the design details are somehow blurred..
[Type II (Right)] the boundaries of the white 'Cumulus' cloud almost touch the Kiwi's back and some of the palm tree leaves..all the design details are well visible...
As I said before the wmk is a decisive detail for the classification of these stamps.. I cannot see clearly the wmk's so the codes stay for another time and the stamps remain as "Need Wmk Detection' ... 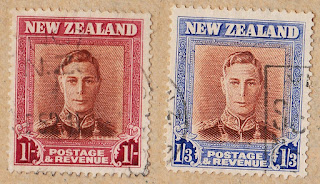 to finish this post ,we are now entering King George VI reign and I have a stamp from the Coronation issue and 14 stamps from the Definitive series with the portrait of the King...as we know the coronation issue is similar in most of the Colonies and Territories of the British Crown, but it is always a very well engraved stamp and the printing is always very , very good..the definitive series is very beautiful and the engraving work is very well done by someone of Bradbury Wilkinson...the king appears in a military uniform, with several Military orders and honors in his jacket.. Inverted Watermarks are possible in this issue ( the series was issued in two different times... the low values until 3d , except 2d , were issued between 1938 and 1944...the other values between 1947 and 1952..)... in the scarlet 1d stamp,could exist something called "broken ribbon flaw" (if You see the cross that descend from the King's neck , imagine that the link immediately above the cross is missing [and the lines from the uniform's background appear..] , so the first white part of the necklace is not connected to the cross...)
in the larger high values stamps there are two types [Type 1) there is always a white 'Aura' present. where the background lines disappear -like in a small value stamp-  Type 2) the white 'Aura' is still present ,but faded and the background lines do not disappear... the two stamps I present are type 2..].. the [Recess] printing work in this High value stamps was done by De La Rue 1937 "King George VI Coronation" (3) [Recess (Bradbury Wilkinson)] Sc(223)
1938/1952 "King George VI portrait" (17) [Des (W.J. Cooch)][Recess (Bradbury Wilkinson) small values (De La Rue) high values] Sc(226B,227,227A,228B,258,228C,259,260,261,262,264,265,266)
well , this is the end of the post... in a future post I still have some health stamps and I want to enter the reign of Queen Elizabeth II...Without doubts, New Zealand stamps are very demanding and this was a post where several of my 'stamp' frailties came to the light...I have to dedicate myself to the study of papers... I have already a large quantity of the Portuguese "Ceres" stamps to initiate this study, but it will take the proper time ...

Thank You again for your patience and.....