Some time ago, perhaps 2 or 3 months, I spent some time buying small lots in the Portuguese market... I found out this group of stamps from Vietnam and I immediately thought in doing a post about it... some stamps are from the North and others from the South, and we will see that they are very different , not only in the main subjects of the stamps but also in all that is related to the printing process...
It is usual to think that we must not loose the North, so let us begin by our guiding reference point...

This is a stamp from the 2nd series of North Vietnam...but , before start our "stamp talk" , I think that a little bit of the region history is necessary to understand the differences between the two countries... during WWII,the ruling France military forces were defeated by the Japan invasion, and the Emperor Bao Dai was nominated to rule the new Autonomous state of Vietnam...during Japanese "ruling" an indigenous resistance group has taken form and rapidly became a new player in the regional War/Power Games...this so called Viet Minh Nationalist Resistance was founded by Nguyen Al Quoc,that rapidly changed his name to be recognized and remembered only by Ho Chi Minh ("He Who enlightens") ...in September 1945 Ho Chi Minh proclaimed the Democratic Republic of Vietnam, and in 1946 France recognized the new country as a autonomous part of the French Indo-China...in the same year, the relations between the two powers became more and more difficult and from the end of 1946 until 1954 , Ho Chi Minh withdraw his forces to the North and from there he declared war to France...the stamps from this period (1946/1954) are now part of the first North Vietnam group of stamps...
This series has 3 stamps and could appear in both  not perforated (1951) or perf 11(1955) form .. when I had the stamp in my hand I immediately noticed that the paper is very,very thin and almost transparent...This is a relatively expensive stamp, so a stamp in this condition is always welcome..!
1951/1955 "Ho Chi Minh and Vietnam Map" (3) [Des (Bui Trang Chuoc)][Litho] Sc(2)

From the appreciation of these first stamps of North Vietnam we will see that Lithography was the chosen printing process and we can also find that in this period , most perforations are difficult to measure and there are cases where they are almost not recognizable... This series tell us something about the Battle of Dien Bien Phu...
1956 "Victory at Dien Bien Phu" (3) [Des ((Bui Trang Chuoc)][Litho] Sc(17,18) 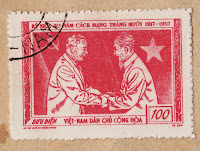 The "Shaking hands" design with two Communist leaders involved , is repeated in several countries under a Communist Regime.. we saw it in the Soviet Union , in Mao's China , in Kim Il Sung's North Korea and we  are now finding it here in North Vietnam, with Ho Chi Minh and Russian President Voroshilov...We can now say that this is another of the differences between North and South Vietnam Stamps... in the north, Politics and the Communist achievements in China and USSR are constantly represented in the stamps, while in the south, as we will see , a much more western view of the world is represented, with the World Organizations, Human rights, Child welfare, etc...
As I said before , poor printings and poor overall quality of the stamps (colors,perforations, etc) are characteristic of these first issues of North Vietnam...
1957 "40th Anniversary of Russian Revolution" (3) [Des (Ta Luu)][Litho] Sc(61)

The 1st of May is considered to be an important date for the working class and a massive achievement for the International Syndicalism...
there is no doubt of the familiarity of some of these North Vietnam stamps with the North Koreans, with the presence of flags and cheerful crowds...if there was doubts about the alignment of Ho Chi Minh's regime with the Soviets and Chinese powers , they were destroyed by the presence of the Communist Party Logo...
1958 "Labour Day" (2) [Des (Nguyen Van Khanh)][Typo] Sc(69,70) 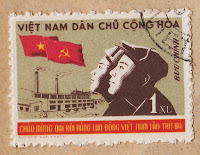 Now , I have here two stamps commemorating the 22th Congress of the Russian Communist party in Moscow (Right) , and the 3rd Congress of the Vietnam Workers Party (Left)..

Until now ,we have talked about those things that separate the North and South of Vietnam, but now lets name the two philatelic aspects that are identic in both of them...We can talk about the fact that most part of the series have just one design repeated 3 or more times with different colors and the other is the perforation that remains the same during long periods of time (I asked myself many times why does this not happen in our countries.?. why must the perforation change so often??) ... of course, with time (beginning at the middle of the 60's) this aspects also changed...
1960 "3rd Vietnam Workers Party Congress" (2) [Des (Nguyen The Vinh)][Litho] Sc(137)
1961 "22th Communist Party Congress, Moscow" (1) [Des (Trinh Quoc Thu)][Litho] Sc(176)

SOUTH VIETNAM
From the introductory lines about the History of this region, we can extrapolate that the South of the country remained under the influence of France... I do not wish to celebrate the presence of the French culture in the region, that is not my task and not part of my needs as simple collector and commentator of stamps, but I think that the engraving of stamps will be always a major positive aspect that increase it's Artistic value ... if we accept this simple thought , we must conclude that the work of Combet, Piel , Aufschneider , Pheulpin , Fenneteaux  and others is a joyful aspect to commemorate in South Vietnam stamps....

After we see some of these engraved stamps from South Vietnam, we rapidly conclude that they are not among the best works of the respective illustrious engravers... this is a fact to be expected if we notice the simplicity of the designs of the Vietnam Artists... the engraver, in most cases have stamps where a major part of the design is just emptiness, the engraver just have to fill the empty space , and that is much different from the complex designs of other artists where the engraver skills are much more at sight... when I say simplicity, I am not criticizing or diminishing the designs or the work of the Artists , in fact some of them are really very good in the field of Marketing and/or  Design... This one is a very good illustration where the Artist wish to commemorate the Trans Vietnam Railway.. nice..!
1959 "Re-Opening of the Trans-Vietnam Railway" (4) [Des ( Huynh Van Phung)][Engr (J. Combet)][Recess] Sc(116,118)

A beautiful Air Mail series where the simplicity of the illustration mislead us some how because there is advanced design behind all this idea...For those of you that are collectors of Air Mail series, I could say that there are very few of these series in South Vietnam Philately...before this series we only had the extremely beautiful Phoenix stamp of 1955 [SG (54)]...
1960 "Air Mail" (4) [Des (Do Hoang Ke)][Engr (J. Pheulpin)][Recess] Sc(C11,C13)

Here we have a much more elaborated illustration with a higher degree of difficulty for the engraver...As you can see the similarities between the two types of illustrations are not many.... in the first and much more common type , the human body and face are not used and not represented in detail and most of the illustrations themselves are at the final stage like logos or images that represents something...in the 2nd type, we have this illustration of President Ngo dinh Diem, with lots of Human body's , even the architecture of the ceiling is well detailed , a very nice and difficult illustration...this is a work of one of the Greatest French engravers, Jules Piel..
1961 "2nd Term of President Ngo Dinh Diem" (4) [Des (Nguyen Tan An)][Engr (Jules Piel)][Recess] Sc(159)

nice sports stamp celebrating the Sports among the youth...One important fact to highlight is the great regularity of all the issues, with series of 4 stamps , just one illustration and perforation 13...it is an easy period for a collector, if we compare it with the strange and somehow inexplicable  complexity of other Philately's of other countries...however , we can see all this 'need' of  detail as part of a machine idealized to prevent dubious utilization or just to please the collector, all these infinite combinations of papers, wmk's, perforations, printings, etc , just for the collector to have something to do...! if these difficulty levels didn't exist , all the fun around the act of collecting, research, patience, relaxation, observation, attention to detail, all of this would vanish and our life's as collectors would be more predictable and collecting would be just the Hobby of Prince's..!!..
1961 "Sports and Youth" (4) [Des (Truong Van Phat)][Recess] Sc(162,163)

interesting illustration! the stamp show us a young man carrying a torch [symbolizing the sport activity (we can see it in the previous stamps..)] , but beneath that, an ancient figure of some kind, perhaps Confucius or other Philosopher from Antiquity, and behind these two drawings, the Temple, or the place where people went to get some real education...and now the combination of these 3 drawings (the ideas they represent , of course..) would lead us to ??? Yes, to the subject of the series , that is Youth Moral Rearmament....here ,in a simple stamp we could see all the ideology of a regime, democratic or not ...Education , Religion and Physical Activity would make better Citizens...other Regime's , other Ideas..

[Left] a stamp commemorating UNESCO and it's achievements in ASIA and particularly in South East Asia ...it is again interesting to see that the illustration is based in the actual UNESCO's logo [Right] ...the original logo represent some degrees of a stair that lead to a Greek temple, for us in the West, the symbols of Culture and Philosophy...the stamp itself translate the Greek temple to a Vietnam Temple, also the place to learn and to be educated... very well done, beautiful idea..!!
1961 "15th Anniversary of UNESCO" (4) [Des (Nguyen Ai Lihn)][Engr (J. Miermont)][Recess] Sc(178) 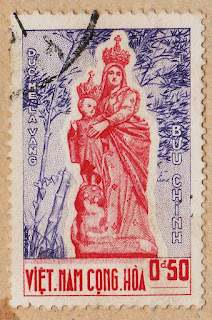 to end this small presentation of South vietnam stamps, I have a beautiful one designed by Jacques Combet and engraved by George Betemps... I do not bring here this stamp to give emphases to our western religion or something like that...! I only show the stamp because it is beautiful and due to it's difference relatively to almost all the others presented (exception made for the Air Mail series)...they are all illustrations made with just one color and are called Monochromatic stamps...the diversity of the illustration is based in the utilization of different shades of the same color and even the labels obey to this scheme...A great part of the collectors that dedicate themselves to the classics from 1850 to 1900 , only know and work with these single colored stamps.. let us remember the first commemorative stamps from France, the US, for example, and we will find very beautiful stamps designed and idealized in this single color World.. however , this stamp we are now facing is clearly Bi-colored , but in my opinion it would be equally beautiful if it was single colored...The illustration of Jacques Combet brought the stamp to a higher level,much more influenced by the French Quality and style..
1962 "St. Mary of La Vang Commemoration" (4) [Des (Jacques Combet)][Engr (George Betemps)][Recess] Sc(193)

I hope you have enjoyed this group of Vietnamese stamps, and briefly I will be back with some more stamps of another country or origin...