In one of my last posts I talked about a new lot of Iranian stamps I bought recently.. it has classic stamps,from the early days and modern stamps of the 60's and 70's...
we all know that most of the classic stamps are portrait or Arms stamps... all these Iranian stamps, like many other stamps have Arabic labels, and we should know that the writing of Arabic Manuscripts is an Ancient Art cultivated for many many hundreds of years in some of the older Universities of the world...so, it is not a surprise that we find spectacular labels in some of these stamps... the real surprise appeared with the mix of modern graphic design with this ancient Art in the 70's , where we can find some fantastic stamps,not only because of their creativity but specially due to its simplicity ..
Back in the West ,postage stamps were gaining a lot with the Boom of the Graphical Design , that in this time was exploring Logo's, new Typing Labels, colors, etc but it was a little surprising that in Iran the Boom was also taking place, mixed with the local culture and achieving high levels of creativity, as we will see..

let us start with some stamps of our friend Eugene Mouchon.

The 1900's brought a period that extended itself until the late 20's where we had a great number of overprints and surcharges, some of them really spectacular...

continuing with the same design,we find two of many other overprints that usually were all hand-stamped locally during the first years of the period of time I have mentioned above...
The first of them to be issued was printed at the top of the stamp and was originally from the year of 1901... the Carmine Red 1Kr stamp was initially hand-stamped with a blue overprint , and them in 1902 he was printed with another one in black at the bottom of the stamp...
Some of these overprinted stamps reached high cv being the Mint stamps at the top of the list (my old SG catalog 2006 Edition)
1902 "Surcharge and Overprint on 1899 Muzaffer ed-Din shah" Sc(209a,188,???)

I think that now is a good time to start our small visit to the 70's of Iran's Philately...

This is a first series from 1972 , and to speak freely , the 6r stamp has nothing special to show us except the symbol of the Tehran Film Festival that will appear a couple more times in this post...but when we look to the 8r stamp we immediately see many colors, the same symbol and various graphic elements very well combined as a oval shaped figure, doted lines in colored sequences, everything very well imagined and the final result lead us to the Poster world, with a stamp that could have been used as a poster , in a larger format..
I wanted to have more detailed images but experience told me that to much detail would blur the picture...these are all [photo] printed stamps ,so a low resolution scan was advisable...
1972 "1st International Film Festival, Tehran" (2) [Photo] Sc(1642,1643)

All the stamps from this period present large and complex wmks , and I cannot , even in my remote dreams ,know what they represent ...
Talking now about these two stamps, I can say that they were issued to commemorate the same event in the consecutive years of 1972 and 1973...the 'stand out' picture represent the Power of the Shah's Monarchy over different backgrounds and colors..the blue background represent us several Industries and Social sectors ,repeated one or more times, but the Orange/Yellow background of 73 is for sure much more imaginative for the time frame We were living...it is one of those designs that appeal to our vision to see different images in orange or yellow...very nice (of course, in our days this is common , but in the 70's it was not...!)
1972 "National Festival of Art and Culture, Tehran" (1) [Photo] Sc(1681)
1973 "National Festival of Art and Culture, Tehran" (1) [Photo] Sc(1725) 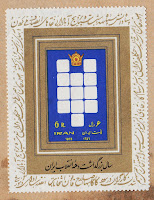 This is a series of stamps from 1973 , with two (iranian..!) normal sized stamps, one large sized stamp and a MS...the focus of the series is the 10th anniversary of the so called "White Revolution" led by Shah Mohammad Reza Pahlavi initiated in 1963 and lasted until 1978...the larger stamp and MS are both replicas of the 1r and 2r stamps.. both these stamps present us images made of different positioning of 12 geometric figures...why 12?? I don't know , but there is a explanation, for 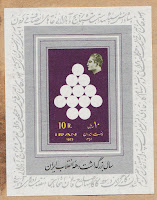 sure...! the 6r stamp is a very large stamp (7cm x 9cm)  with the same vignette as the 1r but surrounded by large Arabic Labels...

The 10r is a MS with the same Arabic Labels..

Two more stamps from 1973; the first one , at our left , represents a International Railway Conference in Tehran, and references to trains are obvious because of the presence of a railway forming  a spherical illusion, created to unite the world in it's center...it is a good and well accomplished idea giving form to a very simple stamp...
the stamp at the right is for me the simplest ,the most creative, the most imaginative and the Best stamp of this post !! if we see it without a closer view (clicking it !!!) ,there is nothing special about it, just a strong combination of Reds, Yellows and Dark Brown...after clicking the picture we see that the red center is made of letters and numbers, lots of them..! the stamp is about Literacy! The world Literacy Day! Beautiful... The Artist remembered to built a strange Earth , where it's center feeds volcanoes that vomit their 'educational Lava' igniting all the ignorance in it's way, transforming it into knowledge and literacy...in other simplest view , it just represents the Educational Fire..EXCELLENT!
I think this kind of creativity isn't very common, even among Countries usually at the front of the Graphical Design Improvement and Modernization.movements (like Germany, the US, and others..)
1973 "International Railway Conference, Tehran" (1) [Photo] Sc(1704)
1973 "World Literacy Day" (1) [Photo] Sc(1725)

Something very visible in this post is the lack of data about the designers and it is really something that I am not proud of... a reflex of that is the fact of my difficulty to build and write this post...I began to write it in the beginning of May, but a sudden lack of will to continue it  devoured minutes , hours and days full of pure Philatelic Emptiness... Accomplishment without Will is not possible.!.

Every time I see this "geometric" background ,with designs inside, I remember one of the Computer games that I really enjoyed playing in the 80's... it was the "Bandit Kings of Ancient China I" from Koei Co.... it was one of the first works of this company that soon would be one of the Monsters of Computer Gaming...what impressed me the most was the fact of the complete game fits in a 1mb disk, and has Battle boards with similar backgrounds representing different terrains (mountains, rivers, sea, weather, military units, etc..) and where the game reacts fantastically to the user movements.. trust me , I played it for a long time , and it was always surprising..!! all of this to talk about a 2 stamp series with not much to present except triggering Good memories..!
1973 "5th Anniversary of the UN Volunteers" (2) [Photo] Sc(1733,1734)

In this case, the design is related to something we all should know : the bonds between us make us collectively stronger and we could remember the strong words of the 60's in the 'Canned Heat' song  "Together we stand, Divided we fall".. The chain clearly represent the benefits of Cooperatives and of the Associative Movement... but in the end , I would have chosen another item to represent these bonds between people, because the chain could represent the benefits of a strong link, but also represents the danger of prison or imprisonment (and there is no form of prison more effective than Hunger).. so it is a nice stamp with a strong message but ambiguous (because the Artist is creating and eliminating the chain in the same message..) at the same time...
1974 "Farm Cooperatives Day" (1) [Photo] Sc(1786)

The usual 'uniqueness' of this strange Animal used as Graphic Logo of the Tehran International Cinema Festival , is again the main attraction of this stamp that plays with all the 4 colors presented , and the final result is a appealing stamp, once more using the simple tools that Graphic Design offer us.. nice work..!
1974 "3rd International Film Festival, Tehran" (1) [Photo] Sc(1847) 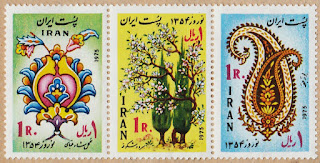 A very colorful 3 stamp series commemorating the New Year Festival.. I tried to understand the message of the stamps but it was impossible for me to decipher it...perhaps they are just paintings, colorful paintings ,with flowers,representing the birth of the new year, the Spring, .. perhaps..!
1975 "New Year Festival" (3) [Photo] Sc(1857a)

To end the post , I have a beautiful stamp that is a tribute to Teachers and their long days always spent being harassed by hordes of spoiled brats that only want to play games, see videos, talk on the mobile, take 'selfies',or just be modern children..
It is without doubts a profession that requires a lot of daily preparation, total dedication and many ,many patience , perseverance and Hard work... A Long Life for all the Teachers !!
1977 "Teacher's Day" (1) [Photo] Sc(1951)