Today's post show us some 50's and 60's USA stamps..
What is a  "Rotary Printing Press" (simplified definition..)?? ..  If you need more advanced article's , well, the NET is full of them!! More Advanced knowledge of the differences between Flat Printing Press and Rotary Printing Press are needed for the analysis and classification of some series that combine both methods..  I will leave here another interesting article about those early times of RPP..(pdf. file)
Scott catalog is one of the World catalog's I use in the classification of my stamps..by the 1st years of the 50's a new term appear in the US catalog.. sometimes there is RPP and others Giori Printing Press .. this GPP and others that appear in the above pdf. are all Rotary Printing Press method , but more advanced devices  that could achieve much greater velocities .. I think it had started like this..(until the Giori Printing Press, that is the last that interest us for this post...)

Now , let us start with the stamps..
In this post I have many individual Series (of one stamp only..) , so there will be many images and less 'talk' .. they are beautiful stamps..!! 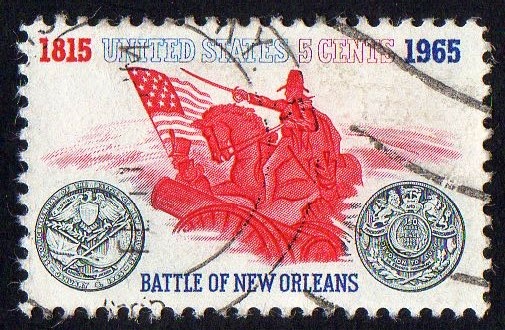 I will end this post with this beautiful stamp , representing General Andrew Jackson leading the US Army in  the Battle of New Orleans ; I leave this stamp to the end because I'm a huge fan of Battle's history and Military Tactics and because it is a beautiful, beautiful stamp.!..