Today I have some Italian Stamps to present, and they are from one of the last lots I bought , back in December 2013...In several of my posts I have talked about the importance for me of coherence when you buy a small or a medium lot of stamps... if you want to have a lot with stamps from the 30's , you have to search for one that has stamps representative of several of the main series of those days...this lot represents the Classic Period of King's Victor Emmanuel II and Humbert I of Italy.. I will present the second part in another post, but as you will see , the main series are all presented here... The bad part is that some of the stamps are not in the best 'shape..'..! when you are working with Italian stamps from the classic period, We must have in mind that a stamp in good or Very good condition, could reach high values but has the condition diminished , the value drops with increasing speed.. so , when you finish to read this post You have to have in mind that the value of the stamps presented here is zero or something similar...Why do I bought them??? well, I'm one of those collectors who think that first you must 'have' the stamp, know the story and sequence of the series , the strong points , the weak one's and then , with time , when the occasion meets, you buy better one's..  Enough talking...

first thing we have to see is that two types of cancellations are visible : one with points or lines and numerals and others , with the more recent circular 'look'... (this distinction help us to know what are the stamps from the earlier printings..) This is the last series of King Victor Emmanuel II and it starts in 1863 and ends in 1877...SG tell's us that the first stamps of this series - issued until 1865 - were printed by De La Rue, London and the last ones were printed in Turin...Another interesting aspect in this series is that all 'Royal Head' stamps have different frame corners.. I have to talk about one more detail that is the fact of the oval shaped Center could have solid Color frame or white frame (both with labels , of course..) .. in this small display we have only solid color Frames.. the chronology of this series goes like this..
1) 1863 ] Numeral 1 and 'king's' stamps
2) 1865 ] Numeral 2 (with varieties Brown, Pale Brown and Deep Brown..) and a 20c stamp without oval shaped center, in Bright blue or Pale Blue (it is the last stamp presented-- I think in the variety Pale blue--)
Sc(24,25) [Scottworld doesn't present the 2 Numeral color varieties]
Sc(26,27a,31a,35) [Scottworld doesn't present the Blue varieties of the 20c stamp] 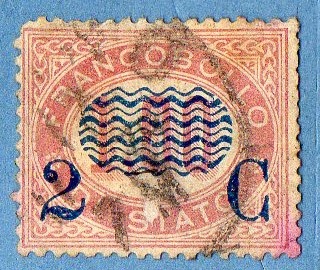 The stamp that is presented alone belongs to a series of  Surcharged Official stamps from 1878.. there is nothing to say about these stamps in particular...
1878 "Surcharge on 'Official stamps'" (8) [Typo] Sc(41)

the other stamps are from the first King Humbert I series... this series differ from the one's that come next , in the value that in this case is all stated in a written form... there are no numeric labels for the value...again , all the frame corners are different ; there are two stamps of 5c presented with the Green and Pale Green varieties.. I have also some color varieties of the 10c and 20c stamps , but I decided not to present them , because they are really not  in conditions to be presented... I don't have the 30c to show You  because it is not a common stamp , according to it's cv (£ 2250.00 Used)..
1879 "King Humbert I" (7) [Typo] Sc(45,45,46,47,48,50) 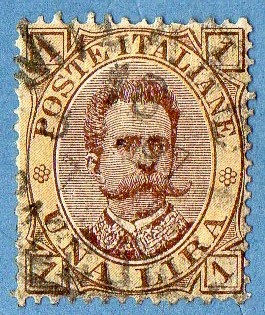 The first stamp is the only representative of the King Humbert I 1889 series ; in this series we can already find numerals as value labels and again different frames for each value...
1889 "King Humbert I" (6) [Typo] Sc(56)

From the 26 stamps I present today, none of them is a well centered stamp.. I think that this is another important aspect to retain... if We have a Well centered stamp in good condition , it's value increases...
Well , this was a short post with fewer stamps than usual, but I think that dividing these classic stamps in two posts was the right decision..