Today I have some nice stamps from PRC and Pakistan... The Chinese stamps were all stocked in a small envelope , and were bought perhaps in the end of 2012.. it was the last time I bought Chinese stamps.. during 2011 I bought large quantities of these stamps, complete years, etc.. One of my main goals is to end the 50's.. extraordinary stamps with the extra of ultra satisfaction...! every time I buy stamps from PRC I get a great deal of pleasure because it was from the beginning one of my Target countries (Yes, the pajama story--- an earlier post---!!) ...

This first series I present today doesn't have nothing special, in fact it is the weak point of PRC stamps I have today.. Yet, there is one fact I must remind you.. this is another one of the many stamps of the Master Designer Sun Chuanzhe .. this man designed almost all of the stamps from 1949 to 1953 and continued for many years after that , always designing stamps.. it is considered the major Chinese stamp designer and the first one to have International recognition... for me , and this is a personal opinion, he leaves a mark in almost of his greatest stamps.. it is the characteristic Currency label, as you can see in this stamp.. look in all the other China stamps i will present today, and compare.. they all are designed by Sun Chuanzhe..
This series is a rather simple one , simple design and Offset Printing.. One other aspect I want to highlight in the work of this Artist  is his great Versatility..he designed very simple stamps like this, some more complicated, portraits, landscapes and even some very complicated and elaborated historical stamps with guns , tanks, flags, portraits, everything in the same stamp..it was without doubts a complete designer, like many , many others who make our Hobby possible...
1952 "International Child Protection Conference, Vienna." (2) [Des (Sun Chuanzhe)][Offset (Shanghai Huadong Revenue Printing Works)] Sc(136,137) 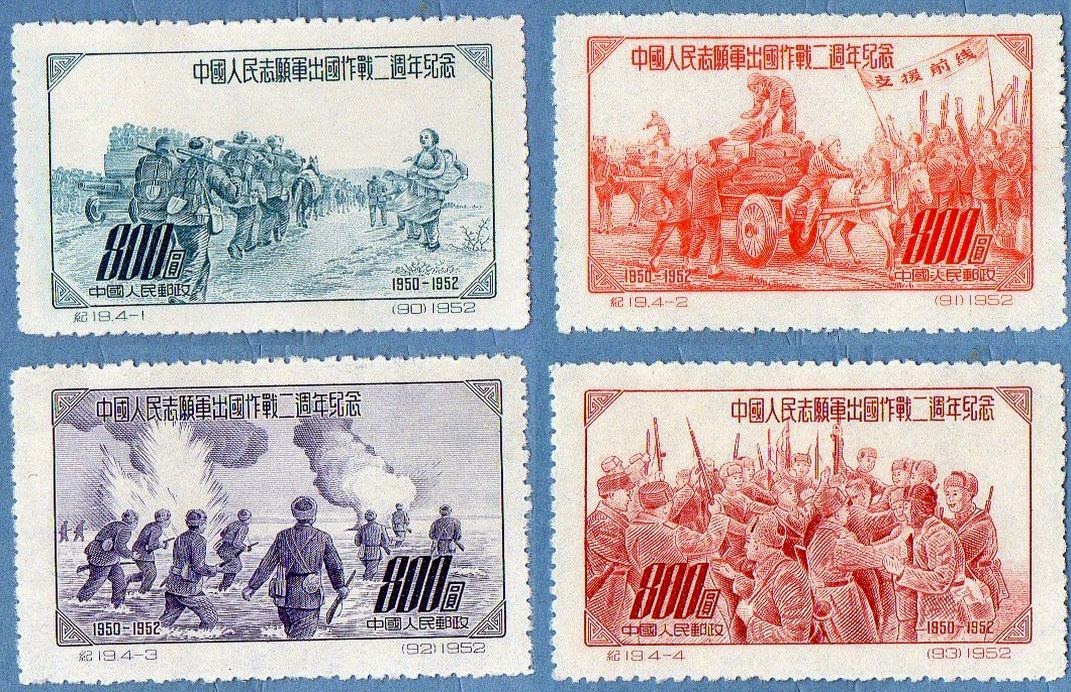 This series commemorates the presence of Chinese soldiers in the War in Korea.. all the Technical data of these stamps say that We are in presence of a Recess Printing but  my fingers tell me otherwise... the paper is very thin and I can't feel a thing , in either of the sides of the paper , it could be a piece of common white paper..!!!. these are for sure fake stamps..!.It was usual in Chinese stamps of those days to find mixed offset/Recess stamps, with the vignette printed in offset and the lettering in recess... this is not the case.. I must believe in the technical data I get in catalogs and internet sites, and they all tell me that these are recess printed stamps.. I present them the same way.. It is curious that only today , when I was classifying them , I noted this detail... well , apparently I've been Robbed..!!.
I've got one or two extra's that were already in the collection.. i am going to examine them and I'll let you know what I find in a future post...
1952 "2nd Anniversary  of Chinese Volunteer Force in Korea." (4) [Des (Sun Chuanzhe)][Recess (Shanghai People's Printing Works)] Sc(171,...,174) 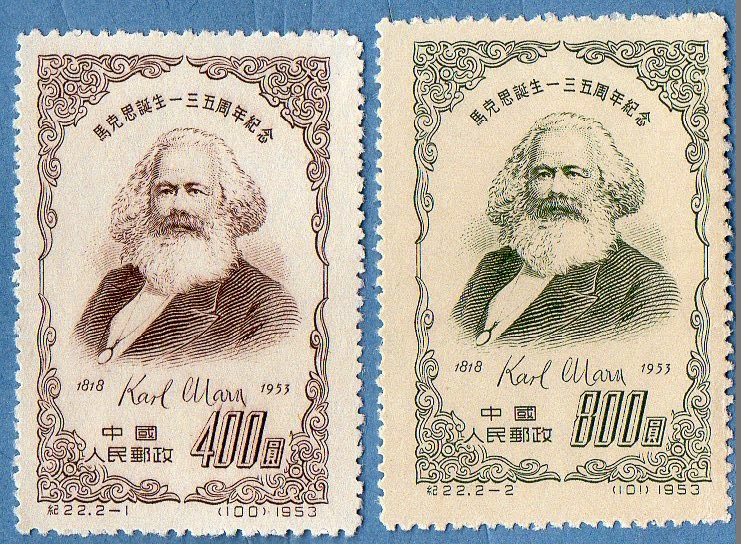 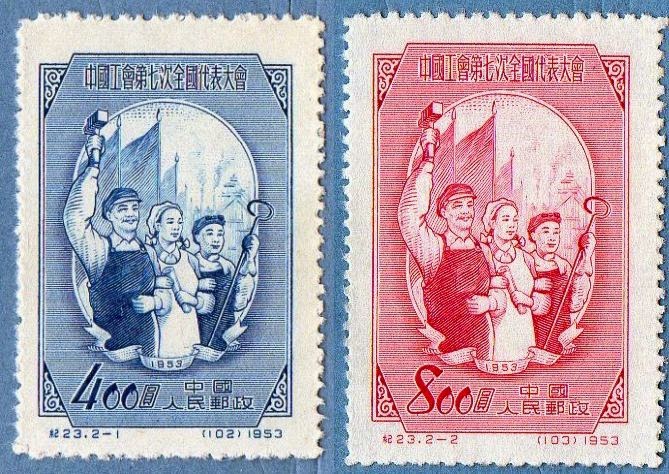 China must be along with North Korea , the champions of ' Flag Presence in stamps '.. there are flags and people cheering in almost every stamp.. it is a curious record..the other stamps are fake but these ones are originals for sure... beautiful stamps and nice printing...
1953 "Seventh National Labor Union Conference" (2) [Des (Sun Chuanzhe)][Engr (Lin Wenyi)][Recess (BPPW)] Sc(185,186) 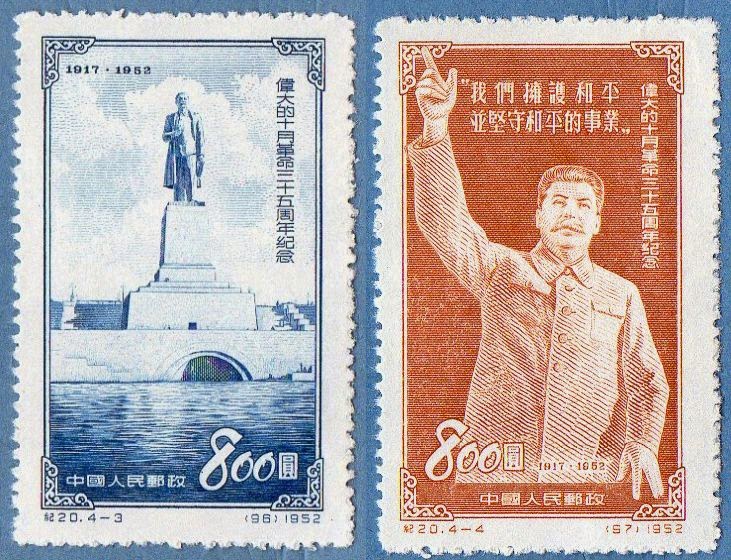 There are two important but well known facts related with this series... the first is that  exists another issue with the same designs but different colors.. the second series is much more valuable and scarce, of course.. the second detail is related only to the first stamp, the red one.. there are some Chinese labels in the bottom left of the design.. in some of these stamps a word was added .. the small arrow in the picture above indicates the extra Chinese 'letters'...it is another beautiful series where Lenin, Stalin and Mao Zedong appear to give more strength to the series..
1953 "35th Anniversary of the Russian Revolution" (4) [Des (Sun Chuanzhe)][Engr (Liu Guotong)][Recess (BPPW)] Sc(194,...,197)

stamps from the last lot I bought in December, with stamps of India and Pakistan.. 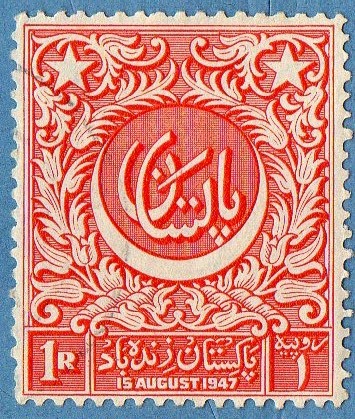 This is the first series from the Independent Pakistan.. The series show us monuments and buildings from Pakistan.. (1)Assembly building 2) Karachi Airport 3) Lahore Fort).. the fourth stamps show us the Crescent Moon and Stars surrounded by a Floral Ornament and in the center Arabic Labels.. this 1r stamp was designed by A. Chugthai and was beautifully engraved by De La Rue , London... There is a slight disagreement between SG and Sc referring to the perforations... there are two perforations in this series ... the An values and the r value.. in addition to this aspect , there are 1r stamps with other perforation, much more valuable.. The two catalogs give different values for the initial perforations and also for the less common 1r...My 1r stamp , and I've got 5 more, has 11.5 of perforation..
1948 "Independence" (4) [Des (A. Chugthai / 1r)][Recess (De La Rue , London)] Sc(20,...,23) 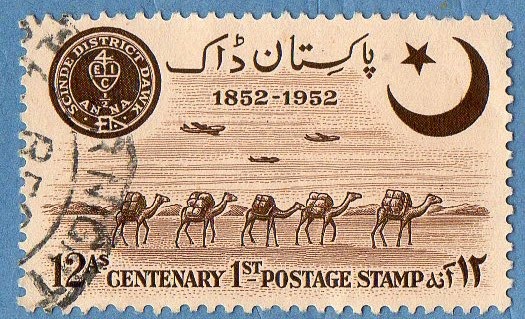 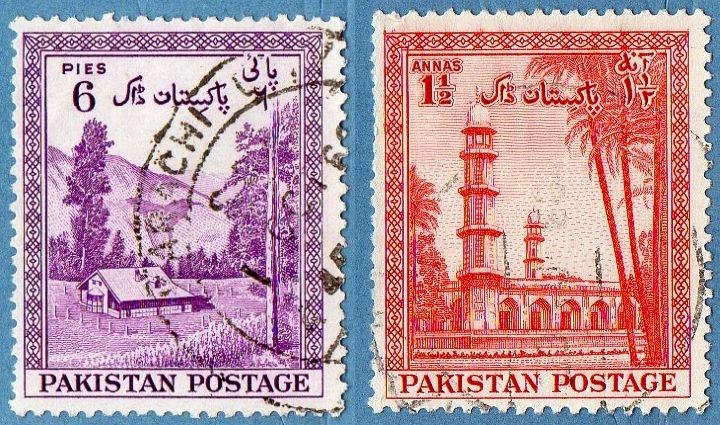 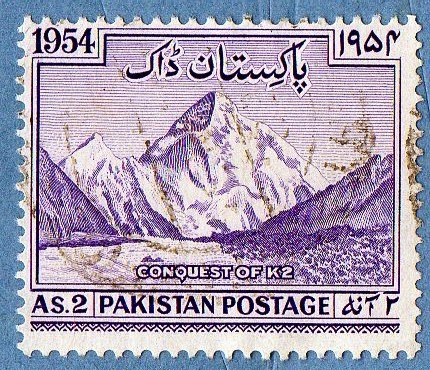 To clime a mountain is one crazy thing , but to clime one of the highest mountains on Earth , defying Nature in one of it's most extreme Climates, it is a Heroic achievement ..
1954 "Conquest of K2 (Mount Godwin-Austen)" (1) [Recess (De La Rue,London)] Sc(65) 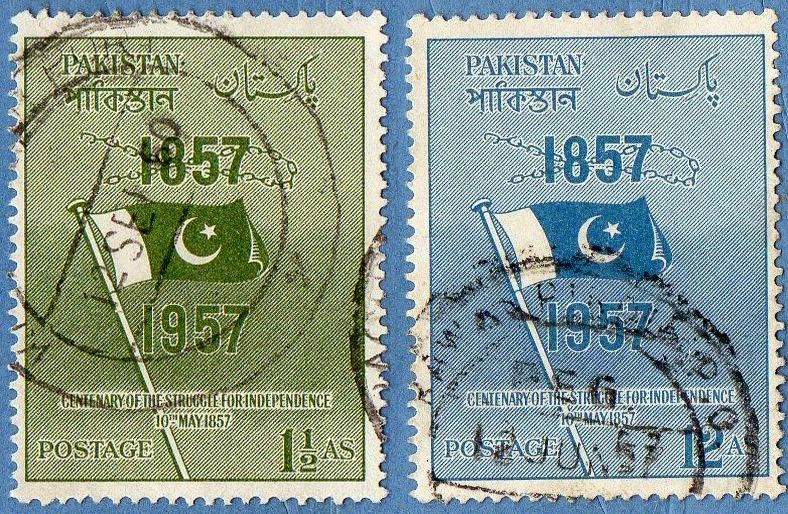 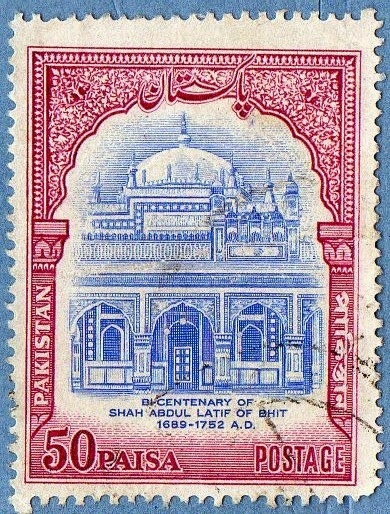 During this post , I had to interrupt the writing several times due to diverse situations...Sorry for the last part of the post where I was simply ' not in the mood' to write, but I had to finish it ... Sorry....