I've had the opportunity in other posts of saying that to collect Egyptian stamps is an excellent choice, not only because of the richness of Egyptian's Culture and Historical Background,but also for the Country's Central role in one of the most disturbed regions of the world... I always talked about the necessity of keeping Politics away from our hobby , because it is a subject that blur our objectivity and sometimes kept us away from a clear analysis of a stamp..., so let them Live and Play their Dangerous 'Games', while we remain peaceful and relaxed citizens, with our "Stamp Medicine"..

I think that the best way to start this post is to divide the time frame we are used to deal with (1850/2015) ,in several small periods of the Egyptian History..
I will leave you a link to an Wikipedia Article about the Egyptian History.. It is very good and relatively detailed (specially in this period that We need to focus..)..
The stamps I have to enter my collection today, are mainly from the 40's and 50's .. They are all [Photo] printed stamps, some of them very beautiful....another detail that I want to focus is the total absence of data about Designers, except in the period from 1980 to our days...I will try to get some of this information from two or 3 Egyptian Internet Friends .. perhaps they know something..
One more time I wish to say to the Egyptian Authorities that it is not fair to make an internet site with all the information about Egyptian stamps (Excellent site.. ) and keep it only in Arabic Language..YOU ARE LEAVING ALL THE WORLD BEHIND..!!
so, in this post You only will find less words and more dedicated to the history and Culture presented in the stamps and not from any more technical domain.. 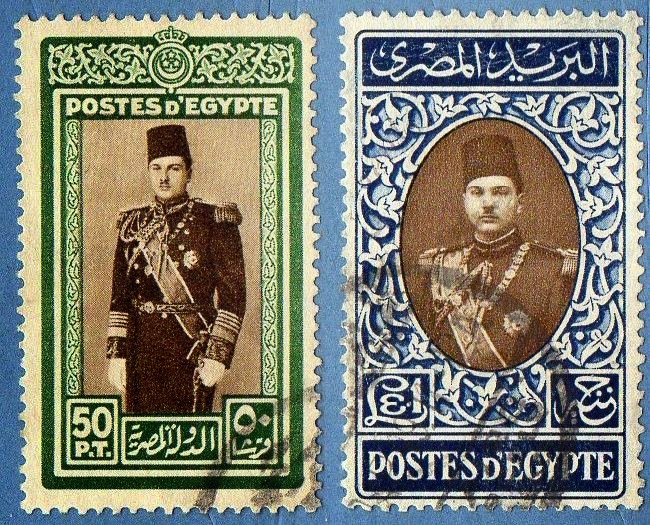 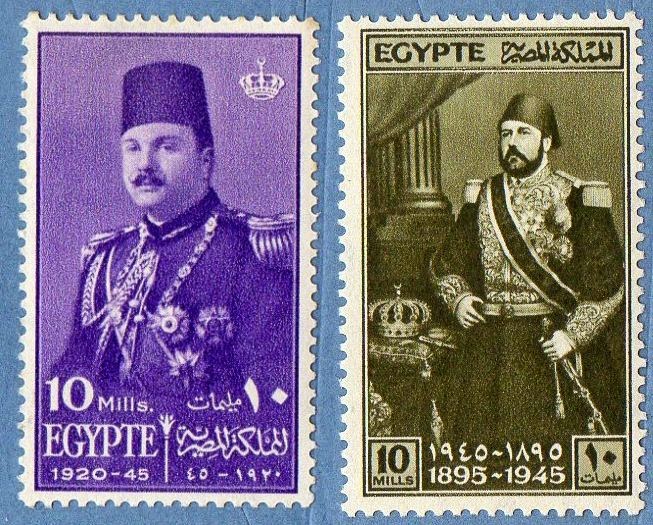 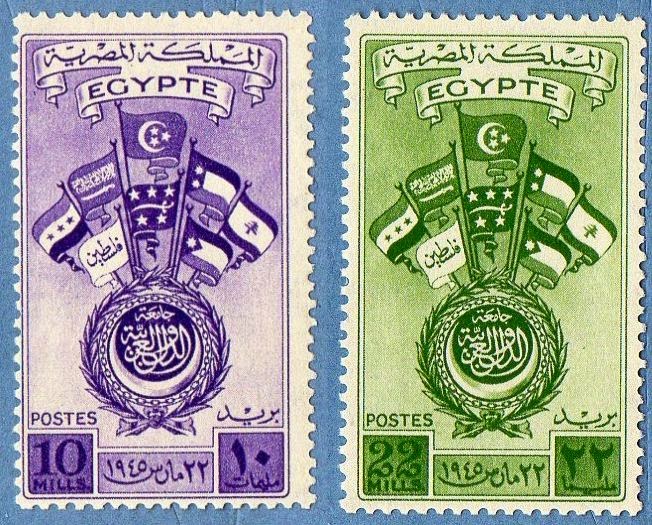 the stamps show us the logo and flags of the countries that participate in the Arabe League  Congress in Cairo..
1945 "League of Arab Nations Conference, Cairo" (2) Sc(254,255)

The first stamp show us a cotton plant and some cotton pickers, and the second  one is a commemorative of the life of General Ibrahim Pasha , one of the key figures of the Famous Naval Battle of Navarino.. It was in this small detail that I found a connection between the history of Egypt and Greece (another one...).. Yes, there is a 1927 Greek series of stamps about the Battle of Navarino, with the portraits of some important Personalities in the conflict and some designs about the battle itself and the reconquest of Key cities and places..Now , here it is one stamp with the portrait of the leading General of  the Egyptian Forces and a Battle Scene in the Background..
1) 1948 " International Cotton Congress, Cairo" (1) [Photo] Sc(270)
2) 1948 "Death Centenary of Ibrahim Pasha" (1) [Photo] Sc(272)

Sorry for the lack of Talk during this post ,but there is in fact , very little to talk about these stamps, except their obvious Richness in Historical and Cultural Facts and beliefs..the problem is that "Wikipedia" does this kind of talk , much better then I do..!!

I have many more Egyptian stamps to enter the collection, some from the UAR period and others from these last years of the XX Century.. It is sad that I don't have anymore any of those "Pyramid stamps" or other definitive's to enter , but they were already classified before I started this blog.. perhaps, one of these days I can buy a small lot , to finish some series and then we 'talk'...