Here I am again to start a new post about Mexico stamps..
Let us start by the beginning , as usual.. 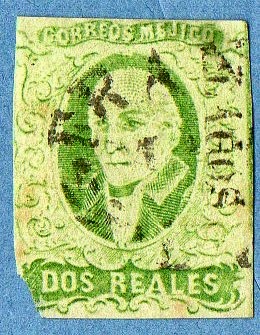 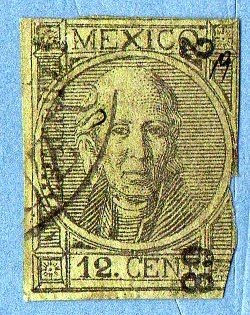 The first two stamps I have to present are both very damaged stamps but are presented because I don't have others...
Both of them represent Miguel Hidalgo Y Costilla  but they are from different dates and series.. The 1st stamp is from the first series from Mexico..from 1856 to 1865 , Mexico was a Federal Republic , and the Country label was "Mejico" and the Currency was the "Real"
in 1866 Mexico became a part of the "Mexican Empire" created by emperor Maximilian and the name became "Mexico" and the currency "Centavo".... In 1968 we are again in a Federal Republic..
The first design , at the left, is shared by two series , issued in 1856 and 1861, respectively.. In the 1861 series , the colors have changed...This is a 2r stamp from the 1856 series.. there are several varieties of this stamp, depending on the shade of green used.. I don't have another stamp of this value (neither from this series..!!) , but i think it is the most common and cheap variety, the Yellow Green ..The stamps of this series are all imperforated and all of them are hand-stamped with the name of the district... I don't understand what is written at the right side of the stamp, but if it is not the district name, than We are in front of a stamp a little bit more expensive..
Of course, i'm talking here about values for the 2r stamp, but it isn't this one, because this has no value at all.. it is physically damaged ( value = 0, in my opinion..)
1856 "Miguel Hidalgo Y Costilla" (5) [Engr (Villegas)][Recess (Government Printing Works)] Sc(3)
The 2nd stamp, at the right,, is from the After-Empire period.. as we just said it represents Hidalgo, again, and in my opinion it is a very beautiful stamp, much more than the previous one we presented..the design is very clear and it is a perfect work.. the stamps from this 1868 series have the district name Hand-Stamped and Overprints of the district number and abbreviated date.. The overprints are clearly visible (2º and 68) , but the district name appear somehow obscured by the design it self and cancel , so I made a closer image (at the Center)  , and yet , without knowing the District names, I cannot identify what's written.. perhaps "VERACRUIZ" or "VERACRUZ".. these district names are very important in these earlier issues , because there are some of them who are scarcer than others , and the value fluctuates according to this..
There are two main series with this same design.. A) Normal Numeral (the numeral is written with the same letter as the currency label...)(Normally, between Numeral and Label there is no dot [.]) B) numeral appears BOLD and normal label..( a dot [.] appears after the numeral..)
for each of the stamps of these series there are several varieties...in this case, I noticed when I was scanning the stamp , that it is printed using a blueish paper..so I can for certain tell that this is a "Black on blue Green" Variety.. at a first look there is the temptation to tell that the paper is of a color linked to yellow.. ( or a yellow green...).., but after looking carefully I could see that the paper is blue..to end this series appreciation, I must say that there are imperforated and perforated stamps, from all values...( the Value of this stamp is for me obviously =0.. it is highly damaged..)
1868 "Miguel Hidalgo Y Costilla" (5) [Litho] Sc(59)

In the last post I made about Mexico stamps, I showed two more stamps of these series.. not with the "Eagle and Snake" but with views of Mexico (two very beautiful stamps..) ; the series has 10 stamps, so there is one (5P) , the most expensive as usual, still missing... the first 7 stamps of the series represent the Famous Mythological duel between the Eagle and the snake.. I want to say a few words about the Unknown designer of these stamps.. it was certainly , just one more worker of Bradbury Wilkinson, but this man was with 90% sure responsible for many stamps from this and the next ' very agitated ' period.. Yes , as you can see by the Scans I leave here of Overprints and Surcharges of the civil War days (next..!) , the design is very similar to the frames of the 10 stamps of this series.. We can find a pattern in the utilization of these complex graphic work .
1899 "Eagle and Snake & views from Mexico" (10) [Recess (Bradbury Wilkinson & Co.)] Sc(294,...,300) 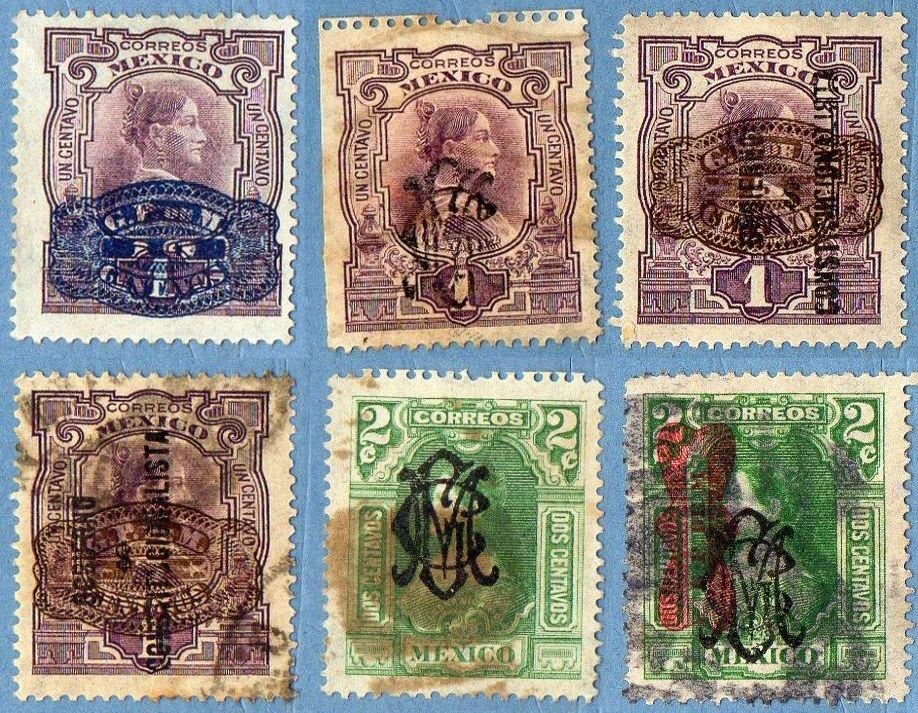 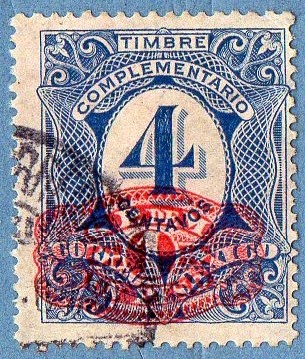 stamps from a series with various designs, one coat of Arms , one Sculpture and 4 portraits..This time , the missing stamp is the first from the series, the coat of Arms with the Eagle and Snake.. The stamps represent  (left to right):
A) statue of Cuauhtémoc B) Ignacio Zaragoza C)José Maria Morelos D) Francisco Madero E) Benito Juarez
1915 "Various Designs" (6) [Des (T.A. Rico)][Litho (American Book and Printing Company.Co, Mexico city)] Sc(501,...,505)

Well, I've got stamps to do just one more post about Mexico stamps.. I don't know about you , but they begin to be in the group of my Favorites.. not only by the History, the papers, watermarks, Overprints and surcharges, everything, it is a very challenging Philately.. I will see if  I arrange some money to buy more Mexican stamps.. I really like them.. perhaps in the future we can look into the 30's, 40's,50's and 60's to see how it look's.. very nice indeed..!