I talked several times of my 'passion' for Chinese stamps.. one of my goals in Stamp collecting is to finish the 50's stamps from China... I thought early this week in making a post about the Beautiful and long "Tian an Men" Series, but this requires that I use many stamps that are already in the collection , and I cannot  give myself this 'first time...'!!.. this is a blog dedicated to new entries and it will continue to be so...About a month ago , I bought  5 series from China PRC, from the 50's period , in order to continue the pursuit of the main objective..they all are beautiful stamps, with Great engraving and Design work and very nice printings.. this time there are no doubts about these stamps.. They are Genuine..!!..
As usual , mail from China takes about 3 weeks to reach Portugal (lots of time..!), so I received the stamps Wednesday...
In this moment I'm beginning to learn the full capacities of my Scanner... In this post I will use Scans with 400ppp , and the resolution is much better and the engraving and Printing details are more obvious to the viewer... But in the end i'm a little frightened, because the Scanner could scan to over 2400ppp!!!..it is a Great tool for the collector.. You can see details You haven't dream of !...The stupid thing is that after 4 years using this scanner , only now I'm learning this!!!!

I will start with two series from 1954, beautiful stamps..! (don't forget to click the pictures to see them in their full potential..) 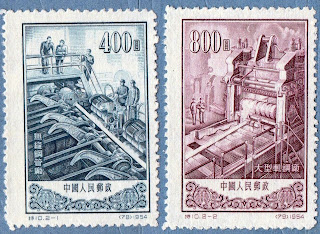 This is a series about the Industrial Development in China in those days... the two stamps represent factories in Anshan , the first a steel Mill, the second a Rolling Mill... it is quite clear the quality of both designing and engraving, with lots of complex and very detailed technical designs with the signature of Sun Chuanzhe , father of most of the stamps from 1949 to 1954 and even after...The presence of two engravers , being the engraving similar in both vignettes, could be explained by the Chinese letters and ornaments in the inferior part of the stamps, that are also engraved.. so I think that one of them engraved the vignette and other these frame components..
1954 "Economic Construction [2nd. Issue]" (2) [Des (Sun Chuanzhe)][Engr (Gao Zhengyu, Song Guangzeng)][Recess (Beijing Peoples Printing works)] Sc(229,230)

Again , technical development and Innovation are in order, with more complex designs ... the stamps show us the importance that Chinese government gave to the availability of skilled Factory workers, with a correct teaching by those who had the required knowledge.. in both the stamps , workers appeared in the Process of learning something about the machine they work with .... in these stamps we will find again two engravers, the lettering is again engraved , but the first Vignette Engraving work seems to me more mature than the second one ; in the other hand , they could be only Vignette and Lettering engravers...
1954"Technical Innovation" (2) [Des (Sun Chuanzhe)][Engr (Wu Pengyue, Li Manceng)][Recess (BPPW)] Sc(235,236) 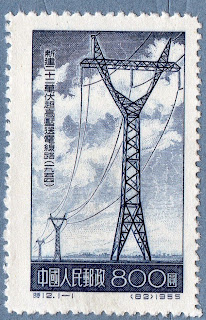 To understand this stamp and the stamps from this period of time , we have to consider that the country was initiating it's '1st Five Year Plan' of Industrialization and modernization... the Country's Electrification was one of the main points in this Plan, with the expected arrival of energy not only to the Major cities but also to more hidden and forgotten places... these Massive Power lines worked as the spine by which energy would flow , giving new purpose's and hopes to People through out the country... it is funny to see that even in the little details, the General idea was passing by and distributed to the population in general... In the scan of the stamp we can see a great city in the horizon, from where great smoke columns are visible , being as we all know , smoke one of the most Dangerous and harmful signs  of Industrialization (the idea that should be spread....) ; it is again a beautiful stamp .
1955 "Development of Overhead Transmission of Electricity " (1) [Des ( Lu Tianjiao)][Engr (Li Manzeng)][Recess (BPPW)] Sc(241)

We are beginning to see that this Plan was the main focus of all the stamps in 1954 and following years.. now we have stamps from 1957 and the issue is still Industrialization, this time a Truck Factory in Changchun.. in the first stamp we have a general view of this Very classical Factory and in the second we are already in the inside , seeing some Trucks being released from the Assembly line.. this is the time of small details and we can see some workers doing manual work in the trucks.. I like specially the 2nd stamp, because of the engraving ..it is a great work!!
We can also see that Economic changes were also taken place in the country... the Currency, as You see , changed in March 1955 (Fen,Jiao,Yuan)
1957 "Motor Truck Factory" (2) [Des (Liu Shuoren)][Engr (Tang Linshen, Kong Shaohui)][Recess (China Modern Times Printing works)] Sc(311,312) 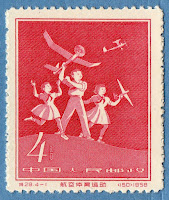 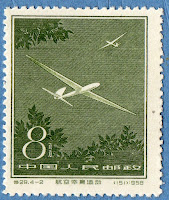 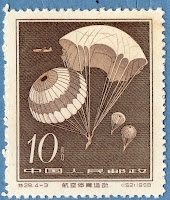 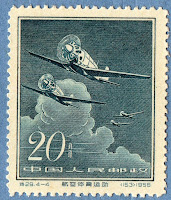 I think We've reached the end of this ' smaller than usual' post.. This was the post where I presented less stamps, since the beginning of the blog , in March 2014..The truth is that this should be only the first part of the post , the second being about Italy's King Victor Emmanuel III 1906/1927  series... the problem is that I rapidly realized that it was to much for a single post... The decision was made, and so , next week we have Italian stamps..!!