I promised in the last post that this time I would have some India stamps to present... well I picked  some stamps still from the British domination Period and a group of Personality stamps from the end of the 50's and beginning of the 60's... it is always a pleasure to find a country that year after year, continued to honor their Artists , Philosophers, Scientists , etc.. like in other things I tend to be somehow "radical" or "extreme" in my opinions about some stamps.. I think that a stamp itself has a very important role in the Mass diffusion of culture.. I wrote this few lines above just for You to think "Well, India began to do that in 1948 , but we are here doing it for 170 years.. there is no more people to honor..!.." Well, I think there is.. to give the history of any important people or Social Institution is better than to have series about Cartoon Icons,children drawings ,or other culturally empty subject..  I think it is better let the World know that the Fireman of the Year was 'somebody' , or the efforts to give to homeless people proper conditions, etc... I think there are plenty of subjects that will enrich the collector instead of giving him the increasingly common sensation of "just one more 'ugly' stamp" ... Let's face it.!.The stamps issued today don't have neither the Quality neither the cultural Background of other days..!!.. Is it my Fault?? Is it yours?? I think not.. but without knowing it we are among the millions of Guilty Collectors... We let things reach this point...  perhaps a non return point..!

I will start today this small presentation of India stamps with some stamps of  King George VI , still in the British Period..

I do not know for sure ( it is not in the catalogs..) what is the designer of these stamps , but i think that they are work of T.I Archer , responsible for many of the designs for British India and Indian States since the George V period...the series it self , presents us stamps from 3 different sizes ; 1st we have 4 small portraits of the King and them 9 representations of the Mail transport through time and 5 large portraits of the king.. the values of 12A,2R,10R,15R and 25R are missing.. (always the high values..!!). Like most of the stamps from last post, these one's need to be on the line for a better appreciation of the Watermarks ( visibility at naked eye is difficult ), because all values except the 6A could present Inversion of the watermark ...
India 1937/1940 "King George VI and Mail Transport" (18) [Typo] Sc(150,...,153)(154,...,159,161A)(162,164) 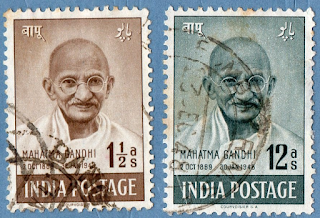 Stamps from the most famous India's Series, about the unforgettable Mr. Gandhi .. it is a 4 stamp series , and these are two of the low cv stamps... the 10R stamp is already an expensive stamp...I will have it someday...
It is a curiosity that all Commemorative stamps from India are watermarked except this series and the Nehru's Mourning Issue of 1964..after this 1964 series there are more unwatermarked stamps..it is strange that , to differentiating these two series from the others , they actually , take one thing that all the others possess...it is very understandable in India, a country where poets and ascetics abound and are revered and even venerated, but hardly accepted in our culture where if We want to highlight someone's life above others we will enrich our approach with sometimes several distinctive marks...
1948 "Mahatma Gandhi" (4) [Photo (Courvoisier)] Sc(203,205) 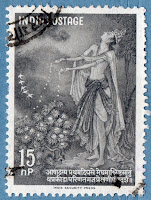 Another 1960 series about the life of another Poet from the 5th Century... one of the things I deeply regret is that  great part of India stamps are [Photo] Printed..In this series, for example, the work of a good engraver and a [Recess] Printing would increase the beauty of the stamps to a higher level... they are already beautiful stamps, showing scenes from two of the Poems written by Kalidasa..
the 3rd stamp was issued some years after, in 1963 and is simply a surcharge over the 1,3R stamp of this series...
1960 "Kalidasa Commemoration" (2) [Photo (ISP)] Sc(329,330)
1963 "Surcharge on 'Kalidasa Commemoration'" (1) [Photo (ISP)] Sc(371) 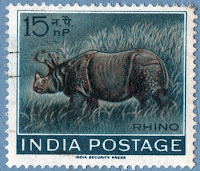 there are two stamps missing , but the elephant is really a "must have item".. i saw it some days ago, and it is a beautiful and majestic stamp...Scott consider that the 1st stamp is from this series, but other catalogs don't , and it is quite acceptable because if You notice the country label is different for this stamp...SG says that this is a stamp issued in1962 in the "wild Life week"...for now , we will keep it in the series..
1962/1963 "Wild Life Preservation Series" (6) [Photo (ISP)] Sc(362,363,365,366) 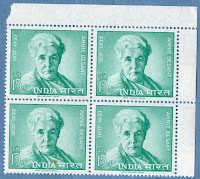 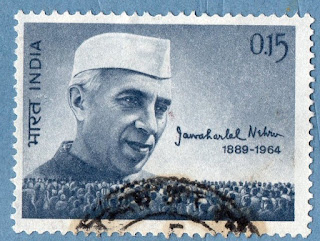 
I have calculated badly the number of stamps to use in this post.. I have many more commemorative's from India, but I choose only these one's for this post, but in the end they were not sufficient...this is not a good post... I really don't like it.. sorry!!