Today I will focus on some series from very different origins and Time Frames. Let us start with stamps from Yugoslavia..

Here , Alexander is shown yet as a young Prince in the last years of his father's reign...together with this design , another one presenting the king was issued..It is curious to see that with time and when we have more than one stamp of each value , we tend to study the stamps and try to find weak spots on the stamp, or points where possible errors, variables and other philatelic mistakes could occur.. in this stamp I was expecting to see differences in the Uniform of the Prince, but I found nothing..
The only stamp that is new to the collection is the 2p and finishes the Prince Alexander design (the others are spares and the 1d of the 1923 series) while one stamp of King Peter is still missing..
Yugoslavia 1921 "King Peter and Prince Alexander" (14) [Recess (ABNC)] Sc(6,7,7,2)
Yugoslavia 1923 "King Alexander" (5) [Recess (ABNC)] Sc(22)

This is the [Typo] series I was talking about.. As I mentioned in other post, my scans of [Photo][Litho] and [Typo] stamps are taken with an inferior resolution (300ppp), while in the [Recess] stamps I use in this post [600ppp)...in each stamp of these mono-colored stamps, there are several shades of the defined color , so we must know where to find our 'Catalog' color....in this case I think the color is the one of the Frames background...i present here 9 of the 12 stamps from this series ...
Other important thing to highlight after seeing these stamps from these 3 series is that a well centered stamp must have some kind of increase in it's value...We must also see that in the 1921 series the label immediately below the Oval Center is 'Kraljevstvo' while in the other series the label is 'Kraljevina'...
Yugoslavia 1926/1927 "King Alexander" (12) [Des/Engr (D. Wagner)][Typo] Sc(41,...,47,49,50)

Now I will start with a series from Finland.. this is a rather difficult series to classify, mainly because of the time frames involved.. the series was first issued in 1930 and the last stamp was from 1952.. in 1954 this 'Lion' Series was replaced by other one...I decided to show the stamps by Year of issue... at the beginning of the classification and after a first look to the design I was expecting to find some troubles with the stars (I call them stars, but they could also be flowers or whatever you want to call them...) and with the sword (I was expecting that in some of the stamps the space between the end of the sword and the star would be nonexistent...).. but once again I was wrong ... all the action was in other place..! (We will  talk latter..).. let us start the Chronological display of the stamps... 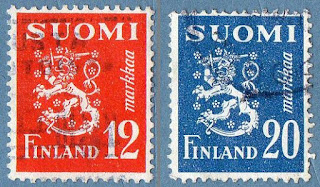 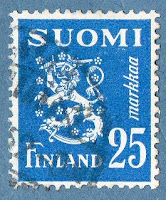 Well, in these series and after some math , there are 57 stamps.. I only present here 44 of them...let us see now where all the action is... if we look to the design it seems always identical, but there is one place where great variations exists...immediately below the top right star there is the lions tail... I will show some of the differences in the design ...this doesn't mean a thing , because they are only 'printing' problems I think , but as You will see , there are differences...these differences are random, occur in different year issues, and they don't appear in every stamps of the same value...

Now I will going to initiate the presentation of some stamps from a South African series from 1982 ...it is also a Definitive series (know as the 4th..) spread through some years...it has the particularity of join three of the main printing modes in just one series ([Recess], [Litho] and [Photo])...it show us some great buildings from South Africa and Commonwealth .. the Designs are work of A.H. Barret and they are really good... The series has also two main stamp formats , one for the values until 20c and other (larger) for the high values...The [Recess] and [Litho] printing modes occur in both , high and low values , and some values are even repeated with a different printing .. the [Photo] mode only appears in the 4 coil stamps issued in this series...

Is it a Man? Is it a Plane ? is it a UFO? No , it is a 'Philatelic Mistake'(something that is where it should not be...)I appreciate that someone with real knowledge of South African stamps, could tell me something about this.... it doesn't appear cataloged as a variety or other Strange thing in my 1996 South African Catalog...I only have this stamp, so I cannot conclude anything.. it is probably nothing of important as usual...