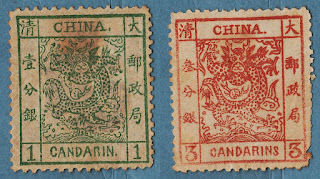 I will start chronologically as usual , with the first designs of the Chinese Empire ( Emperor Kwang Su 1875/1908) .. it represents a beautiful dragon,but if You watch the two stamps carefully , You will see that there are many differences between both designs...during the classification of these stamps we learn that there are 3 possibilities , depending on the paper... after a period of brief analysis I found , with great surprise , that I could correctly identify the paper... it is a relatively thin paper, but hard and strong at the same time.. it is a strange combination, but together with the fact of the design could be totally and clearly visible in the back of the stamp , it could only be a paper called "pelure paper"..so, I concluded that these are stamps from the 2nd issue of this design, from 1882.. the 1st was in 1878 and the 3rd in 1883...
I wish to say that for most of You , these are "Garbage stamps".. they are in no condition of being showed in a Blog and their value is almost zero in the 1st case and zero in the 2nd..but at the same time they are not very common stamps,and like myself, You could not yet have seen this designs in detail...that's the reason that lead me to show these first 2 stamps...the stamps are in a bad , bad state but the colors are vivid and alright and the design is correctly visible...they will take their place in my collection until better one's appear... ( these first 3 stamps .. these two and the next.... were given to me by a friend ) [ " A cavalo dado não se olha o dente " (Old Portuguese saying) ]
1882 "Large Imperial Dragon" (3) [Typo] Sc(4,5) 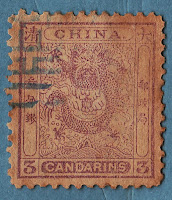 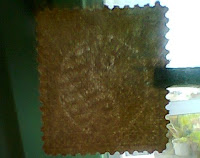 this is the other stamp I was talking about...it also represents the Imperial Dragon, but in this case the design is smaller and it is different from the first...this series present a beautiful Wmk, the first Chinese Wmk, representing the symbol of Yin Yang...I show at the right this wmk because it is clearly and easily seen at "naked eye"...there are some particularities with this wmk,because it can appear with several different forms, depending on the positioning of the small circle (at the upper right , in this stamp...).. there is many,many literature in the NET about these first Imperial Dragon series... it is something I enjoyed very much reading...the colors in this stamps are very faded certainly due to external influences of moisture or even light... I don't know..it is also important for the classification of all these first Chinese stamps to take a look to the Postmarks.. they can increase substantially the value of a stamp... in conclusion, this particular field of study is a "World" of information , and stamps are evaluated taking in mind several factors at the same time.. could be complex to buy or sell stamps of these series...
There were two issues of these stamps , in 1885 and 1888.. the two issues differ in the perforation (12.5 for the 1885 and 11.5x12 for the 1888)
1888 "Small Imperial Dragon" (3) [Typo] Sc(14) 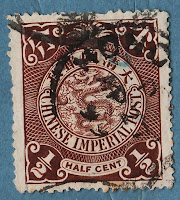 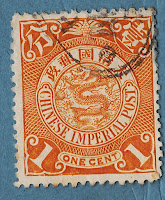 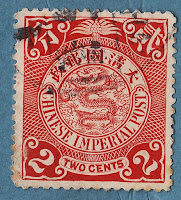 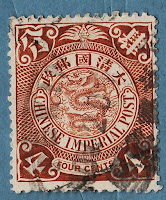 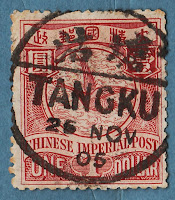 This series was issued for the first time in 1897, and two more times in 1898 and 1900/1906... in the 1st issue the label below the dragon is "Imperial Chinese Post"...well, all these 5 stamps have the label "Chinese Imperial Post"...so they must be from the 1898 or 1900 issues... if they have wmk (Yin Yang)  they are from the 1898 series.. if there is no wmk they are from the 1900 issue... in both the cases , we have 12 to 16 perforation.. (it is not a distinctive factor for these series...)... all the dragon stamps are from the 1900 issue because they have no Wmk... in the case of the 1$ stamp, representing a Bean Goose (beautiful design), the postmark called my attention.. it is beautiful and perfect... the fact is the 1$ stamp from the 1900 series was issued in 1906, so the postmark tell me that the stamp it is from the 1898 series.. the problem is that I cannot see the wmk.. I must wait for the day when a wmk detector "appears" in my house (?!?) .to correctly identify this stamp...
Another distinctive mark (much more obvious) between the 1st 1997 series and the others is the value label of the stamps... in the 1997 series the numerals are vertical and in the others they appear inclined towards the center like in the stamps I show (in the dragon stamps..).. now I want to talk a little about the designer of this beautiful series, R.A. de Villard, because after loosing some time searching for biographical data about him, I found ,curiously that there are hundreds of references to his name in the Net, linking him to the design of these stamps, but none information about his life... I can't even know for sure if he was French or German...these two possibilities exist , but in my opinion, he was a French Geographer, with the lateral skill in drawing, necessary in those days to exercise the profession, and an experienced map maker... (he is referred as the builder of the first Occidental map of some of the most important and most populated regions of China...he was also important , because he was the first owner of the famous block of 4 stamps of the Chinese 1897 3c Red Revenue stamps ; he sold  them to a Chinese Millionaire and known Philatelist  in 1927.. there is still many research to be done about R.A. de Villard, a strange man..!

Some more stamps of the famous 'Junk' design...it is a very beautiful design issued together with two other designs forming one of the most famous , studied and collected series in the world...as You know there are 3 major printings of this series.. the first, has taken place in 1913 and it is commonly known as the London Printing, with Engraving and [Recess] printing by Waterlow and Sons..in 1914 we have the 1st Peking Printing and in 1923 the 2nd Peking Printing... all of the 16 stamps presented are from the 1st and 2nd Peking Printings.. i don't want to enter in unnecessary details about the series... next time I have stamps from the 3 printings, I will lightly focus on the differences between each one stamps...no Sc codes , also.. (these are just stamps that exists already in the collection, so there are only a few new shades of some values...)

Here I have some stamps representing the President Sun Yat Sen , one of the personalities most represented in stamps (with several large series...)... the stamps shown are from 3 different series, and the last stamp is not from the president , but from the "Martyrs of Revolution" series...1) 3 stamps from the 1st series representing Dr. Sun Yat Sen.. the series was issued in 1931 and has [Recess] printing of De La Rue (excellent work , as you can see..)
1931/1937 "Dr. Sun Yat Sen (1st Series)" (7) [Recess (De La Rue)] Sc(290,292,293)
2) 2 stamps from the 2nd Series from the President... it was issued at the same time of the 1st one , but the design has a small ,very clear and obvious difference.. (the small sun at the top of the portrait of Dr. Sun Yat Sen has in this 2nd series a shaded inside circle.. it is very clear when You look to the pictures...these two stamps were already in the collection.. different green shade...no Sc codes..
3.1) An issue from the Northeast Province, dated 1946/1947... I couldn't find the right Sc code, so I show here the Michel (35 NEP) I use sometimes to classify Chinese stamps...
3.2) 1932 "Martyrs of the Revolution" (12) [Engr (De La Rue)][Recess (Bureau of Engraving and Printing, Peking)] Sc(319) 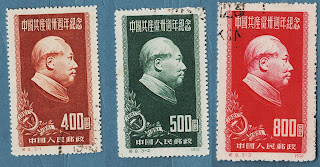 We now enter in the domains of the People's Republic of China , with this series honoring Mao Zedong and the Chinese Communist Party...it has a good engraver work and it is one more work of the Master Designer Sun Chaunzhe..he started to design stamps in 1947 and ended in the 70's and he is for sure one of the most prolific stamp designers of the world...this series, particularly, troubles me , because there are two issues, the original and the reprint, and unlike other cases, there is no distinction in the design between them.. it is a difference in the properties of the papers used in the printing that determines if we have an original or a reprint , and I cannot identify it correctly.. (comments are welcome, as always..)..
1951 "30th Anniversary of the Chinese Communist Party" (3) [Des (Sun Chaunzhe)][Engr (Wu Jingtang)][Recess (People's Printing Works, Peking)] Sc(105,106,107) ??

This is the first series of a Group of 5 called "Glorious Mother Country" .. these series focus on several important aspects of Cultural China...the first two series of this group are about the mural paintings of Dunhuang... it is curious that this designs are much more beautiful and appealing if we see the stamps in detail.. in a first view of the stamps, the drawings are not very appealing , but the engraving work done here  by Kong Shaohui increase very much the quality of the stamps...I challenge You to see first the stamps in this small format and then clicking above them see the pictures in detail...
Despite the fact of the following series of these group have distinct subjects , the presence of just one elaborated frame at the right ( it could appear also at the left, of course...) of the picture is common to all the 5 series...
1952 "Glorious Mother Country / The Dunhuang Murals (1st series)" (4) [Des (Sun Chaunzhe)][Engr (Kong Shaohui)][Recess (PPW,Peking)] Sc(151,...,154) 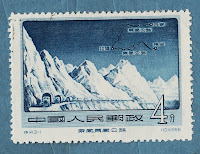 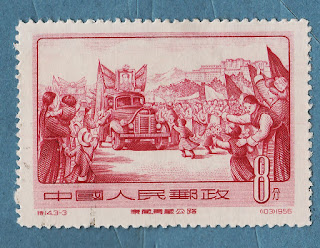 I think I have already shown the [left] stamps from this beautiful series... the only real new entry to the collection is the [right] stamp that show us the inauguration of the Highway, with the festive surroundings, flags and sheering crowd , so often represented in the China stamps from the 50's...This series is designed by another important Chinese Artist , in focus mainly during the 50's and 60's-- Lu Tianjiao --..these are for me examples of the very good stamps China has to offer us in the 50's... this time frame is my favorite and I have already many, many stamps from those days, but my real goal, is to have them all... this is not a distant goal, but others that I have are almost impossible to achieve , like that of the stamps issued in 1967... Do You imagine the amount of money I need to get all the 1967 stamps from China ??? it will be possible only  if something very strange happens..!!..
1956 "Opening of Sikang–Tibet and Tsinghai–Tibet Highways." (3) [Des (Lu Tianjiao)][Engr (Kong shaohui)][Recess] Sc(287,...,289) 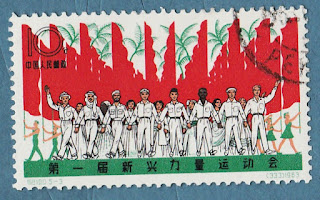 
I hope you liked this post.. this time I had more talk than stamps,but sometimes it happens...