Mozambique is one of those countries that in a particular time of it's history, 'gave birth' to some new Philatelic Entities that during some years issued their own stamps... we have the stamps of Mozambique Company, Nyassa Company, Inhambane , Lourenço Marques, Téte, Quelimane, etc.. today I have some new stamps from Lourenço Marques and Nyassa Company to enter the Collection...

I like to make some comments about these stamps , and I could start by saying that it is no surprise for anyone that reads this blog, that the Mouchon series is my favorite D. Carlos I series and one of my favorites between the portrait series from the classic days...one of the details that really impressed me in these stamps is the center background ... we can for sure say that Eugene Mouchon , the Designer and Engraver of these stamps was a good 'connoisseur' of Lisbon and perhaps of other Portuguese Cities.. if You look carefully to the center, You will see that it's background represents some of the famous 'Portuguese Sidewalk' , one of the images that every Visitor takes from Lisbon Streets...yes, the design represent those small rocks that , together, complete more elaborated designs... you can see here some examples of this famous sidewalk...
this is a design that was used in series issued in all Portuguese provinces and colonies , so we had a very large number of this stamps through out the Empire.. to complete all the series is something very difficult to reach...one of the extreme difficulties of reaching that 'small dream' is present in this Lourenço Marques series... the blue 25r with 12.5 perforation... it is a stamp that has a cv of € 200.00 , but in my opinion should be much more higher, because if you want to buy it, there is no one to sell it...!! those who have it, wisely keep it..!..
Let us now talk a little about these two small groups of stamps...there are two issues of this stamp in it's original form and several overprinted or/and surcharged... the first group have only stamps of the 1st issue of 1898...the 2nd group presents us stamps from different series...1st stamp) from the issue of 1903 [called "New colors"] 2nd,3rd,4th stamps) stamps from the 1898 and 1903 series overprinted "Republica" in 1911..the overprint was made in "Casa da Moeda" in Lisbon  5th stamp) local overprint in 1917 (You can see clearly the difference in the shape of the letters...).. after this small explanation I will only point the Sc codes of the stamps...
1 Group] Sc(30,31,32,35,36,38,44)
2Group] Sc(37,78,79,82,150) 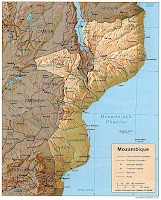 These are some of the new entries from the Nyassa Company Mouchon series..As you can see , these are Mozambique stamps overprinted "Nyassa"...Nyassa Company was granted the privileged by the Kingdom of Portugal of issuing stamps with the label "Companhia do Nyassa" in 1894.. Portugal's dominance over Mozambique was in those days always threatened by Great Britain and Germany... so in 1894 , the Nyassa Company was born , the land and 'people' were in British and French hands while the official Government remained Portuguese...the same thing was done to other parts of Mozambique... the Nyassa Company 'own' the territory of the Nyassa and Cabo Delgado provinces...in 1929 all this 'strange' process was reverted and the company ended  and it's territories were again absorbed by Mozambique, with the natural use of Mozambique stamps...

This is a very famous series , with the portrait of King Carlos I at the left corner, and vignette's with giraffes and camels designs..I must say that this series was for me a disillusion , because it is one of those series that I talked about in a previous post... the stamps are much better if not seen in detail... they could not stand the "Technology eye".. if we see them at 'naked eye', they seem beautiful stamps, well designed and well engraved, with beautiful colors.. in a closer view , with the proper scan, they seem very poor, specially the engraving work..the design is not bad but it is too simple and with lack of detail..., the portrait of the king and the mountains in background had a very poor engraver work...I think these stamps could have been much better , if the client was not " so easy"..!
I have the complete series shown above, and below some spares with nice cancellations...there are also some different shades , especially visible in the 200r stamp...

The design work was done by Sir Robert Pearce Edgcumbe... Sir Robert was a known Lawyer with relations to the Banking business and to Politics...however he had Artistic talent in a most private level ( Art studies are not known in his curriculum...)... the series was [Recess] printed by Waterlow and Sons, London and engraved by Herbert Bourne...
1901 "King Carlos I / Giraffes and Camels" (13) Sc(26,...,38)

When I was taking the scans of the giraffes stamps I was wishing that a better result could be achieved with a different approach to the design ... but no, the effort was again negative... bad stamps... but in the other hand , the new designs of this series, are all 3 of them quality works, good design and good engraving... ( the zebra is almost a perfect work [ I'm talking just of the vignette..]).. this time I have no indications about the Artists involved...two of the designs used, the zebra and the Vasco Da Gama's Flagship were already issued in the D.Manuel II series of 1911 ( stamps similar to those of King Carlos I, but King Manuel II portrait appears at the left corner of the stamp...) , together with the camel design , again...
1921/1923 "Various Designs" (20) [Recess (Waterlow and Sons, London)] Sc(108,109,113,114,115,116,121,122)