Today was the day when I should be presenting my stamps of the 1922 Portrait series...but after many time spent with the classification of 246 stamps, I've still had some "loose ends"... there are stamps that don't fit in any of the categories listed in the catalogs or that just fit in one of those where the very expensive stamps "belong" ,so I decided to stop and wait more time before doing the post... instead,I've got some stamps from the 1932 "Washington Bicentennial" , an easier series to classify.....
I want to talk now about something that is troubling me for a long time... As You now I've got two blogs,this one and the other about stamp Designers... lately, I am spending much more time with this blog and I've been somehow careless with the other... in my opinion, the Research about stamp Designers it is much more important than the activity I have with this blog... the fact is that the posts seem to be increasingly larger and demanding much more work .... in order to give more attention to the stamp designers blog , I decided to decrease the size of the posts of 1967Stamps, to avoid having to simply finish it..! Yes, finish it.. because I don't have time for two such demanding blogs, and the other is as I said much more Important, not only for me , but I think for all those who collect stamps.... 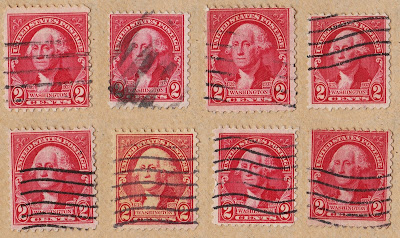 just look at the 6th stamp... it is very
different from the others.. not only the color, but the printing in general...it is also well centered. 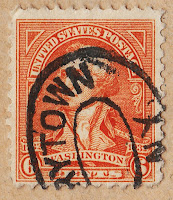 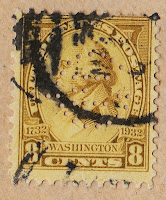 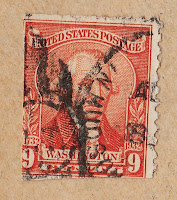 There is not much to tell about this series...As in almost all the US stamps since the first issues of the 1850's, we must have in mind that a stamp with a good centering is always more valuable than others..I will present in the end , the stamp I think is the best centered I have among these ..there are 4 or 5 plate flaws and minor errors to now of , when we are dealing with this series... I will not present them because I don't have any stamp representative...
however, I have a 3c stamp that has an error that is commonly know as "Broken top frame" ... it is an error that can appear to us with several different forms... the stamp I have has a "short top frame" and it matches one of the possible configurations of that error... 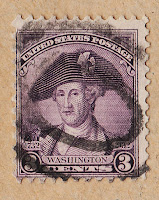 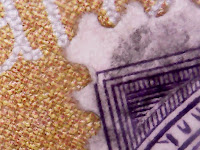 As You can see the top frame ends before it reaches the left external frame ,so there is a gap between them,, , they do not touch each other, as they should ....it is an error that don't give the stamp an extra boost in it's value , so it continues to value almost zero... the image presented at the right is an amplification of the desired part of the stamp....
I know that some of the stamps are not in the desired conditions, specially the 9c stamp.. I shouldn't post it  but it is the only one I've got an makes the series completed...
Another aspect I wish to highlight is one that is often forgotten... we should always take a good look to the stamps we are classifying...if possible , in our modern days, always take scans of all the stamps, even the spares and the most insignificant and common ones... that is why I think it is important when we are studying a classic series , to have a large number of stamps of each value... the fact is we can be surprised by the appearance of unknown printing errors, unknown plate flaws , new shades, etc.... I am saying this by experience,because in the last days  I have taken scans of many stamps and I've been surprised two or three times... here is one example taken from one of the most studied series in the world.. 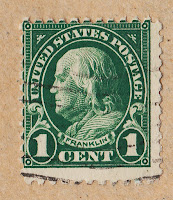 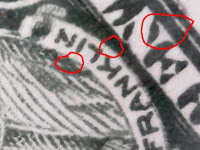 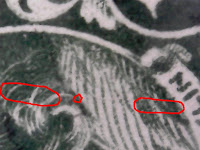 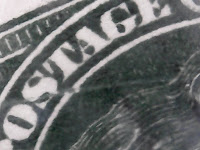 it is a Franklin 1c from the 1922 series, that in a first view it is the most common of all stamps, nothing to distinguish it from the others, except the small plate flaw it presents... You can see it right from it's birth (1st Magnification ) above the white bottom frame below the "N" of "CENT" and reappearing between the "N" and the white ground of the label "Franklin".. it pop up again above the "i" of "Franklin"  and ( 2nd Magnification ) crosses some of the engraving lines to reappear again in Franklin's curled Hair..then it crosses some of the portrait background ( 3rd Magnification ) to find and damage the inner circular frame and  part of the "S" of "POSTAGE"  ( it then continues ,but I think this is enough...) ...
You can say, what do I gain with this stamp..??. I say ,nothing!!! I just have a stamp that is not so common after all !!!... I like discovering small stupid things like this one..It don't make me richer , but it sure makes me a Happier person !!!

AND THE BEST CENTERED STAMP IS : 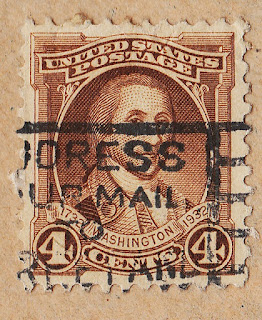 [ ...In my opinion ,we must let our senses talk...they will choose the best stamp... The top and bottom margins are OK,but  the right and left margins are not proportional .. This is the best stamp  but not a great stamp..!] [just to say that in my old SG catalog this is one of the first series where centering doesn't give an extra value bonus...]

well,this is the new format I want to introduce to this blog...more and smaller posts...
just talking about one or two series or something Philatelic that is troubling me.... I think it is the best I have to do...