This will be a brief post with some new entries from Uruguay... the period covered by this post goes from 1895 to 1930 and it has a great influence of the British and American Printings, specially from Waterlow and Sons, London...As usual, I don't have many complete series, but the stamps presented of each one of them are enough for some 'talking'... 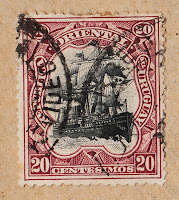 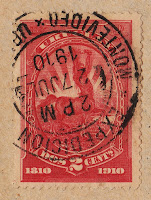 This is a beautiful stamp commemorating the Argentine Revolution or the May Revolution of 1810... I could not find the relation of this revolution , with the illustration itself... as you can see in a more detailed view of the stamp , it represents a Centaur ...(I guess I'm not so familiar with South America History..)   it is a beautiful illustration and a nice postmark as well...there is still a blue 5c stamp with similar design missing..
1910 "Argentine Revolution" (2) [Des (C.M. Herrera)][Recess (South American Bank Note Company, Buenos Aires)] Sc(182)

Another work of Waterlow commemorating the End of the Devastating WWI..it is normal that the stamp represents the statue of Liberty in New York, because the US still are one of the known ends of the "River of Hope" (people who search for better conditions , peace and freedom always sail this Mighty River..)
1919 "Peace Commemoration" (6) [Recess (Waterlow and Sons Limited, London)] Sc(217)

Finally a complete series!!.. A commemoration of José Gervásio Artigas , the National Hero of Uruguay and Father of the Nationality...in fact , the main subject of the series is the unveiling of a Monument to Artigas...
1923 "Monument to Artigas" (3) [Recess (Waterlow and sons Limited, London)] Sc(264,...,266)

I don't have many stamps of this nice series, but before I present them I must say that there were five different issues of the same design... they are all presented in the image above where you can see that despite the similarity of the illustration, all of them differ in the presence or not of several different labels below the bottom frame...
1st) no imprint below the bottom frame 2nd) 'A. Barreiro Y Ramos' Imprint below the bottom frame 3rd) 'Imprenta Nacional' imprint at the bottom center 4th) 'Imp. Nacional' at the bottom Center 5th) 'Imp.Nacional' at the bottom right.
All of these reprints are accompanied by small variations in the size of the stamps (I must say one more time that the images don't reflect these size differences...) and in the number of values of each one of them... 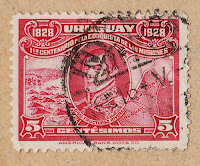 Single stamp series commemorating the Conquest of 'Las Missiones'...the illustration show us scenes from a Battle (I think...)  , a Map displaying the Geographical situation and at the center a portrait of General Fructuoso Rivera... this time all the engraving and printing was work of ABNC New York...
1928 "Conquest of Las Missiones" (1) [Recess (ABNC,NY)] Sc(349) 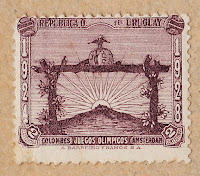 In the previous post about Uruguay stamps ,I showed another stamp (the 8c Ultramarine Blue) of this series.. now I have this beautiful stamp (identical illustration and design)  from , I'm sure, one of the first series commemorating Football (Soccer in US)..in fact ,the stamp commemorates the Uruguayan victories in the 1924 and 1928 World Cups...I leave here a video with the Uruguayan view about those glorious days in the Kingdom of Football (In spanish..)
1928 "Uruguayan Football victories" (3) [Recess (A. Barreiro Y Ramos)] Sc(388) 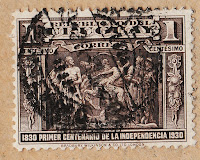 It is now time to present a "rare" , strange and beautiful series from 1930...the stamps are very affordable and common ,but the series is rare because it was one of the few stamp series where there was Peace!!! peace among Printing Companies!! it was a rare phenomenon specially in South America,for years ground for fierce battles between companies...this time , the 16 stamps of the series were divided by 3 of the Main Printing companies in the world : Waterlow and sons,London (7), Bradbury Wilkinson ,London (7)  and ABNC,NY (2)..
The series commemorates the Centenary of the Uruguayan Independence and has 12 different designs... I only have 3 of these 16 stamps , but fortunately I have one of each company...Great Series.. Must Have it!!!
1930 "Centenary of Independence" (16) [Recess (Bradbury Wilkinson & Co., London 1c)(ABNC,NY 2c)(Waterlow and sons Limited, London 5c)] Sc(395,396,398)

I hope you keep following the beautiful Uruguayan Philately and wish you some very nice time collecting stamps...