Today I have some new stamps from Monaco, with some additional 'spicy' taste brought by the presence of Czeslaw Slania among other engravers... the lot is very small, so I decided to increase the number of stamps, by joining 4 or 5 more Slania stamps , I already have in the collection...
let's start our Monaco stamps by Chronologic order, as usual..: 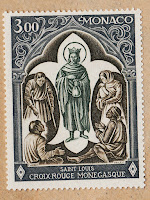 This is a 1970 stamp, from a group of series dedicated to the Red Cross.  These single stamp series began in 1968 ,showing Various Saints and Religious helping the poor and sick,  and ended in 1981 when a very nice and new Bi-stamp Red Cross series began , illustrating  the twelve labors of Hercules .. (Very nice, and we will see two of these stamps from 1982..) There is another curiosity in this group of stamps... almost all of them are designed by Pierrete Lambert , a French Artist of great importance in Monaco, with many , many stamps designed... her Stamp designer career started in 1962 and ended in 1997 , with hundreds of stamps designed for France,Monaco, and French colonies and territories...
1970 "Red Cross" (1) [Des (Pierrete Lambert)][Engr (Claude Haley)][Recess] Sc(767)

Now a 4 stamp series about the seasons of the Peach Tree... beautiful designs , again work of Pierrete Lambert and engraving of one of my favorite Engravers , Jean Pheulpin...his work for Laos, for example , is without doubts a passport to fame and eternity...do you know Laos stamps??
1982 "Seasons of the Peach Tree (Precancelled)" (4) [Des (Pierret Lambert)][Engr (Jean Pheulpin)][Recess] SG(1555,...,1558) 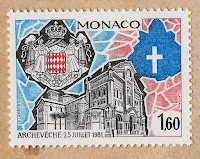 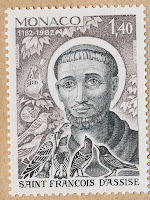 This is the first of the Slania stamps, and in my opinion it does not have nothing to talk about.. it is a nice engraving, and a not very much appealing design... I think the problem is really the Design of the stamp...
1982 "Creation of the Archbishopric of Monaco" (1) [Des (Pierrete Lambert)][Engr (Czeslaw Slania)][Recess] Sc(1338)

Ohhh..!! this one is very , very Good..! a stamp representing St. Francis of Assisi , with so many details to highlight, specially the great complicity of the Holy Man with the birds.. Extraordinary!!...The beauty of the design is well complemented by the Excellency of Slania's Work... Great stamp!!
1982 "800th Birth Anniversary of St. Francis of Assisi" (1) [Des (Pierrete Lambert)][Engr (Czeslaw Slania)][Recess] Sc(1339) 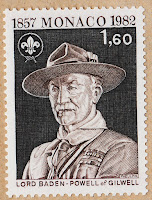 One more portrait stamp of Lord Baden-Powell , the creator and mentor of the International Scout movement..the importance of this movement is rapidly apprehended  by the collector ,who see's stamps from the most various Political regime's and Religious Systems , commemorating the genesis of the movement itself, the life of it's mentor or the ideas behind it...
1982 "125th Birth Anniversary of Lord Baden-Powell" (1) [Des (Jean Pheulpin)][Engr (Jean Pheulpin)][Recess] Sc(1341)

here it is the 6 year series about the 12 labors of Hercules... for each year, Monaco issued two of the 12 works , starting in 1981...these are the 1982 stamps, and we rapidly see that these are "MUST HAVE STAMPS"..! nice designs , good engravings are the only requisites for a good buy..it will only increase the already Big list of MUST HAVE SERIES from Monaco...
1982 "Monaco Red Cross / Twelve Labors of Hercules" (2) [Des (Pierret Lambert)][Engr (Claude Haley)][Recess] Sc(B102,B103) 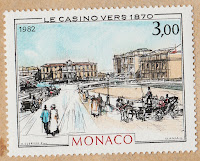 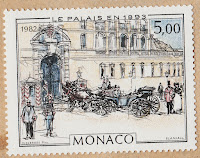 beautiful City Landscapes of Monaco on the "Belle epoch" Days...the design is beautiful, as I said but not the easiest to engrave...the work of Slania was difficult but the result is Good or even very good.

Before ending this small post, and as promised , I have to show some of my Slania stamps, that are already in the collection.. 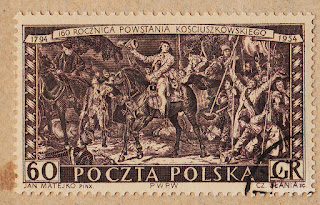 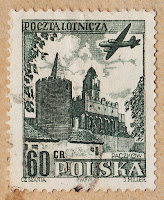 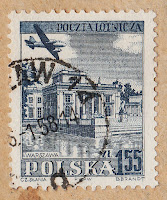 [Left][Right] Poland stamps, where Slania appears not as engraver but as the Designer of the stamps...these two stamps belong to a 6 stamp Air Mail series of 1954 where 5 of them are designs of Slania...[Top] this is a major example of the Art of engraving... very nice stamp,also from a 1954 (30 Nov) series with 3 stamps, being this one the only with Slania signature...[Bottom] just to say that it is a MS from Denmark with engraving work of Slania... NO WORDS!! 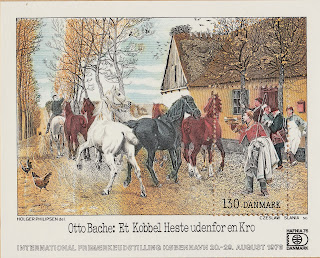 in two weeks time, I will have a new post about something I bought that was wanted for a long time...