the King, the City and the Perfin..

In November 2013 I was still in that period of time when there was  some financial availability to acquire some stamps that I desire in that moment.. I have in my collection some King Leopold II stamps , without the famous label attached... I remember reading in some catalog that stamps without that specific label have much less cv.. So, I bought some of them in a beautiful lot , with others from King Albert I and some complete series from the 40's and 50's..

Now it is time to present them and give them a place in the collection..

I remember one more time that there could be some light disturbances in the size of the stamps , but that is only because I made individual scans of the stamps ( during the classification), and then , to present them here I connect all the pictures and they could appear to be of different sizes.. but I assure you that they are have the right dimensions...!!(I'm jokin'..)
This is a beautiful stamp, full of incredible details, the frame is spectacular...for a better  appreciation , I ask you to give more attention to the brown 35c stamp.. the details are much more visible.. the designing work is of the Omnipresent ,at this time, Eugene Mouchon and of H. Hendrickx.. Of course , as it happens with almost the definitive series in my collection, the high value stamps are missing.. I really don't care , perhaps someday I could buy them...
1893/1900 "King Leopold II" (11,1) [Des (Eugene Mouchon)(H. Hendrickx)][Engr (A. Doms)][Typo] Sc(66,65,67,68,69,73)

Another king Leopold II series , with the king a little bit older... the two 25c stamps are in fact two different stamps, with different codes... we have the ultramarine Blue and the Deep blue 25c.. it is also a beautiful stamp , this time designed by Henry Meunier..
there are two catalogs that I need to buy rapidly.. the Scandinavian and the Belgium and Holland Catalogs.. there are always new details and varieties to know..
1905/1911 "King Leopold II" (7,7,7) [Des (Henry Meunier)][Engr (M. Ellis)][Typo] Sc(85,86,87,87a,88) 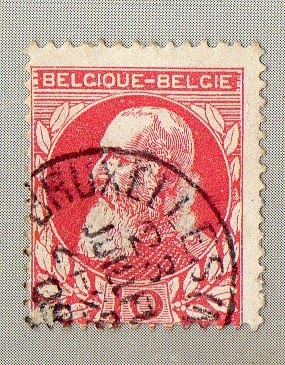 what happened to this stamp..?' the white color in the back of the King's head it isn't normal, I think .. I have already this stamp in the collection and I'm only presenting it here to ask for help in the identification... it could be the 10c presented above (without the attached label..) ,but with that white color issue... If You know something , please comment.. perhaps it is something I am missing , in the catalogs.. I don't know..

These stamps are older than the other ones presented before.. (I should have presented these first , but all that talk about the attached label , made me showing the others ..)
The numeral series and the King's stamp are presented in the same series in Scott Catalog, for example... I think it is a good idea, but I separated the two of them...
The numerals are really Master works...when I showed the 1893 stamps I said that the Design was of Eugene Mouchon and H. Hendrickx... well now We know who is the 'Frame Wizard'.. these frames are really spectacular and the similar appearance with the ones of 1893 led me to conclude that Eugene Mouchon had designed the King's Head and H. Hendrickx , the frames...In this case all the work frames , numerals and King's Head's  are work of H. Hendrickx..
Now, talking of the King stamps, we can say that all the values have different frame designs .. The first three stamps are only variations in color of the 10c stamp.. Catalogs tell us that there was a different printing with Aniline colors... well, this is still 'out of my league', and if any of the stamps presented are from this printing , sorry, I could not identify it...
1869/1870 "Numerals" (4,4,4) [Des (H. Hendrickx)][Engr (A. Doms)][Typo] Sc(28,29,30)
1869/1875 "King Leopold II" [Des (H. Hendrickx)][Engr (A. Doms)][Typo](32,32,32,33,37,34) 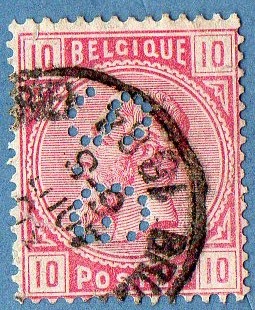 Here ,at the left , we have some stamps from a series representing the Coat of Arms of the City of Antwerp..The Green on Red of the 1st stamp  is not very visible , but the Red on Light blue and blue on Red of the 2nd and 3rd stamps are easily seen...these stamps were issued with the inferior label attached..
1894 "Arms of Antwerp" (3,1) [Des (H. Hendrickx)][Engr (V. Lemaire)][Typo] Sc(76,...,78)

Now and just to finish the post , I would like to make some considerations about the 1883 King Leopold II stamp presented at the right..there are no doubts about the correct identification of the stamp, but it presents also a perfin 'SG'.... I was digging a little yesterday , and I couldn't find anything.. however I find a stamp of Sudan 1922 that has the same perfin , so I'm confused.. I will left here a link to a Perfin group .. I will ask them for answers and perhaps in the future buy some of the books and catalogs available..

Update...[ I already have the answer from the Perfin question... Thank you to the Facebook Perfin Club that gave me this answer  20 minutes after I asked... I will quote "  The 1997 catalog of Belgium Perfins is still current. That looks like S54 with 15 holes in the S and 14 holes in the G with a period between. Soc. Generale pour Favoriser l'Industrie Nationale (Brussel/Bruxelles) Two of the e's have acute accents but I won't bother with those.".. ] updated 05/12/2014  20:50H