A few stamps 'German related' are presented today.. some Colonial and  Occupation stamps ...We will start in the Beginning of the XX century, with some colonial stamps and then walk through the 1914/1918 Great WWI and see some stamps from the German occupation of Belgium...in the end we have the period of time where Germany was divided by the Allies and the highlight will be in the French sector with some stamps from Rhine Palatinate...Between wars , we have Danzig stamps...
This post will look like a Geography lesson, and will be much helpful even for me , because I'm studying these maps , as I am showing them to you...

In the map we can clearly see the African Possessions (German East Africa and German SW Africa) and some of the Possessions in the Pacific Ocean (German Samoa and German New Guinea)..
The first stamps I will show belong to a series that we can call a Colonial series.. the same stamps were issued in all the colonies with the name of the different territories...here we have five of these stamps, representing five Colonies.. the stamp itself represents the Kaiser's Yacht 'Hohenzollern'.. it is a beautiful stamp , very well designed

This is one of the many versions of this famous German stamp, commonly known as 'Germania' .. it was issued , in it's original form , for the first time in 1899/1900... it was designed by Paul Waldraff , based in a portrait of the German Actress Anna Fuhring... this particular group of stamps was issued during the German Occupation of Belgium in the WWI years ., ; i needed almost 10 minutes to understand what was the difference between the first group of 3 stamps and the others... it is strange how we sometimes do not see what lies right in front of our eyes...there were three different issues of these stamps... the 1st in 1914 (1st group of 3) presents us the Surcharge in 'Centimes'..the 2nd in 1916/1918 , in "Cent" (all the others) and the 3rd in 1916 , where the label "Belgien" is omitted and the surcharge presented also in "Cent"..
1) German Occupation of  Belgium Stamps 1914 "Surcharge in 'Centimes' over 'Germania' stamps" (9) [Des (Paul Waldraff)][Typo] Sc(N2,N3,N4)
2) German Occupation of Belgium stamps 1916/1918 "Surcharge in 'Cent' over 'Germania' stamps" (16) [Des (Paul Waldraff)][Typo] Sc(N10,...,N18)

The city of Danzig and it's surroundings had already in the past some autonomy, due to it's important and strategic highly developed port..in 1920 , and after the WWI, it was granted to the City some Autonomy, and with the special condition of not be a part neither of Germany neither of Poland , but it had to grant access to it's Port to Poland.. It was then named "Free City of Danzig" (it was not a independent Country and remained with the League of Nations Protection..).. the city, Historically had a great majority of German citizens..

these are stamps from the 1st series from Danzig.. this series is constituted by Typo printed 'Germania' stamps for the lower values (pf)(and for the 4M value..)  and recess Printed larger stamps with various designs for some of the higher values (M).. The  2M stamp represent the Allegory of the Union of South and North Germany.. in the 5M stamp ,Wilhelm II is speaking in the 25th Empire Anniversary Celebration..All of this stamps are German stamps and are all Overprinted with "Danzig" and are wmk..
1920 "Overprint 'Danzig' over German stamps" (15) [Engr (Prof. W. Roese)][Recess 2M,5M][Typo /others] Sc(4,11,14,15) 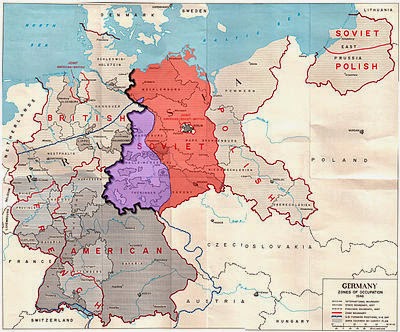 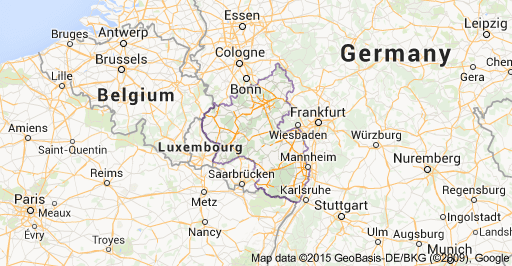 Now, let's back to Geography... in the end of  WWII, Germany was divided in sectors , among the powers that had fought in the War.. so there were 4 main sectors and several little one's.. there were a Russian , USA, UK and French sectors.. (map at the left...)... the map of the right show us The Rhineland Palatinate, one of the zones of the French sector and the one responsible for the stamps I have to show now..it is curious that this region is today one of the main regions of Germany , voted in referendum in 1947...
The series I present now is issued with different designs in Baden and Wuttenburg, other regions of the French Sector..The design is work of the Lithuania Designer Vytautas Kazimieras Jonynas who later in his life went to the USA, and acquired also the American Nationality..these are indeed beautiful stamps ...
Well,what do We have to say about this series..?? the series has 12 different designs and  it was issued 3 times with light differences.. 1] the first issue (first 3 groups) is labeled in pf and M 2] 2nd issue (4th and 5th groups) has new colors and sometimes designs with different values, but what is important in this issue is the coexistence of currency labels pf ,dpf and DM (5 values in dpf and one in DM) 3] 3rd issue ( 6th group) is easily recognized , because it don't present any currency label, only the value..
Caution is required in what concerns the Karl Marx stamps of this series, because there could be a variant due to a small difference in the 'K' of 'Karl Marx' ..

I've got many more stamps from Danzig and some more from the other zones of the French Sector, but I'll present them in another future post...
I wnat to say some words about something I said above in this post... I use the My collection SG Catalog, just to have cv relatively actual, but I want to say that it is not one of my main interests in Collecting stamps.. the cv has it's importance specially because of everything that concerns with varieties and unusual events that could exist  with stamps.. For me collecting is just ... having stamps..The more, the better...!!

Well, I think I reach the end of this post.. hope you like it and that it could be helpful in some way...