I was thinking , in the beginning of the week , to present some Bavaria stamps.. But Wednesday I remembered this Hungarian series and so I started to think in a post  about this famous Numeral series ...There is much to say , but there is nothing new to say.. many people have studied this series profoundly , during years of research, with many more resources...collectors of this series have many items of each watermark, are always searching for wrong positions of Watermarks, there are many different shades and possible combinations of several factors at once...

now I will use, the most perfect stamp I have to show today.. it is a stamp in excellent conditions.. I will use it to talk about the general design of this series.. 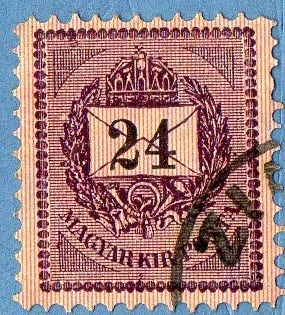 the design presents us the St. Stephen's Crown (Hungary Crown) over a mail envelope and Postal horn, surrounded by a laurel crown..Four Corners are presented and a frame of dots.. labels appears below the Central design... in this stamp we can see also the Vertical lines as the stamp Background... 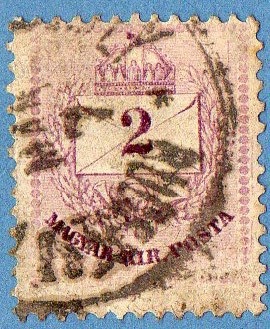 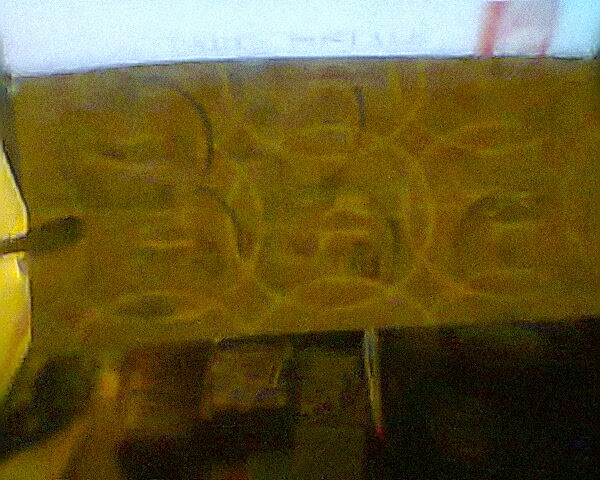 The first picture show us the series with all the 5 values... of course we have to remember that in order to have the series in it's most complete form , we must have these 5 values for each one of the 5 perforations that are possible..I want to talk a little about colors.. when you are defining what is the color of the stamp or just trying to find the color you read in catalogs, have in mind both the color of the design and the lettering and numeral color...
There are two different varieties possible when we are talking about the 4 corners presented in the design (not the corners of the frame , but the one's that are designed immediately below the labels "Magyar Kir Posta" and on both sides of the crown.. In the 1st variety these corners appear well defined and sharp...in the 2nd , they are somehow blurred or even partially missing.. that's what happens with the 2k stamp (at the right) , where along with it's bad condition we find no corners or find them with difficulty...you can see also the 3k witch is in better conditions.. 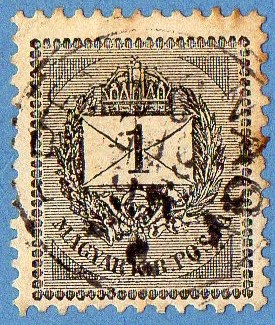 I will start this small talk about the 1st "Black Numeral" series, by talking about the 1k stamp.. there are two varieties of this stamp.. one where the numeral is printed in a separate operation, being first printed the designed and them the numeral.. in this case the numeral use to be darker than the overall black used in the stamp... in the 2nd, the numeral is included in the plate , and in this case the central part of the envelope is removed to create a small space in either one of the sides of the numeral...
to continue with the analysis I will say that in the first 3 values of the series, there are no vertical lines in the stamp background, as you can see in this 1k stamp... in this 24k stamp , like in many others, you can see these vertical lines , outside the frame..
well now we are in presence of a 3 stage Printing operation:
1) [Litho] the Vertical lines in all the stamp
2) [Typo] all the design
3) [Typo] Numeral

A curious point in this series, is again related to the colors..in values superior to 5k the stamps are presented as being bi colored.. in a first glance we only see the general color of the stamp.. later we understand that the other color is the color of the vertical lined background of the stamp.this fact is clearly seen in this magnificent 24k stamp, and the color is "Purple and Red", being the overall color Purple and the color of the vertical lines Red.. this is difficult to see in most part of the stamps...
This series is also watermarked with a large Kr in oval , as I said before..
I present many shades of some values because i think they all have differences..
1888/1898 Numerals" (14) [Des (Janos L. L'Hiver)][Litho / Typo] Sc(22Ac,25,27a,28,29,29,29,30,31,31,31,31,31,32,33,34) [the 2nd and 3rd stamps were misplaced in this series... sorry..] 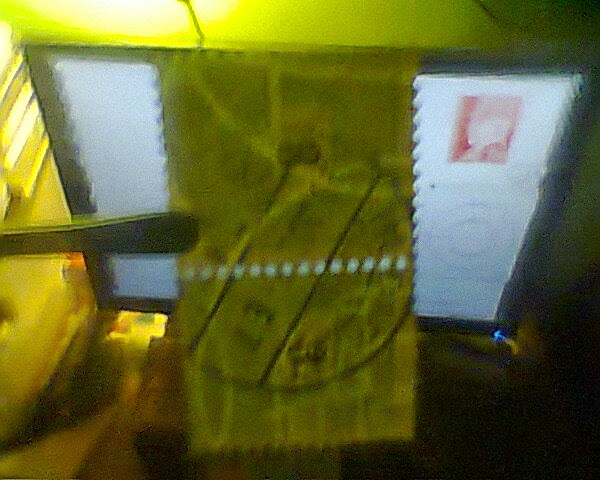 This is the 3rd series of "Numerals", with a different Watermark.. This watermark presents us the Crown of St. Stephen , at the center of a Oval or circular figure... The image at the left presents us part of the Crown in Oval figure...this watermark is only visible in it's totality in a block of 4 stamps...This series is subdivided in four series Sub Series..
1) Perf 12 x 11.5 and Crown in Oval figure
2) Perf 11.5 and Crown in Oval figure
3) Perf 12 x 11.5 and Crown in circular figure
4) Perf 11.5 and Crown in Circular figure..
stamps with  Perf 11.5 are much more valuable.. Seems that I was lucky in this lot , because I have some of these stamps... The real problem with this series is to identify the watermark in the space of one stamp.. I think it is a little strange that any part of the design has been altered also.. there should be a clue in the design to help us in this moment... but the truth is "I cannot find it.." .. so I cannot leave the Scott codes , because i don't know what is the watermark of each stamp.. oval or circular..?? strange , isn't it?? I need to buy a big lot of these stamps , just to have material to study... perhaps then I'll reach to a conclusion... perhaps some Hungarian friend , could share some light into this "Dark" moment..!!.. An Hungarian Catalog, please !!...

Before I leave, I must say that there is a difference in some stamps.. even with the presence of those vertical lines that forms the background of the stamp ( not of the design..) , some stamps continues to , at first sight, present a design with horizontal ligned background , and others clearly a squared background ( a net of perpendicular lines...) ; you can see this difference watching the 8k and 15k stamps.. could this be an important difference...?? I don't know..