The stamps I have to enter the collection today , are from a small lot I have since last November..They were not bought , but given to me by someone from my family who went to Turkey for a few days.. Everybody that I know that goes to a foreign country, receives always my ' OK! bring me some old stamps...'... so she did , and by the end of November, in one of the weekly Family lunches, I received a small stockcard with no more than 50 stamps... The interesting thing is that the stamps were not Turkish but from Lebanon...
It is a pretty good lot , because it is very representative of Lebanon stamps and their evolution, with stamps of the main series,from the 20's to the 60's...I was very happy , because I didn't had any stamp from Lebanon...
some previous comments are needed before I began to show the stamps... The first stamps from Lebanon are like those of Morocco , Algeria and Tunisia, from French Origin ( stamps issued in France with Local Overprints or issued with different Country labels...)... following these French stamps, we have some others with the Label "Grand Liban"... Then appeared the label "Republique Libanaise" and finally "Liban".. Lebanon was occupied by French Forces after the WWI and achieved independence in 1942..
Let us now show the stamps...

These are stamps from a series from 1925, and curiously from the only series with Label "Grand Liban" and non Overprinted or surcharged stamps..like in the case of Morocco and Algeria , these are stamps designed by Joseph De La Neziere.. As with many other French Stamp Designers , the work of De La Neziere is very diverse and focused in many different countries, specially France former Colonies...He was the subject of one of my first posts in my other blog, and I have updated it several times , because even with many catalogs and diverse data ,there are always countries that I didn't think off... I need to updated it again..! the motifs shown are : 1) Crusader Castle , Tripoli 2)Temple of Jupiter, Baalbek 3)View of Zahle
1925 "Views from Lebanon 1925" (13) [Des (Joseph De La Neziere)][Photo (Helio Vaugirard , Paris)] Sc(52,54,57) 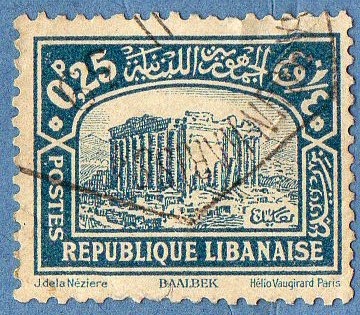 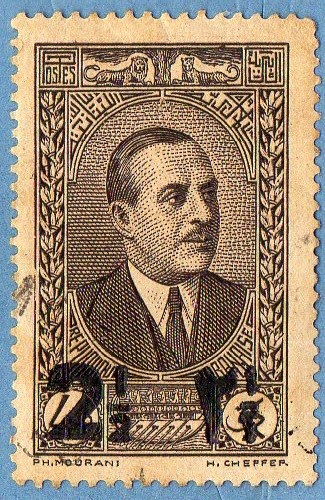 This is a Great Stamp!!..definitely the Great highlight of this post.. the paper, the design and the engraving are perfectly combined to result in a Great stamp...! Representing President Emile Eddé , the stamp is designed by Philipe Mourani and engraved by the Master Henry Cheffer ..Cheffer don't need an introduction, it's one of the Best designers and engraver's and that's it..!! Philipe Mourani was a French painter, who traveled through the Orient ,North Africa and Meddle East , becoming an Orientalist , learning Arab language and writing ,and rapidly acquiring a great level of expertise....he designed several stamps for Lebanon, that turn out to be his home base to his endless travels...It is curious that Joseph De La Neziere had a similar life path..
The stamp originally belong to a series from 1937 and was Surcharged in the same Year with 2P or 2.50P...
1) 1937 "Surcharge over 'President  Emile Eddé' 1937" (3) [Des (Philipe Mourani)][Engr (Henry Cheffer)][Recess] Sc(146) 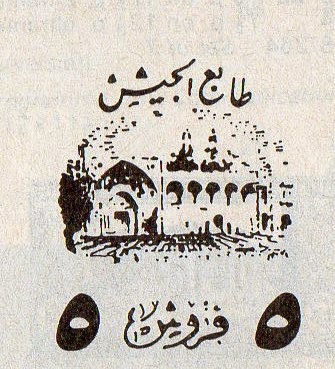 This is a Postal Tax stamp , issued whenever the necessity of acquiring funds for a cause or Social need ,these stamps were issued from 1945 to 1962 , with different goals...
this is a stamp from 1945 and this time it behaves like a War stamp ; it is surcharged with a beautiful Violet Surcharge, but in this case it is not clearly visible, it is somehow 'blurred'...I leave here an image of the surcharge because I think it is one of the most beautiful I ever found..
the stamp itself represents once again the "Cedar of Lebanon" and is surrounded by Beautiful Arabic motifs..
1945 "War Stamp" (1) [Litho] Sc(RA1)

These are Earthquake Stamps... issued to raise funds for the Prevention and Payment of damages from severe Earthquakes...
[Left] stamp from 1959.. there are two varieties of this stamp.. A) with the Arabic Labels at top B) Arabic Labels at the bottom of the stamp..the stamp presented is from type B...
1959 "Earthquake Stamps" (6) [Des (D. Akiskalian)][Litho (Imprimerie J. Saikali)] Sc(RA14)
[Right] 1956 "Earthquake stamps" (1) [Des (Paul Koroleff)][Litho (Imprimerie J. Saikali)] Sc(RA11)