King Victor Emmanuel III was born in 1869 and died in 1947..He had a long Reign (1900/1946) , and during all that time many things Happened.. Two world Wars, The rise and Fall of Mussolini's Fascism, The invasion of Ethiopia and Albania, etc...We could say that the series we will focus today was the 2nd series of designs with the King's Portrait...

I present here 3 stamps from this individual series (just with one stamp) , just to show that there could be some differences in the shades of the background sky and sea colors..
In the classification of this design, we must have caution, because there will be another two, very similar, a redrawn issued in 1909/1916 (Typo) and a 2nd redrawn in 1911 (also a Recess Printing) and we will need to find major differences between them... The first thing we must analyse when he have several of these two similar Recess stamps is the perforation... this first and Original issue has Perf. 12..(it is a distinctive fact...only the 1906 issue has this perforation..).. these stamps could appear printed in thick or thin paper..

at the [Left] we have a picture focused on the Uniform's Collar of 1906 .. we can see that in it's right side (closer to the viewer...) it presents us a Star and in the other side something other than a star..
At the [Right] we can see the 1911 Uniform's Collar with two stars , one in each side of it.. 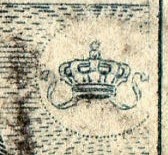 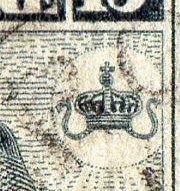 At a first look , the crown seems identical in both issues, but in  a closer view we can start detecting differences..the 1906  Crown presents a very well defined and beautiful cross above the Crown; the Crown's design is much more detailed and perfect...the design in it's general is different in both cases..

At the [Left] again, I want to highlight the number of lines that we can see departing from the back-most  part at the top of the white shirt...if we count the lines upwards we see 6 visible and well defined lines until we reach the ear..

This typo issue have a very distinctive mark , and it is related with the Sun and the Crown... in this case , The sun touches the Superior frame, and in the other two cases , as you can see above, there is always a space between the sun and the frame...The Crown is also different from the other two, very similar to the 1906 issue but without the beautiful Cross in the top ( it has just a small cross, like in the 1911 issue..).. The Perforation is 13.5 or 14 ; the design is slightly smaller than the original (23mm instead of 25mm)

These are some of the 1911 stamps , with background sky and sea with different shades and luminosity... Perforation could be 13.5 or 14 [ the design has 24mm instead of 25mm of the original]

With this series , we return to a more classic approach , with the stamp again divided into Portrait and Frame ( a very classical one..).. These are both designs of Alberto Repettati, one of the major Italian Engravers...I am talking here of 2 designs because as You can see the 5c and 15c have one design and the 10c another one, differing in several points of the frame.. I have to say that the 5 and 10c were issued in 1906 and the 15c in 1919..

you can see by these pictures, that the frames differ in the upper corners, in the space connecting the two labeled interior frames, and in the Currency label, with the 10c closer to the exterior frame line

Here are some of the color varieties in the 5c and 10c stamps.. in the 5c , we clearly see the light Green, the yellow green , the blue Green( a dull blue green..)  and the Normal Green and perhaps some intermediate colors.. in the 10c , we can see the claret, the rose, perhaps a red rose, and others.. I had more stamps to present but I only choose the more representative of something near a color variety...

The difference between these two designs is documented in the 2 pictures above..  The upper frame of the stamp has colored solid background and letters in white, or the upper frame has solid white background with letters of the color of the stamp...There are some stamps missing , but I also have some color variations..

Well, it is the end of this post...I've got nothing more to tell about these stamps.. sorry if there is any imprecision ... please comment if  You want.. Comments are always welcome..!