Last night I was ending the classification of the stamps for this post when i come about a group of 12 King Ferdinand I 1920/1927 stamps..all the stamps from this post are from the last lot i bought sometime ago.. a very good and large lot, with many more to present...the problem is I remembered that I have some other stamps of this large group of series to classify.. and so, I begin searching for them and I found one entire Album page filled with stamps of these series...The idea of making a post about King Ferdinand's Series immediately cross my mind , so I had to replace those 12 stamps in today's post... No time , I had no time to do that...so today I have a small post and a new one in the future ,about King Ferdinand, is promised , .. 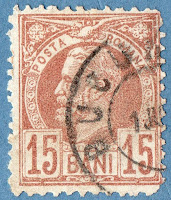 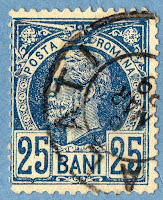 two stamps representing King Carol I... they are from the series of 1885/1889.. this series was issued with 3 different perforations (11.5,13.5 or combinations of these two...) ,the possibility of having or not  a Beautiful coat of Arms as Watermark ( I must say that the Watermarked series, has also the 3 different perforations...)and 3 different papers (tinted paper, white paper, pale yellow paper) ... the stamp to the [Left] , with a very peculiar color (SG tell us that 3 shades are possible, Pale Red Brown, Red Brown , Red Brown on Buff) has a 11.5 perf ,no Wmk and white paper ...[Right] this stamp has 13.5 perf and Pale yellow paper...this time the catalog present 6 different shades (pale blue, ultramarine blue, blue, Deep blue on Yellow, pale blue on Yellow  and indigo blue on Yellow..) .. as you know colors are for me a very difficult subject, but i think this is the Indigo blue on Yellow (I am not certain of the presence of the Watermark.. I can not see it without instruments or Watermark detectors.. I will leave this stamp open for future appreciation..)
1885/1889 "King Carol I" (19) [Typo (Government Printing works, Bucharest)] Sc(78,93?)

small group of King Carol i stamps..only the 40b is a new entry to the collection, and the others are just  to add originals already presented.. something i noticed when i was taking the scans, is that in the 10b stamp there seems to be a light displacement of the Center image of the king , downward into the rest of the vignette...I saw the other 10b stamp I have already and the same thing happens, so perhaps this is a normal thing and not a "case of study".. but  when i saw the 4 1b stamps I have, I detected that in one of them this event also occurs and i became a little more confused...
1906 "25th Anniversary of the Kingdom" (10) [Des (Ludovi Bassarab)][Recess (Bradbury Wilkinson & Co.)] Sc(189,186,192) 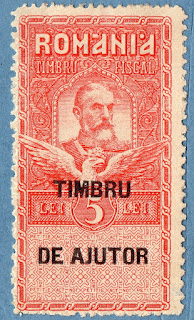 A very beautiful Fiscal stamp, but I know nothing about it... after a first look i can say it is a [Recess] printed stamp, with the picture of king Carol I in the end of his reign and that the stamp was overprinted with "Timbru de Ajutor"(Help Stamps) ...the last two facts together are building a doubt in my mind...We know that king Carol I reign begins in 1881 and end's in 1914... we also know that it was usual, not  only in Romania, to have the picture of the king in the stamp.. (there could be more than one king in the stamp, but the one that is actually reigning must be there in the picture) so we can conclude that Carol I was still the king of Romania... if we look to the catalogs and to the overprint "Timbru de Ajutor" we can see that the first time it was used was over  the stamps of the King Carol I 1908 series in 1915... the king's picture in this stamp is posterior to the one of 1908 and similar to the picture of King Carol I in 1913 ("Acquisition of Southern Dobrudja" 1913 series, 15b stamp).. so the fiscal stamp should be from 1913, 1914 , later overprinted with "Timbru de Ajutor" from 1915 on ... [ The Universe is a strange thing , always surprising us , and never, never unveiling what is ahead of us... I was writing this when i though that would be better to make a last Net search about "Timbru De ajutor" .. and there it was .. the overprint is from 1916 over a Revenue stamp of 1911... I could delete all that I have written before, but i will  let it stay , because it was my only thought current at the time ] ...OK.. it is a Beautiful stamp!!

All the stamps I will present until the end of the post are from 1940/1941... first we need to center our attention in the social Background of that time and mainly in the characteristic individuality of King Carol II ... As a Prince , Carol II had a life full of Romantic affairs and scandals.. as a result of one of them , Carol II abdicated to his right's to the Romania Throne for his son Michael I in 1925... Carol II returned to the Country in 1930 , overtaking the Power of his son Michel I (Michael I never again saw his father or talked with him..)... In the next ten years his personality and image was massively imposed to the kingdom and in 1938 the "Sentinels of the Motherland" was created as a Dictatorial Youth Movement (like others in Germany,and Portugal for example..) , and the king  has taken Full Dictatorial power over the country...in terms of Philately , we can say that many series were issued with the image of the King, a Fund for his Youth was created and his accession to the Crown was commemorated with new stamps every year...so , it is not surprising that from these days many Carol II series were born and some of them became marks of Romania Philately...

A series with Carol II wearing the Air force Uniform...for me it is a good series , with good overall aspect, but I continue to say that there is nothing better than an Engraved stamp... this [Photo] printed stamps always seem to me poor than they could be...another thing I want to highlight is that when you use a scanner, do not use resolutions above 400ppp with these [Photo] printed stamps, because of their lack of  detail and general blurriness  .. the final result can be very bad...with [Recess] printed stamps you can use very high resolutions...This is the first of 3 series commemorating the 10th anniversary of the kings Accession...
1940 "10th Anniversary of Carol's II Accession to the Thrown/ Aviation Fund" (8) [Photo] Sc(B119,...,B126)

In this series Carol II appear as a man , as the ruler of the Romanian Army and as Military.. it is a wonderful thing for us collectors, to read someone's biography and to understand what was happening in that person's mind .. it is easy to see that this was a dictatorial regime mostly publicized with an emphases in the image, like in other of  such regime's (Hitler and Franco  , for example , used also the image in a powerful way, not only his own image but also all the symbols of the Ideology and the Regime-in Hitler's case-...) .. Strangely, we find in the same time frame other dictators who don't used their own image as a weapon of mass publicity..Salazar and Mussolini were two good examples of this fact..
1940 "10th Anniversary of Carol's II Accession to the Thrown" (6) [Photo] Sc(B113,...,B118)

This is the third 1940 series commemorating the accession to the throne , and this time it was a series dedicated to the new youth movement 'Straja Tarii' Fund..the creation of these movements with high military Ideology in it's source it is common to almost all XX Century Dictatorial regime's .. in the Portuguese example it was accompanied by though and strict rules of Education with emphasis's in the "God, Nation, Family" Ideology...
1940 "10th Anniversary of Carol's II Accession to the Thrown (Straja Tarii Fund)" (8) [Photo] Sc(B127,...,B134)

In 1940 Carol II was overthrown by the Pró German and Anti Bolshevist Government of  Prime minister Ion Antonescu who returned the ruling Power to Michael I, who again became King in September 1940..but those were difficult times to King Michael I who act only as the Official Power , but the Power was effectively in the Hands of the Prime Minister...the Constitution was suspended and the Parliament was dissolved..
This series of stamps show us quite clearly this Difficult times with both the Nazi and Anti Bolshevist Ideologies well present...
It is interesting to see that some Kings and Queens of the XX Century lived almost  "Fairy tale" life's while others do not succeed with their "Nightmare" Life's ..  The Universe is indeed a Strange thing.!..
1941 "Anti-Bolshevik Crusade" (4) [Photo] Sc(B170,...,B173)

well, it's the end of this small post with many words...

[Update] All the stamps from 1940 and 1941 that i have presented show a small sign on the DownRifght Corner..
I leave here two images of this small sign.. Could be the sign of "Fabrica de Timbre" ... I don't know.. 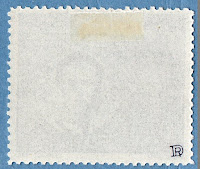 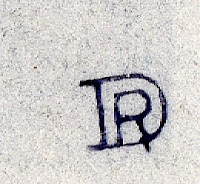