I would like to talk a little about some experience I am gaining with time with the research I am continuously doing for my other blog...stamp designers could be sometimes very furtive and could live lives as unknown people... other times ,they were great Artists that one day have designed some stamps, just to gain some money... The real problem came when they are great Professionals, with sometimes hundreds of stamps designed, and there is almost nothing about them, no biographical data... this happens frequently with designers of many countries from South America, Africa and some countries of the Middle East ... there is much to do , many information about Artists in general , not only designers ,  must be made available by State Organizations or by the unknown citizen , and in this field I think many research has to be done by Philatelists of those countries...And Now You should be asking "But 'Who the Hell he think he is??' ; Well, I'm just a person who need that info and can't get it, because it isn't where it should be ...  We have to Globalize a little more... and Globalization must not be an empty word used by Politicians to ornament their speeches... Globalize is to offer, made available info, even when it is not requested.. The main tool , in our days  to Globalize is the computer and in my opinion the Language to use , should be the English..

Today I will present some stamps from Belgium , some difficult stamps to present , because there isn't much to say or talk about them...I will not follow the usual chronological approach , and i will start by the 50's and 60's and with a series first issued in 1957  that I think continues today.. The "Stamp Day" series is common among many countries and is used sometimes for disclosure of cultural events or interesting aspects of the Postal Activity through time...I have several of these stamps , and I decided to show them today...they are beautiful works of design and in most cases also engraving... Let us start in 1957..

the stamp show us Emperor Charles V and Jean Baptiste de Taxis (Grand Master of the Posts) , who is giving a letter to the Emperor.. This is a solo work of one of the Great Masters of engraving.. Jean De Bast. it is without doubts a beautiful stamp, and at this time we should notice that his signature (JD) is presented in the stamp
1959 "Stamp Day" (1) [Des (Jean De Bast)][Engr (Jean De Bast)][Recess] Sc(530)

The stamp show us a XVI Century Post man riding a horse .. this was the first of three stamps of the series "Stamp Day" , designed by James Thiriar and engraved by Jean De Bast.. notice that in this stamp there were no signatures..Another detail we should highlight is the fact that the Background is [Photo] printed and the main design [Recess] Printed..

This is a XIX Century Stagecoach , and the two processes of Printing are merged together again... Jean De Bast signature is again presented (small letters JD at the Downright).. I don't know what was the criterion for him to sign his stamps, but the fact is that some of them are signed and others don't..
1963 "Stamp Day" (1) [Des (E. Verboeckhoven)][Engr (Jean De Bast)][Recess][Photo] Sc(591)

these are two spectacular works from the partnership James Thiriar/Jean De Bast... To choose James Thiriar (1889/1965)  to do the design of these two works was obvious, because he was best known for his ability to design Military Uniforms.. During the WWI he worked as a designer in the War Front , for both Belgium and British Magazines..
[Left] in this stamp we find a Liege Postilion from the XIX Century.. A postilion was a Stagecoach driver who, instead of be seated  in the coach itself , was riding one of the Horses that pull's the coach... these workers do not use military uniforms but the Postal Office had a Uniform for them...
1964 "Stamp Day" (1) [Des (James Thiriar)][Engr (Jean De Bast)][Recess] Sc(609)
[Right] A Postmaster of the XIX Century is represented with his more distinguish look...
1965 "Stamp Day" (1) [Des (James Thiriar)][Engr (Jean De Bast)][Recess] Sc(629)
both the works are excellent , great engravings and have the particularity of being both signed by the two Artists in very visible places, as it to say "This Was a good work.. I like it!"..this partnership was for sure to continue with some more beautiful works but was interrupted by the death of James Thiriar in 1965..

Two more works of De Bast for this series [Left] the stamp represents a rural Mail Man from the XIX Century... it is not a particularly good stamp , and we must not be surprised for the absence of signature from De Bast...the [Photo/Recess] Printing returns...
1966 "Stamp Day" (1) [Des (O. Bonnevalle)][Engr (Jean De Bast)][Recess/Photo] Sc(664)
[Right] At the right we have a Mail Horseman warning the population of it's presence with the famous Horn, presented in so many stamps...You can see the De Bast signature below the horseman's boot , in the ground...
1967 "Stamp Day" (1) [Des (O. Bonnevalle after the work of an Unknown engraver)][Engr (Jean De Bast)][Recess/Photo] Sc(686) 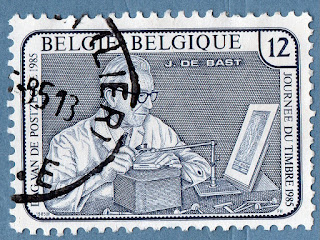 Now I will start a new section about Parcel and Railway stamps... As we know Belgium has a rich history with this kind of stamps.. I have made a first approach to railway stamps in other previous post and i will continue now, but other future posts will be needed to have a more complete look to the several series of these stamps...

This next series is from 1949 and the stamps represent the evolution of the locomotives through the XIX and XX Century... in order to satisfy the many 'Train Stamps' Collectors, I will present the stamps individually..

there are some values missing: I have the 3F stamp, but it is heavily damaged , so i decided to do not present it..the 300F is missing and the last stamp (60F) is from another issue.. two stamps of the 4F and 30F were presented because they are different shades of the main colors...We should pay some attention to the stamp frames ; they are very beautiful and well designed..the engraving troubles me... it is very good , but  the presence of a Pure white Background should prevent and disable the appearance of white spaces also in the design of the locomotives .. I don't understand it.. in some of the designs , the engraving leaves white spaces where they shouldn't exist.. ( you can see this in the 9F,20F,40F stamps, for example...)

As You can see in this 40F stamp, we have something that appears to be a sun reflex, but the ending result is identical to the white Background.. it should not be this way... 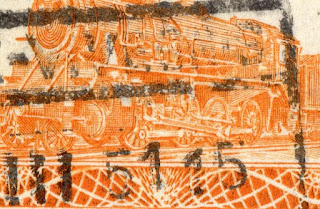 in this 20F stamp, all those metal pieces should not be plain and pure white...

the same happens here in this 9F stamp, with to much empty white space...

in the same 9F stamp we have a complete Printing failure...
The question is.. Are all of these white spaces some kind of bad work of the engravers?? Was the Background originally intended to be White?? are they simple printing failures??

Well, we reach the end of this already long post...Hope you like it..!