Hello, again... taking advantage of the fact that some of the stamps I have to show today are from Great Britain, I wish to talk a little about the Anglo Saxon culture that is dominant today ..in the end of the 19 Century we still had several languages struggling themselves to reach domination... we add a larger french influence, German , Spanish, Portuguese , English of course, Italian  and others... with the end of WWII , peace was achieved in Europe and the US take a predominant role in International Politics and Commerce with it's Culture being largely broadcast by Cinema , radio and Television.. of course the English language , rapidly dominated all the others, and with Bill Gates computers in the 80's, there was nothing else we can do about it...!! Why can't we just accept the fact ??? don't we need a common language?? Why is the English so bad? for example , it is much easier to learn than my Natal Portuguese or the French..! with my experience in the NET, I found that there are people who still resist ,  always writing and commenting in their languages... with all the respect those people deserve me , to read their blogs or posts , I need to use the Net translators, and it is not the same thing , we all know that..!!! never mind the mistakes You made when You are writing in English, never mind the construction of the phrases, please try it !! We have to catch this ' Train ' !! it is already in movement !! if We don't catch it now we will have to begin searching again for dominance, and worst , we will have to wait for the next train to arrive.!! By accepting English as your current way of communicate with others in the Net, You are not accepting nothing more than that..! You are not accepting Political views or Religious Views.. You are accepting a Fact!!! a fact that will be in the future very difficult to find again...
Let us now return to the stamps ...
I have some KGVI Great Britain Commemorative stamps, a few stamps from Dominica and Colombia Air Mail stamps...

There are nine commemorative series from King George VI... I have some of them  complete and others with stamps missing... I want to again highlight the obvious fact  that I am a World collector, so by principle I don't mind to much with the general overall aspect of my stamps.. sometimes it is not the desirable , but I cannot have all my stamps in optimal conditions.. that would be unrealistic for me , because there are many, many stamps to collect, beautiful or ugly, expensive or cheap and my finances are not the best part of me..! all the stamps are very common, and almost all of the series have some varieties, and it is a strange fact that those varieties are only accessible for someone who has a Specialized catalog.. ( they are not important varieties, if we speak in it's monetary value, but they should be more of the 'public domain' ..) 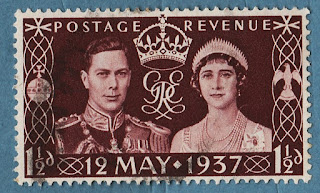 this stamp is related to the Coronation of King George VI... it is a single stamp series , but it has many possible varieties...I have 5 similar stamps and I didn't find any of the varieties, so I will not talk more about it.. the stamp is designed by Edmund Dulac... I like to write a few words about Edmund Dulac.. being a French born Citizen , but British Naturalized , he was very important to France and to Great Britain with his stamp designs... during WWII he designed many stamps for the French colonies and even for France (remember the Dulac's Marianne..) but he designed also very important stamps during the reign of KGVI for Great Britain...He was a very interesting link between the UK and France...
1937 "Coronation of King George VI" (1) [Des (Edmund Dulac)][Photo (Harrison & Sons)] Sc(234) 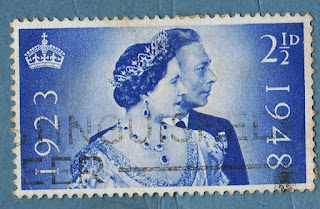 This is a series issued mainly for use in the channel Islands, so it should be considered a Regional Issue... however the stamps were sold in Great Britain , in some of the Head posts of the Royal Mail.. the series commemorates the liberation of the channel Islands..
1948 "Channel Islands Liberation" (2) [Des (J.R.R. Stobie 1d)(E. Blampied 2.5d)][Photo (Harrison & Sons)] Sc(269,270)

between the Olympic Games series and this one, another one commemorating the 75th Anniversary of the UPU was issued...I just got one of those stamps  (series of 4) so I don't present it... this series is the last commemorating series of King George VI reign..
1951 "Festival of Britain" (2) [Des (Edmund Dulac 2.5d)(Abram Games 4d)][Photo (Harrison & Sons)] Sc(290,291)

it is not new that some Territories of the Great Empires of those days were in remote zones of the planet or just  one or few from larger groups of islands... so, the fact that I needed to know something more about the location of this Territory from the British empire is , in the end , not a surprise... well, Dominica is the largest of the Windward Islands , southeast of Puerto Rico...
the few stamps I have are from one of the 3 series sharing an original design of 1874 from Queen Victoria (I'm not counting with overprinted or surcharged series...)

another fact that I should not consider strange is that the name of the designer is unknown... many of the Designs with Queen Victoria Portrait s have unknown designers , because the designer was considered to be part of the printing Company or just because in those days this detail simply didn't matter.. this particular stamp is very beautiful and the engraving and printing is good, highly detailed .. we can see this fact by the Queen's Tiara and hair..
this time the used stamps have more value than the Mint or unused one's...
The first two stamps were issued in 1883 , the next 3 in 1886 and the last one in 1887..
1883/1888 "Queen Victoria" (9) [Typo (De La Rue)] Sc(16,17,19a)

before starting this presentation of some Air Mail Colombian stamps I have to talk about the SCADTA stamps... the task of transporting mail by Air in Colombia was granted to "Sociedad Colombo-Alemana de Transportes Aéreos".. after sometime working , the company started to have problems due to the large difference of mail arriving and departing Colombia... the quantity of mail arriving to Colombia was considerably larger than the mail that left the country..the SCADTA stamps (the most part designed and printed in Germany) became available in the consular offices of Colombia in foreign countries... so If you want to send mail to Colombia and have a better service , you only needed  to buy those stamps (previously overprinted with the initials of the Country of origin..) in the Colombian Consul Office and glue them in Your letter...the problem is that the system was not perfect and suffered several changes during the years.. this is the main reason of the importance , not only philatelic  , but also monetary of the covers from this period of time that sometimes present a great mix of foreign and SCADTA stamps, turning them in real objects of study for specialized collectors... each period of time had different SCADTA rules .. I left here a site where you can see some of the complexity of all this system and the beauty of the covers...  I also could tell you that Stanley Gibbons has a good section dedicated to these stamps in the  "South America" catalog...
I don't want to enter in further details because i'm not  a collector of these stamps in particular... the stamps I have to present are stamps that were available in Colombia, without overprints.. 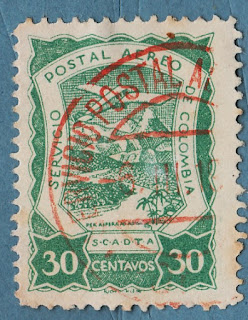 Both this series have 2 different designs...i present now the 10c,20c,30c,60c,1P and 2P...there are some spair stamps , just to see that various shades exist from each color...what troubles me it is the last stamp of the 30c I present... it is clearly one shade of Green , but the color should be blue... I think that it is too Green to be blue, but it is not from the 1st series because it has wmk and perf 14x14.5...strange..
This 2nd series has a label "Servicio De Transportes Aéreos En Colombia"
There is another great difference between the stamps of the 1st  and 2nd series...
2nd Series ) vertical design) floats in the wings of the aircraft.. Horizontal Design) small chapel in the left peak instead of the right peak in the first...
1923/1928 "Servicio de Transportes Aéreos en Colombia" (13) [Des (R. Klein)][Litho (Government Printing Works, Berlin)] Sc(C39,C41,C42,C45,C47,C48)


I hope that you have found this post interesting ... for me , it is satisfying if you begin to see some movies in English with English Subtitles...