Today I have some more Chinese stamps from the 1900's and 50's and to finish the post , a complete Year of stamps also from China...

A very famous complete series from 1951... the National Emblem Issue has just one design , but a particularity....the stamps are [Litho] and [Recess] printed...there is a [Litho] printed Yellow background with crossed lines and the vignette and labels are engraved...
1951 "National Emblem Issue" (5) [Des (Sun Chuanzhe)][Litho][Recess] Sc(117,...,121) 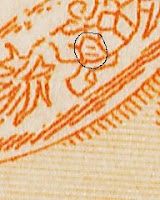 this series is incomplete and has 2 designs... reprints are known in this series,so to distinguish them from the original stamps,there is a mark in each one of the designs...all the stamps presented are reprints,because : 1) in the first design, You can see a small line of shading (deep ) in the left top corner...2) in the 2nd design ,next to the dragon's tail , in the lower right of the coin , there are two small lines inside one of the dragon's scales...
1951 "Centenary of the Taiping Revolution" (4) [Des (Sun Chuanzhe)][Recess] Sc(124,125,126) 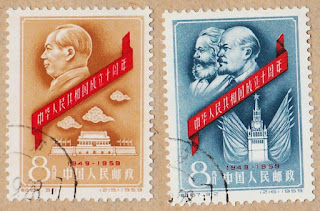 Some years ago I bought several series from China 1988 to a Portuguese seller... some time latter , he contacted me and asked me if I was interested in buying complete Years from China ... I said yes and for almost a year I bought him 11 complete years , from 1993 to 2004...it was a very nice price,good Chinese Albums, with MS, SS and all the material that was issued in each year (except FDC's , of course..).. suddenly , he never contacted me again, and doesn't answered anymore to my emails... since then , I tried to ask Chinese people living in Portugal if they could arrange me some stamps, but the answer was always no , sometimes with very rude manners... I was not asking for stamps from 1967,I was just asking for those cheap and common stamps from the last decade.!! here are some photos taken with my Jurassic Phone , where you can see the album and some pages... 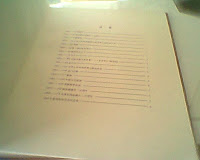 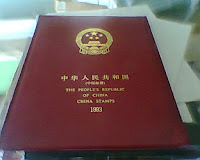 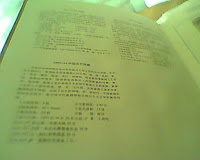 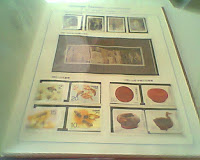 The first year I will present is 1993... Unfortunately, in my opinion it is a "not so good" crop...most of the stamps are [Photo] printed, there isn't any stamp that we could say "Yes, it is a above average stamp.."... the series themselves are not appealing, neither the subject neither the stamps...Knowing as I do know the following years I could say that this is the weakest of the 11 years I've bought... so , let us see them..!. 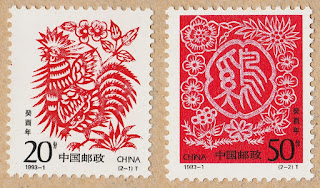 Commemoration of the life of Song Qing-Ling... but who was Song Qing Ling?? after a quick research in the Net, I found out that she was the 2nd wife of the 1st Chinese President , the Very well known Sun Yat-Sen (perhaps one of the most represented personalities in stamp designing... just remember the countless huge series with his portrait , before the implantation of PRC...)
1993 "Birth Centenary of Song Qing-Ling" (2) [Des (Yan Shuntai)][Photo] Sc(2431,2432) 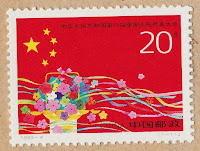 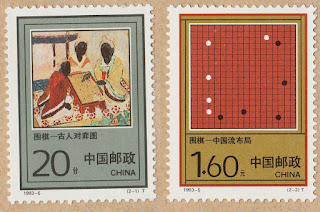 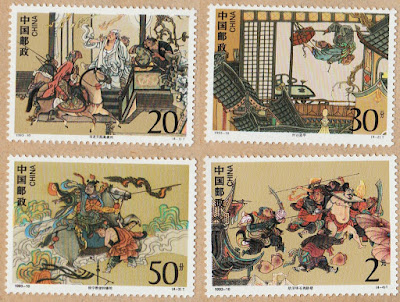 This is a Literature series, where the designs tell us part of the story...this is actually a Group of series , 4 stamps for year about the book "Outlaws of the Marsh" and this is the 4th Series...now that I'm classifying these stamps I remembered something from my youth and at the same time another one of these Chinese Literature Group of Series.. i'm talking of "The Romance of the three Kingdoms" ...I have this Group completed, but what I want to talk You about is that a Japanese  Company called Koei made some amazing strategy games about these work of Literature, and the last update of these programs came out just a few years ago... but the Game I played was the 1st and 2nd of these games, back in the 90's... before these , I played endlessly another game from Koei called "Bandit Kings of Ancient China" for PC.. I played it for an year or two, and I won all the levels with all the heroes possible, and several times... it is a fantastic Strategy game and it was from the end of the 80's, beginning of the 90's , and the game came in a 1.2Mb disc!!! it was amazing the complexity of the Battle boards, how the computer reacts with remarkable intelligence (it actually grows with the wisdom of the Hero the computer is playing with..) , and all in 1.2Mb.. it is a game I personally recommend  if you( or your juvenile son... ) want to have a nice challenge...(it only plays in MS-DOS..) [The version shown in the linked video is not for PC.. In a PC the graphics were similar but better and the battle boards were different but with the same complex rules, where everything counts..)...]
Ah, I'm back to the stamps...
1993 "Literature / Outlaws of the Marsh (4th Series)" (4) [Des (Zhou Feng)][Photo] Sc(2449,...,2452) 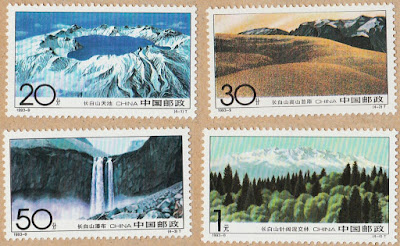 this is what we could call a Geographic or Geologic Series..it is about the Changbai Mountains.... it is interesting to notice that in a first and distant view the pictures seem like photos, but they are not ...in fact the designs are quite good but the Printing....(!) ..
1993 "Changbai Mountains" (4) [Huang Huaqiang)][Photo] Sc(2453,...,2456) 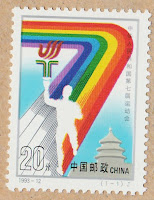 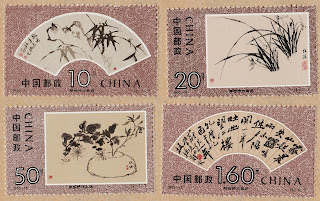 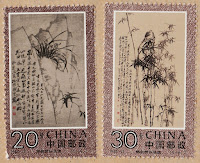 between the last series and this one ,there is  a series about Lacquer Work that I don't present because it was already a part of the collection...

The series is about the work of the Artist Zheng Banqiao , but besides his beautiful work ,what I find very interesting is the stamps background.. it was very imaginative to use something like a 'potato sack' texture, and above it the vignette and labels.. very nice...
1993 "  300th Birth Anniversary of Zheng Banqiao (Artist)" (6) [Des (Pan Keming)(Lu Tianjiao)][Litho] Sc(2471,...,2476) 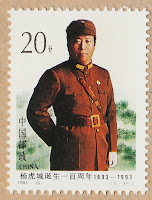 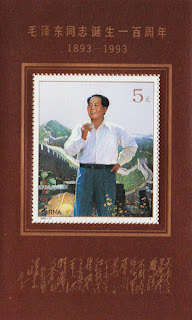 To finish this review of the 1993 China Stamp Book,here it is a series about Mao Zedong .. I was expecting that this series could be printed using another more refined process,but in the end it was the same [photo] printed material...
1993 " Birth Centenary of Mao ZeDong" (2+MS) [Des (Wei Chuyu)(Peng Bin MS)][Photo] Sc(2478,2479)

Well, it is the end of this post where I tried to turn this last part more interesting with links to biographies and videos,and I think in the end the post turns to be an interesting one...alright....