As I promised in the end of the last post, here we have some "oldies" from Luxembourg...I have these stamps for some time, but because they are very famous stamps and due to the fact that I already have some of them in the collection, I  choose to show in previous posts other stamps that in my opinion are less known...but this is the time to show them and I'm going to start in 1891 with the stamps from the Grand Duke Adolf ....

(2)
The Grand Duke William III died without male heirs, so the Duke of Nassau become Grand Duke of Luxembourg in 1890 , ruling as Grand Duke Adolf. the design of these stamps was made by Michel Engels, a notorious Luxembourg painter and  Illustrator... The complete set has 10 stamps and I've got 7 of them .. the only new stamp in the collection is the 12.5c... I'll keep the other 4 because this series has a lot of differences in the colors with numerous different shades... for example , I will show some of the others (old scans with less detail...) [P2]
In this series we could find 3 different perforations (12.5, 11, 11.5 x 11) and I remember the existence of a parallel series overprinted (OFFICIEL) , a common fact to many of the future issues of the 20's and 30's...

Some stamps of other series representing Grand Duke Adolf ,but now in a right profile...the series has 5 stamps and exist also in the Overprinted OFFICIEL form... I choose to present two stamps of 2c , just to highlight again the existence of many shade variations...(the 2nd 2c stamp is obviously still "on paper" and need a treatment before being stocked... I  present also stamps of the same values already in the collection (the complete series) to better see the shades subject (P4) 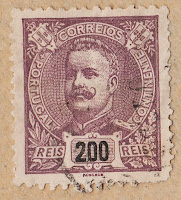 I remember that in a previous post and talking about the King Carlos I stamps from Portugal (P5) ,I said that Eugene Mouchon , the Designer and Engraver of the stamp picked the inspiration for the Central Background in the sidewalks of Lisbon beautifully made by stones side by side, sometimes performing beautiful and spectacular designs in black and white stones...well , I was not sure of nothing of this and nobody could be, but now things are getting somehow more clear....the series above representing Grand Duke Adolf (P3 and P4) was also Engraved by Mouchon, but , and here We have a problem , catalogs say that it was designed by Knopp.. the problem is that the same Central background exists..!! I raised again these thoughts , because the Portuguese series of King Carlos I was issued in Nov 1895 and the one of Luxembourg in May 1895...I'm not an expert in the King Carlos I series ,despite the fact  that I am Portuguese, but something I think we can conclude is that all the "Lisbon Sidewalk" idea should be just some kind of Nationalist feeling....but new questions were raised : 1) was really Knopp the designer of the Luxembourg series?? 2) or it was Mouchon himself?? 3) if Knopp was the designer, then Mouchon used his idea for the Portuguese Design, something that I think it is very unlikely , because a World collector of those days (and I think that there were many more than today...) would notice the resemblance between the two issues of the same year... It would be almost a scandal..!!! I will have to ask an expert opinion to someone in Luxembourg...
if you , the viewer, want to comment or to bring Your own opinion, please do... I will update this post with any thoughts or facts that could bring some clarity to these hazy situation...

These are stamps from the Grand Duke William IV that ruled from 1905 to 1912...it is a very nice stamp, with very good design of Pierre Blanc  and good engraving...I don't have many spare stamps from this series, but I think that diversity with color shades is also and again a point to have in mind...the series was issued in 1906 and has also an overprinted OFFICIEL series...

(7)
(P7) show us 13 from the 15 stamps of the original series of 1914 representing Grand Duchess Marie Adelaide... Her father, the Grand Duke William IV had no male heir , so Marie Adelaide was named Grand Duchess in 1912... However times were complicated and there were Dark Skies all over Europe announcing WWI... at the end of the war Marie Adelaide suffers the price of having opinions Pró Germany during the Invasion , and the pressure of the Parliament and People of Luxembourg , led her to resign to her Sister Charlotte in 1919... This is a beautiful and impressive stamp, one more Art work of  Koloman Moser , one of the Art Nouveau Masters...it is in fact a joint effort of two extraordinary Artists, that worked together for many years.. Moser and the engraver Ferdinand Schirnbock...(remember that the posts in my other blog only show stamps that effectively have been designed by the Artist, because in the case of Schirnbock, he had many other stamps where he worked only as Engraver...).

(9)
P8 and P9 show us the 18 stamps series representing Grand Duchess Charlotte's Portrait.. All the design and engraving was done by the Great French Artist Henry Cheffer  (You are now being redirected to a post of my other Blog about Henry Cheffer , but despite the fact that it isn't stated there , the post is still incomplete...).. This lot had also some stamps of the "OFFICIEL" Series, but I prefer to show them in another future post...I have to say now that Sc catalog present this series as having 18 stamps, but if you look to the SG catalog You will see that in fact we have 2 distinct series :  the original 1921/1922 series with 12 stamps(P8) and a "New Colors" series of 6 stamps issued from 1924 to 1926 (P9).. in the end the result is the same because Sc present us also different dates of issue for the 6 stamps of the SG 2nd series...This fact is most common because SG is a more detailed catalog than my Sc World that obviously represent a more relaxed and General approach...
Charlotte ruled over Luxembourg from 1919 to 1964 and received the Power from his older sister Marie Adelaide...

before ending this brief post , I like to show a small detail in the beautiful 25c Ultramarine blue stamp of the Grand Duchess Marie Adelaide series... it is a small detail that will have ,I'm sure, no significance , but there isn't any remark in my catalogs about it and I cannot pass along without mention it... 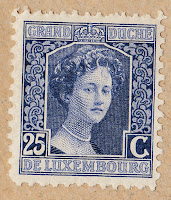 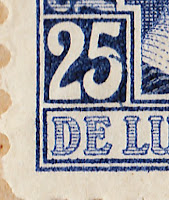 (P10) show us the stamp and (P11) the detail I was talking about... a small line of the surrounding blue was printed inside the white number five...I think that it is difficult to be a occasional printing "mistake", that only appear in a stamp or two, so in my opinion more advanced studies about this stamp should have references to this detail...

well it is done..