US stamps are the only delicacy in today's Menu... not a "Gourmet" one , more like a plate of beans and rice....Yes, the stamps that will enter the collection are very common, and almost everybody have them in their collection...some of them appear as replacements of others because these are in much better overall condition than the one's I had...however, the number of stamps in this post is greater then usual.. I have been preparing this post for two days, entering all the usual data , plus Designers and Engravers...

I will start the post with the Famous 1938 'Presidential Series'

I don't have much to tell about these stamps , they have the perforations in ' more or less' good condition and that's the only thing that bothers me , because I had some stamps from this series in very bad conditions... the postmarks are something I have to live with , I don't like them ( some of them , of course...) but I'm beginning to learn that in the US , some people collect these postmarks.. so be it..!

I like to start by saying that the last two stamps (1$,5$) presented in the picture are of course of the "Presidential Series" .. this is a beautiful and complex series , with portraits monuments and building's designs... it is somehow complex , because in order to achieve a correct classification of the stamps , We must know something about Wet and Dry Printing...this series appears in a time frame where the BEP (Bureau of Engraving and Printing), was ending a modernization process and starting to work with new machinery and to apply new concepts and ideas generated in recent years...so in this series the two process's still coexist and in the most part of the stamps we have the 'old process' and the 'new process' stamp...All of these transformations had also a great economical impact.. productivity was increased , the number of employees decrease and all of these factors contributed to an additional income to the producers..I don't want to prolong myself to much with this subject because there is plenty of information about it available in the Net; 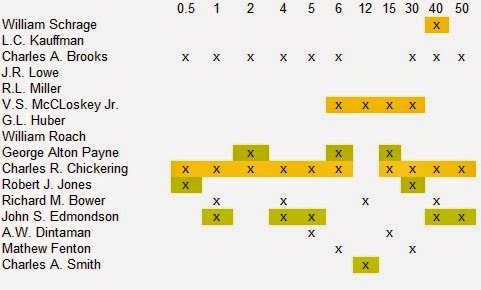 Sorry for another mistake... the $08 stamp is from the Liberty Series and shouldn't be here now... This is a small group of individual series, about Famous Americans...