In this post I like to share with you some 'oldies' from Russia...It is a group of stamps of the commonly called "Eagle and Crown" Series.. it is a vast and 'tricky' group of series, with lots of small differences in a picture that look's more or less the same with time...So, I have these stamps before me , and I am asking myself .. How do I start?? where do I start  ?? after some quick thoughts , I realized that I should start from highlighting  what is common to all of these series and dividing the stamp into some 'hot' points where all the action will take place... to begin I will describe the stamp in words and then present an image to clarify some points..
starting from the center of the stamp, we have a crowned double-headed eagle with it's wings wide open and in the left claw, the scepter and in the right one , the Globe...At the Heart of this strange animal there is something that remembers a coat of Arms (A small squared figure..it begins to 'sound' strange because the figure in it's totality meant to be a coat of arms..! ) ...At the Eagle's feet there are two post horns..At the corners of the stamp, there are numerals..between the oval figure and the frames of the stamp there is what I call the ' External Background' (because there is also a 'internal Background' inside the oval figure...)..of course we have to count also with the labels inside the oval frame and in the 'External Background' ... from the superior Oval Frame ,a beautiful Imperial Crown is born , so whatever is inside the Oval figure, is Crowned twice.!.Of course all of this is Heraldry Territory, with all the hidden significance's and other assorted mystery's.. 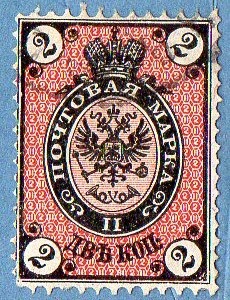 This will be a post not dedicated to show the final data of the stamps , but more to explain  some of my personal approach to these series...I've worked with a lot of stamps as you can see in the pictures below , but most of them I already had in the collection, so there is a relatively small number of new entries...I will keep many of them in the collection as stamps with small variations in color..

I would like to begin , by leaving here some important data about this large group of series..
1) The first stamps of the series appeared in 1857 and the last ones in 1917 , without counting with overprints and surcharges...
2) Until 1882 the values smaller then 10k used the Numeral Background(B)...after that , the Network of geometrical figures (C,D) was used..(I must clarify that for values superior or equal to 10k this Network was always in use since 1857)..I think that now is the time to say that I'm using mainly the Scott World Catalog , and crossing references with Stanley Gibbons and a Russian Catalog (1857/1960)[the problem for me is exactly that.. it is in Russian language...(it is much more detailed..)]

since 1866 to 1906 there is an additional important point that we must have in mind...
In the back of the stamps appeared some lines , clearly visible .. in the left we have Horizontal lines and in the right Vertical lines... 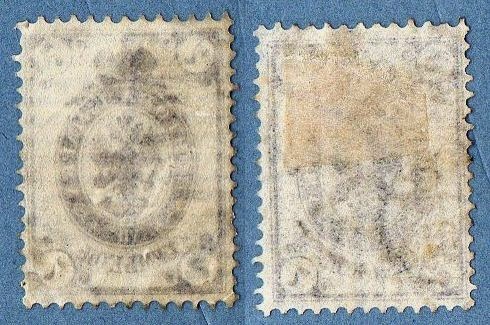 From 1899 to 1917 some additional lines in the form of small lightning bolts appear together with the image of the small horns below the Eagle..

I think that all our study could be systematized in a few lines:


In this long group of series , only two different Wmk are used.. The first , a numeric Wmk, is just used from 1857 to 1958 (in the first Russia stamps...)[You are lucky,if You see one of them..!!.] .. then , beginning in 1866 another Wmk with wavy lines and some Cyrillic Letters (initials of the Printing Company..)[coexistent with the HOR/VER lines]


Let us talk about the real new entries in this post (there are only five of them...)

I have here 5 F2 type's.. the first three of them are F2(A) and the others F2(C)..the first two stamps differ from the third because of the non existence of visible lines in the back of the stamp..; I'm going to quote Stanley Gibbons Catalog to explain the overall condition of stamp 1.. " between 1858 and 1883 some of these stamps were printed on a specially prepared paper coated with chalk as a precaution against fraud. The strength of the applied solution varies, being in some cases so thick that the printing ink did not penetrate to the paper, with the result that if immersed in water, the picture dissolves."  ; I think it was clearly what happened to this stamp.. it has no numerals visible , but it can only be a 10k stamp, and the perforation is 14.5 (no Wmk), so it is from the 1865 series (Sc 15a [the a is for thick paper..]).. same thought's about the 30k stamp ( Sc 18)..
The third stamp has Horizontal lines but it is a F2(A) stamp , so it only can be from the 1866/1870 series (no perforation study necessary , this time...) Sc(23)
The 4th stamp is Sc (61) [Vertical lines, F2(C) and Perf 14.5]..
The 5th is Sc(64) [same thinking..].

To end this already long post, I like to focus for brief moment in the 'External Background' A..I haven't talked yet about it , because it is not very common..I don't see any remark about it neither in Sc or SG.. but in the Russian Catalog a small remark is made about this background , that only appears in the 1866 series in the values of 3k and 5k [please see note in the end ]... 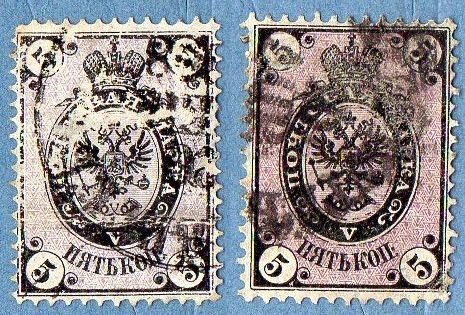 I've got another one of these 5k stamps already in the collection,with the background much more visible , but it is not a new entry , so....
I would like that one of my Russian Friends that casually read this post, could translate the part about the 5k stamp, for me .. It would be of great help..! the ink is also vanished from the 1st stamp , but it has perforation 14.5 and horizontal lines so it matches also the 1866 series..[Sc(22)] (of course, this stamps will also be added to the collection ...)

All of this is just my personal view of this group of series.. after studying the catalogs , You will reach your own way to properly classify your stamps...but they are difficult series and a systematized approach is highly recommendable, because without it you will be lost ...

I'm tired and just to end , I need to say that more designs are available in the 'lightning bolt' series, but I prefered to remain focused in these two main designs..., for now!!..