Some more stamps from Cuba... the 30's, 40's and 50's of Cuba's Society...It is a little hard to ignore Politics , when you are dealing with Cuban stamps.. Cuban always was, in my opinion, like a disinherited Son for US.. the proximity of the Island always led to business, contraband and other ways, legal or not, of prospering..The end of the war with Spain contributed to a bigger influence of US in Cuba , that as We all know ended in the 50's ..What really interest us , and Politics does not, is what the US left behind in Cuba's Philately, the influence in the design , the printing methods adopted, in a way  the influence of ABNC (American Bank Note Company)... I think that this influence was very positive, like in many other Central and South American Countries...
Let us start , chronologically , with a stamp from the 20's.... 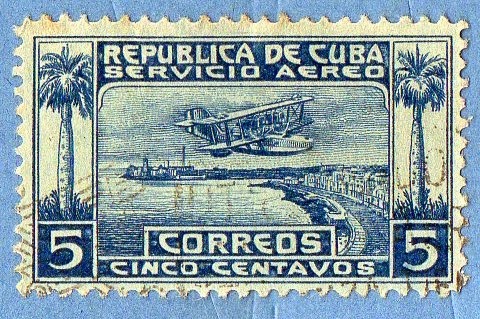 It is significant that I really don't have much data about designers in these period of time, neither in Cuba or other Central america Countries..the name of this designer of Cuban Origin , for sure , appears twice in the production of these early Air Mail stamps.. In many cases , I have info about the Printing Process , but the Designer is neglected.. I think that in these cases we have the 'dissolution' of the individual designer in the total work of the big company's like ABNC, Waterlow, etc..it was a wrong procedure , because it kept the Artist from receiving the credits for his work..
I left you here a very interesting small pdf article about the individual designers and engravers in the early days of ABNC..it is about Chile stamps , but it is a very good Article (in Spanish...)

These are stamps from the two Air Mail series of 1931..As you can see in a close inspection of the pictures I present , these stamps are fertile ground for color and Printing variations...
These series were issued from 1931 to 1948 (the 1st series - with the airplane heading right..) and 1956 (the 2nd series - with the airplane heading Left..).. so in these long periods of time printing methods evolve, the workers evolve and the result is a better printing work, with more definition... in the 1st picture 4 stamps are presented with variations both in color and quality of printing.. in the 2nd picture two stamps are presented with an obvious difference in the quality of printing (only SG present the violet 5c stamp because the original is the Purple one..) ; in the 3rd picture there are still missing the 15c and 50c .. 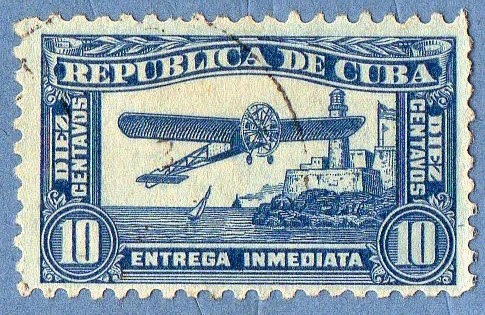 Here We have a Special Delivery stamp .. I couldn't refrain myself from thinking that the design is to simple.. it could be much better with some clouds in the Background.... 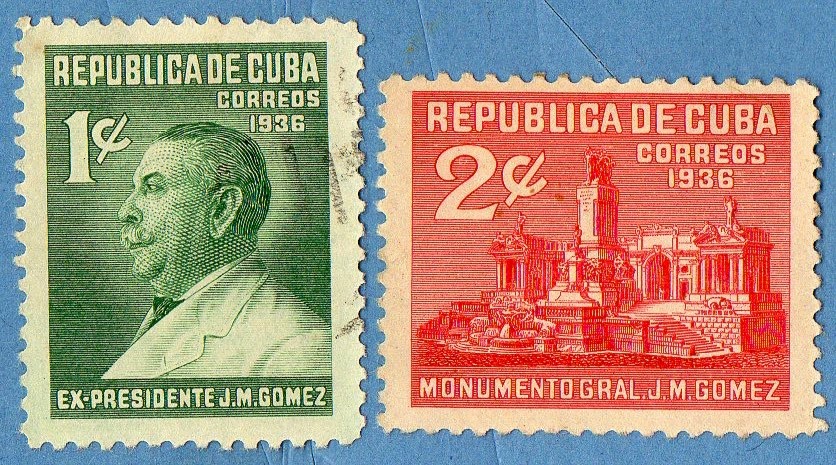 [Right] The influence of the Ideals of Democracy and Freedom from the US is the central point of these stamp and Series.. it is a rich stamp in history and Personalities.. At the Center of the stamp lies the Cuban Coat of Arms... The personalities presented in the stamp are: Lt. General José Antonio De Maceo Y Grajales , Simon Bolivar  , Benito Juarez and Abraham Lincoln

from 1943 until 1952 , at least , there was a series every year with the label "Retiro De Comunicaciones" ... the money collected with these stamps was dedicated to the Postal Workers Retirement Fund.. I have some stamps of these series between those I have to show You today.. 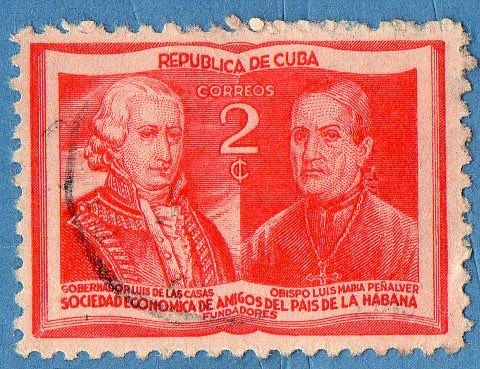 [Left] stamp from one of the main series of the 40's in Cuba..The stamp is about Bartolomé de las Casas, protector of the native's... This Dominican Friar is seen as one of the first 'advocates' of the Human Right's.. 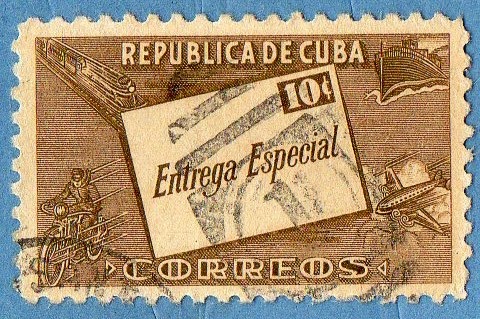 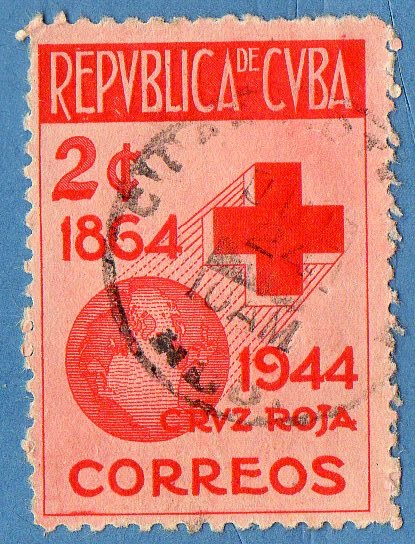 These are once again stamps from the Retirement Fund I was talking about some lines above..The 1st image show us a complete series from 1948 and the 2nd show us two stamps , one from the 1945 series and other from the 1947 series... I have to highlight here that almost every time I say very good things about the Designers and their stamps, but in the particular case of this series from 1945 (1st stamp, 2nd image) I have to ask "How can a stamp like this could be issued???" do You believe in the old Woman's smile ??? It look's like a skeleton smiling..!!.. in this case I prefer not to know the Designer's name.... 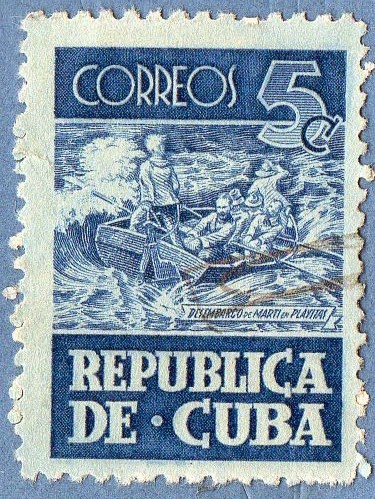 [Left] This series is dedicated to the Philanthropic life of Marta Abreu  ;
1947 "Birth Centenary of Marta  Abreu (philanthropist)" (4) [Recess] Sc(411) 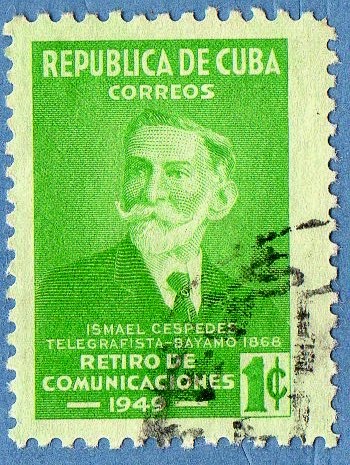 This Dull Yellow Green doesn't help at all to appreciate the quality of the stamps.. even the design details are kept from the viewer by this kind of fog that covers the pictures..
The 1st stamps show us a Spanish Fortress and the two other stamps are from the Retirement Fund series of 1950 and 1949 respectively..I like to say that the 1950 stamp is dedicated to the Employees of the Communications Department and not only to the Postal workers..
1st) 1949 "Bicentenary of Jagua Fortress" (2) [Recess] Sc(433)
2nd) 1950 "Train Wreck" (3) [Recess] Sc(452)
3rd) 1949 "Ismael Cespedes (Telegraph Worker)" (3) [Recess] Sc(438) 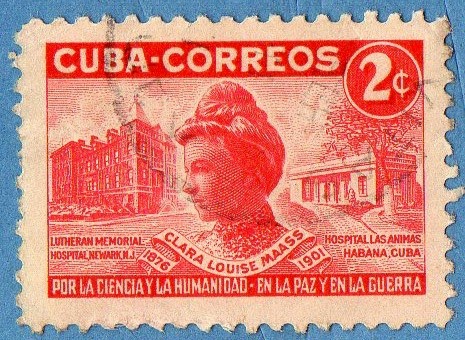 I Left this stamp to the end , not only because of the Chronological display I have assumed in this post, but also because of the it's Actuality .. Clara Louise Maass was an American Nurse that voluntarily accept death in the name of Science ( in this particular case , while experimenting new 'drugs' against the Yellow Fever ).. it is very Actual today , because of all the Physicians and Nurses that are losing their lives fighting the Ebola virus...