A Name and some Stamps..

Among my unclassified stamps there are always some from France.. Old or more recent , French stamps are in the group of my favorites ... not indifferent  to this fact is the absolute abundance of Genius from the stamp Design and Engraving in French Philately...
Today I will show some of the French Definitive stamps I had in the 'waiting for classification' list ... Along this post , i will present some interesting pictures from an old YT Catalog from the 60's... 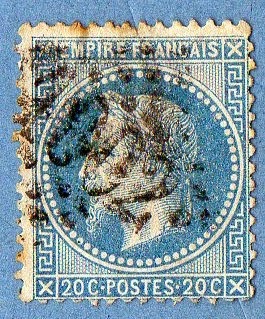 [Left] This is a Napoleon III stamp.. It is presented here not only because it is a new entry but to exemplify one of the several obliteration methods in the earlier stamps from France (large picture below)..
1868 "Napoleon III with Laurel Crown" (Type I)[Right pictures] [Die Engraver (A. Barre)][Typo] Sc(33) 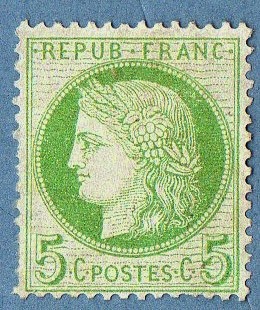 [Right] I have one doubt regarding this particular stamp...it is slightly damaged in the left perforation , but the stamp appears to me as it was never used.. however I will consider it a used stamp...
Yvert Catalog tell's us that if the background is lined (with lines..) there is a different value for the stamp.. My question is What background?? the inner colored Circle background or the external Background.?.. in this case , both are lined.. I really don't understand because i don't have additional stamps from this Ceres issue and i cannot compare different stamps...
the original stamp of 5c from this issue is 'Yellowish Green Over Light Blue' , but Yvert talks of this particular stamp , considering the variety 'Green Over White' (YT 53a)
1872 "III Republic Ceres (Large Numerals)" (4,1) [Des (M. Yon)][Die Engraver (A. Barre)][Typo] Sc(53a)

[Left] These are two stamps of the Sage Type..this series was issued from 1876 to 1900 and during the classification of these stamps we must have in mind the picture below..( the position of the 'n' of 'inv' below the letters 'U' or 'B' of the word 'REPUBLIC').. The name of the series is due , like many others, to the Designer name (Jules August Sage, in this case)..

These are stamps from the Blanc Series , in homage to it's designer Paul-Joseph Blanc.. the series was issued from 1900 to 1929... in 1900 the first 5 stamps were issued (1c to 5c) ,the 7c in 1926 and the 10c in 1929.. After, there was the precanceled issue.; to identify the two types of stamps possible in these series , we must look to the label 'Française' and to the last letter 'E'.. immediately after this letter , there are one small line (type I) or two lines (type II) present... for each value of the series , there are new different types and differences...

These are stamps from the famous series "La Semeuse de Roty" (in homage to the Designer Louis Oscar Roty) ; There are two main varieties of this stamp : with lined Background and with solid Background...I always say that the use of a National Catalog is indispensable in almost every case.. However in this particular series I think that the simplicity of Scott world Catalog allied with the detailed review of the series by Yvert is the best line of work..
The lined Background series has 17 stamps issued from 1903 to 1938 ; the solid Background series has 29 and was issued from 1906 to 1937...
The lined Background stamps have also a beautiful design of the Sun and it's rays..
A complete description of all the existent types of these stamps would be very long and exhausting..we should left it to another time..
[Left stamps] 1903/1938 "La Semeuse de Roty/ Ligned Background and Sun Rays" (17,1) [Des (Louis Oscar Roty)][Die Engraver (Eugene Mouchon)][Typo] Sc(143,144,146,147)
[Right Stamps] 1906/1937 "La Semeuse de Roty / Solid Background" (29,1) [Des (Louis Oscar Roty)][Die engraver (Eugene Mouchon)][Typo] Sc(162,163,168,169,179,180,178)
[I do not present here the types of the stamps (some codes have several sub codes..)..]

[Right] Finally I have finished this famous series... 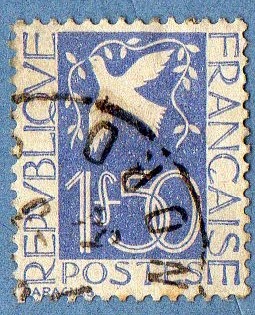 This is a stamp a little bit enigmatic for me, because I don't know the reason of it's actual cv... there were 6 million stamps printed , but this is not a number that justify its value.. perhaps someone can leave a comment to explain me this 'enigma' (it is a stupid enigma , but I leave it here at the same...) .. The stamp is designed by Jean Michel Daragnès and represent the Peace Dove...

A beautiful Coat of Arms Stamp and new Designs of Ceres by Charles Mazelin..I think there is a problem with the first Ceres stamp, perhaps a printing problem , because the design is not clear and beautiful like in the other stamps ...
In a closer look to the coat of Arms stamp, we see that it is surrounded by a chain , that is broken at the middle..The stamp is from 1945 so We can easily reach the conclusion that it represents 'France finally Free' after WWII..
1945 "Coat of Arms and Broken Chain" (4,1) [Des (A. Rivaud)][Typo] Sc(527)
1945 "Mazelin Ceres" (8,1) [Des (Charles Mazelin)][Engr (Charles Mazelin)???][Typo] Sc(532,534,535)

Beautiful stamps from the 'Marianne de Muller' Series... the Marianne series was and continues to be an honor to the designers who are invited to do it...several of the Great Masters of French Stamp Design and Engraving are already in the list of those who have one Marianne stamp with their names.. sometimes this honor is given after the death of the Artist, like the 1967 Marianne de Cheffer.. this time we have a design by Louis Charles Muller..
1955/1959 "Marianne de Muller" (6,1) [Des (Louis Charles Muller)][Engr (Jules Piel)][Typo] Sc(753,754,755,756)

Just to finish this post , here it is a "Just for fun" section...some of the Marianne's from 1944 to the present days...

The talk about the format of the posts in these blog (longer or smaller posts...), that I had in the last post, doesn't make sense anymore.. the truth is that.. sometimes it Happens to be a long post and sometimes a smaller post... Perhaps the easiest way is to 'Go with the flow'...