Last Friday  26/06 I was preparing a new post about the 1922 US series...there are 23 stamps in that series plus some spare , coil stamps and color variations so it was a very troubled weekend classifying the stamps.. then , on Monday when i was actually writing the post, the idea that I was not ready to do the post, with little to say about the series and few of the many possible variations, began to grow...at the end of the afternoon, with the post almost done , I began a last read and a final view , and I didn't liked what I saw... I began to be very worried, stressed and nervous ...time was running and I had no responses to my problem...then suddenly the "Hulk" within me took the controls, for sure to take revenge on Philately that keep's him so far away from me must of the time, and in a Flash the post was deleted!.. well, "what is done , is done" and i took a week off (Yes, the Add in the Blog's Home page..) to prepare another post, this time a more relaxed one.. I continued to think in a post with US stamps , because i have many to present from very different periods of time from 1860 to 1980...I choose stamps from 1901 to 1959..many commemorative's  from the 40's and 50's , a great series from 1901 and other good stamps should be sufficient for a nice post... well let's do it..!

The series is not complete , with the last stamp of 10c missing... the 3 stamps presented separately are spare stamps... All the stamps seem to be in good overall condition, with reasonable centering (except the 4c, that is a badly centered stamp, and the 8c that is a Very good or even excellent stamp in what concerns it's Centering..).. the colors are still good... This series is one more excellent Designing work of Raymond Ostrander Smith...
The Pan American Exposition was idealized to publicize the Region of the Niagara Falls , already a touristic Destination of Excellency...the stamps represent some of the Major developments of the last years in the country.. a few moments ago I was talking of how good or badly the stamps are centered.. this is one very important aspect in US stamps from this period , and their value could be increased , sometimes by 50% or 60% by having  a good Centering.. 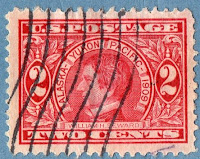 This is an individual series issued to publicity another Exposition , this time with the goal of showing the latest Developments in the Northwest Provinces of the US... the personality represented in the stamp is William H. Seward, responsible for the Purchase of the Alaska Province..
1909 "Alaska-Yukon-Pacific Exposition" (1) [Des (Clair Aubrey Houston)][Engr (M. W. Baldwin, Edward M. Hall and R. Ponickau)][Recess] Sc(370)


I like to have some words about this Wavy Postmark.. In other posts I had the opportunity of say " as loud as I can" that I don't like them... I don't know the history of these cancel's but they really prevent stamps from being re-used... The problem is that they smash, destroy, kill the stamps.. a collector don't have any special joy in having these ..wild things..! I think that it is very strange that collectors from those days didn't had a word about the shape and form , the final result of these cancel's..Collectors were , in majority, important and wealthy people, if they want they should be heard..it is strange that these terrible "Godzila claw marks" have arrived to our days.. they shouldn't have existed in this form.. this was an attack to the present ( of those days..) and future (Now) Collectors...

this is a series issued to celebrate the Olympics of 1932 in Los Angeles.. it is a series of two stamps, but I present also 2 spare stamps and a pre-Canceled..these pre-Canceled
stamps are one more attractive of the US stamps.. they have the names of many different cities and villages in the US, and they could be printed with small lettering, medium lettering or large and bold lettering.. this one is the Medium... there are collectors of these pre-cancels and, if the town is relatively unknown the stamps increase it's value, while if we have a New York pre-cancel, it don't affect the value, because it is very common....
1932 "10th Olympic Games Issue" (2) [Des (V. S. McCloskey, Jr.)][Engr (J. Eissler -vignette- & E. M. Hall -lettering-)] Sc(718,719)

I'm going to start showing now a group of Commemorative stamps from the 30's to the 50's.. some of them are very beautiful.. I will not present the data from the Engravers of these stamps, because it will increase significantly the size of the post,

I guess this is the end of the post, hope you like it,... it is a little different from the others with many videos and Wikipedia pages , but in the end it has many beautiful stamps to see, and that is what really matters..