Last Wednesday I received some stamps from New Zealand.. A new stamp Friend sent them to me in a swap .. the last 3 times I have tried to exchange some stamps I've been robbed ... so my expectations were low, but the final result was much better than I was expecting.. beautiful stamps, and above everything someone I can count on to future exchanges... I felt so happy by having the "Peace" series from New Zealand that I have to show it to you today, so a post with stamps from different origins was in order...

let us start Chronologically as usual, with some stamps from Iraq...

This is a 18 stamps series from Iraq 1934/1938..there are some stamps missing including the 3 higher values, of course... This series present us King Ghazi in 3 different designs , with unknown designer...one more time the Artists lose their identity in these Big Company's , starting to be seen as mere parts of a complex machine... I understand this strange phenomena , but what I really don't understand is why all these hidden data about Engravers and Designers is kept away from the general public, years after the Artists are dead and buried... These company's or those who have all the Archives, should have Digitized all the information... Why can't they do this ???  Why is it so important to hide this information?? Is it a secret? The world is in Danger?? Please, let this info help others to be happy and some of the Artists to have a place of their own in our hobby and in the Art World in general..
Iraq 1934/1938 "King Ghazi" (18) [Recess (Bradbury Wilkinson & Co.,London)] Sc(61,...,69)(71,...,75) 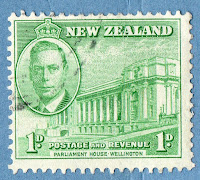 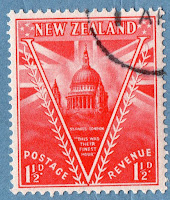 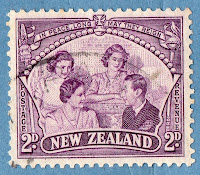 This is a very famous series from New Zealand , designed by James Berry, a Great Stamp Designer.. in my other blog I had the opportunity of making one post about his work for the New Zealand Postal Service , that covers only the years from 1933 to 1951 .. perhaps one or two more posts are necessary to cover all his work...
It is a series where [Recess] and [Photo] stamps coexists, and the engraving work and printing was at charge of 3 of  London Main Printing Company's ...
Well, we were in 1946 and Celebrations were taking place all over the world , because WWII has ended... this series is a commemoration of the end of the War, the survival of the Institutions and the Participation of New Zealand Armed Forces in the War... there are here several great stamps , some of them beautifully designed and engraved...
New Zealand 1946 "Peace" (11) [Des (James Berry)][Recess (Bradbury Wilkinson & Co.Ltd 1d,2d)(Waterlow and Sons Limited, London 0.5d,3d,4d,5d,6d,8d,9d)][Photo (Harrison & Sons 1.5d,1s)] Sc(247,...,257)

One more series from Iraq, now an Air Mail series...the values are divided by 4 different designs and 2 size formats..it is the 1st Air Mail series from Iraq and in the pictures we can see it is commemorating the Air Company Service of the country...the designer and engraver are again unknown...
Iraq 1949 "Air Mail" (8) [Recess (Bradbury Wilkinson & Co. Ltd)] Sc(C1,..,C8)

These are stamps from a group of Series of France , called "Heroes of the Resistance"..I think they are only 4 series in the time frame 1957/1961... I have the 1st and 3rd series completed , but only one stamp from the 2nd and none of the 4th series... This group of series is result of the work of many designers and engravers, some of the stamps are joint efforts of two Artists, and others are designed and engraved by the same Artist... in the 3rd series , all the Design work is at charge of  Raoul Serres and each stamp is engraved by a different artist... again the main focus is the WWII and some of the main Martyrs of the French Resistance to the German Invasion...
France 1957 "Heroes of the Resistance (1st Series)" (5) [Des (Cottet 8F,Albert Decaris 10F,Lemagny 12F,Spitz,18F,Robert Cami 20F)][Engr (Cottet, Albert Decaris, Mounier,Henry Cheffer, Robert Cami)][Recess] Sc(826,...,830)

This is a series from Dubai 1968... it is a beautiful and out of the ordinary butterflies series, with some aspects to highlight.. the designs are very beautiful, the background is original ,  but the printing is poor , with some displacement of the colors and lack of detail in some cases...I should not have scanned these stamps with this resolution ( because they are not engraved...) but I decided to have all the stamps scanned with the same 600ppp...
Dubai 1968 "Butterflies" (8) [Litho (Format International Security Printers, London)] Sc(??) SG(277,...,284) [ Caution, because my SG Middle East is from 1986... the codes could have changed..)