Last Thursday, when I was preparing this post, I remembered some Stamp Annual Books I have from China, Portugal and Germany... none of those stamps are classified yet,so doing posts about them, with an entire year of stamps, is quite normal... not so normal , when I use to talk about the stamps, their difficulties in the classification and the usual abnormalities that sometimes occur, because in today's post everything is more than normal,good printings,no errors of any kind, MNH stamps, etc... Yes,today I have all the stamps from Germany Bundespost 1985.. The Yearbook has also the stamps from Berlin, but I thought that a repetition of the series (with different stamps, although..) could be somehow annoying...From Germany I have 3 more Yearbooks,1987,1988 and 1989... they will be presented when the time comes... let us now start with the stamps from 1985...

I was thinking in a group of nice photos of the Book and some pages, but unfortunately my "Jurassic" Phone wont allowed it... I have photos , but they are low quality pictures... 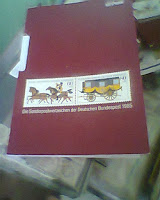 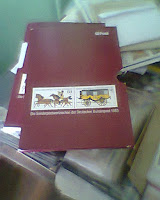 As you can see ,there are also postmarks for each issue, detailed Technical data and a detailed review about the stamp itself... 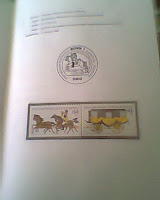 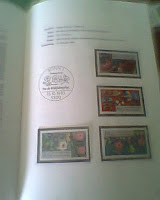 I will follow the catalog order of the stamps, but I will not exceed myself in unnecessary comments ...all the stamps are [Litho] or [Photo] Printed... it was for me something close to a disillusion the fact of none of the stamp are engraved, but this particular year there wasn't  any.. in the other side and to balance the equation, we have very mature stamps in what concerns the Graphic Design.. 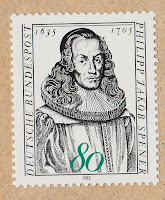 One of the things I noticed with this Yearbook review is that almost all the designers are "Professors"... Yes, they do not only have a degree in Graphic Design but  are also professors of the discipline..this is relatively common with German stamps , and tell us much about the expertise of all those who are connected to the creation of these stamps...
[Left] "2000th Anniv of Augsburg" (1) [Des (H.J. Volbracht)][Litho] Sc(1432)
[Right] "350th Birth Anniv of Philipp Jakob Spener (church reformer)" (1) [Des (Prof. Gunther Jacki)][Litho] Sc(1433) 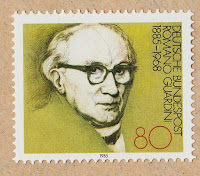 [Left]  "Birth Bicentenaries of Grimm Brothers (folklorists) and 7th International Union for German Linguistics and Literature Congress, Gottingen" (1) [ Des (Elizabeth Von Janota-Bzowski)][Litho] Sc(1434)
[Right] this is a very simple stamp,that in the end surprises all of us with it's beautiful and uncommon color...it is for me one of the best stamps presented today , because it tell us that  the best stamp it isn't  always the most complicated...a simple portrait and a group of well chosen labels could be enough to conquer our attention.. A very good work..!
" BirthCentenary of Romano Guardini (theologian)" (1) [Des (Prof. Gerd Aretz)][Litho] Sc(1435) 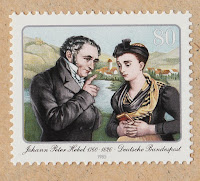 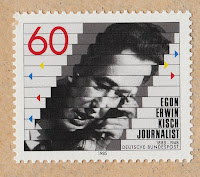 [Left] " 225th Birth Anniv of Johann Peter Hebel (poet)" (1) [Des ( Elizabeth Von Janota-Bzowski)][Litho] Sc(1438)
[Right] we all know that Graphic Design is a tool used also in advertising or whenever we have an idea to "sell" to others...in this case we have a simple photo, a portrait stamp,presented to us in a different way,and we could say that the stamp is very well accomplished -- it is a stamp that is kept in our mind -- it is also a very simple stamp ,just portrait and labels,no frames of any kind,so once again simplicity and Originality (in one of it's many forms..)  were keys to a 'success stamp'...
"Birth Centenary of Egon Erwin Kisch (journalist)."(1) [Des (Prof. Albrecht Ade)][Litho] Sc(1439) 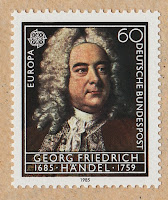 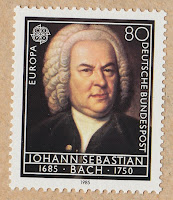 Here we have the Europa Series, one of the most famous topics for Collectors...in this case the subject is music and two of the Greatest German Musicians are represented in stamps with identical general configuration... very beautiful stamps,with an appealing look that gave to this series a prominent place among modern German stamps...
[Left/Right] "Europa" (2) [Des (Prof. Karl Hans Walter][Photo] Sc(1440,1441) 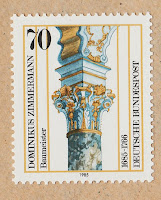 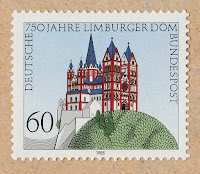 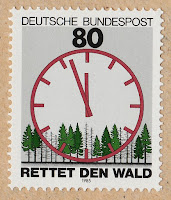 [Left]I like very much this stamp ,because of the final look,but because of all the effort necessary to make it.. We must not forget that we were in 1985 and to make experiments with photo's we needed some hours working in something like a 'Photo studio' , we didn't  had a 'Photoshop' in Our computers to make it..so,to produce this stamp,some time and money was spent .. In those days , German Stamp Designers were investing a lot in innovation....
"Birth Centenary of Father Josef Kentenich (founder of International Schonstatt (Catholic laymen's) Movement)" (1) [Des (Prof. Fritz Ludtke][Litho] Sc(1444) 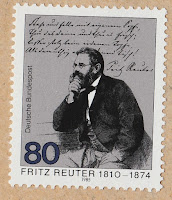 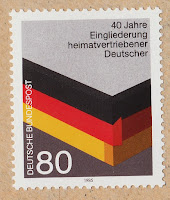 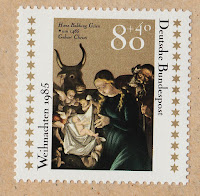 Now I will show the stamps related to Funds or another Humanitarian Efforts....


I would like to end this post with a small "Talk" section about something that is bothering me... some of you could say that  some of the ideas I expressed today are totally against my fierce opposition to the utilization of Photographs in the stamps...well, I'm against  the fact that a stamp could be just a photo,and some labels... A Stamp about a monument cannot be just a photograph of that monument..! some of the stamps I showed above are good examples of what can be done with a photo in order to keep the stamp attractive and appealing to the collector... Yes, the final reason of the existence of stamps, (We can accept it or not...) is the Collector but  what are We collecting??? just photos?? No, it doesn't make sense..! so , what started in the 60's,70's and 80's like valuable Graphic Design experiments , turned into a way of diminishing the Payment Budgets of the Postal Company's, because, without Artists, the stamp is much more cheap... it isn't fare for the collector to continue collecting something that he don't like or appreciate... this is the danger we all are facing NOW...Are we interested in collecting  Photos ?? just photos..!!?

well,this was a different post , where I had to adapt and take a new perspective,just  to have something to say... and I liked it..! this new Graphic approach, without any knowledge or "know how"  (I must say...) is very new(??) .. yes , new to me!