Some weeks ago,I decided to take a look at the Portuguese market , to some small sellers I know for long in the Net...so I bought some stamps, and among them two lots captured my attention... they were from Transkei and Bophuthatswana... I have heard one or two times about Transkei , but the other Country was completely new to me...You can say that's a sign of ignorance, and I accept it , but I really was not aware of the existence of Bophuthatswana... We will talk a little about the background history of Transkey, but for now I need to say that most of these stamps have common subjects and interests to other of some of the Countries of the region,such as Tanzania, South Africa, Gambia, Zimbabwe, etc...

" Transkei was granted internal self government in 1963. According to the Native Land Act of 1913 , property should be reserved entirely for Native Occupation and Ownership.

The Republic of Transkei was established on 26 October 1976 , being the first of the so called 'Homelands' ; internationally , this process was not recognized (..) but the stamps were valid on International Mail... the region was re-incorporated into the Republic of South Africa in 1994. "

This first group of 6 stamps belong to the 1st Definitive series of stamps from the Republic of Transkei.. as you can see , the illustrations show us some of the industrial and/or Cultural activities of the country... the stamps are [Litho] printed, and below the vignette ( we can see easily that there is an absence of frames in the stamp...) there is at the left a label reminding us what is the illustration representing and at the right the name of the Designer, that will turn to be very familiar as We continue our post...the name is A.H. Barret and as we will see , this Artist is almost Omnipresent in Transkei Philately , with a very diversified work....
1976 "1st Definitive Issue" (14) [Des (A.H. Barret)][Litho] Sc(5a,6a,7a,9a,12a,14a) 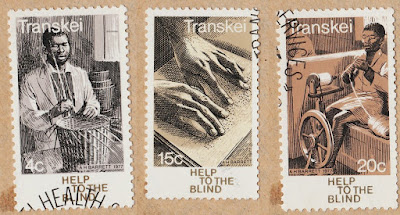 Very nice piece of work..! 3 stamps beautifully engraved by someone , perhaps by our A.H. Barret , that it is the designer himself...as we can see this a much more difficult work than the previous ones , the hands are beautifully designed and it is a difficult topic to design (that is what experts say...) and all the many details are quite good... very nice work.!!!
1977 "Help the blind" (3) [Des (A.H. Barret)][Engr ()][Litho] Sc(38,39,40) 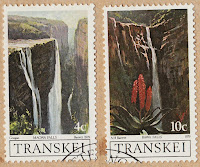 Here is another series designed by A.H. Barret...this time, the stamps are focused on Waterfalls... if You see the stamps carefully ,we will find that 3 of them are based on paintings from another Artists,and just one of them , the 10c stamp, is a genuine painting by A.H. Barret...I want to pick this small detail to talk a little about the theme 'What is a stamp Designer??'... in this case, for example , why is A.H.Barret considered to be the stamp Designer if the paintings are not made by him...?? the answer is that the stamp designer is the man that idealize the stamp,where to put the vignette, is the stamp going to have frames, what will be the color of the labels, where to put them, etc...in the early days of the XX century , the labels were designed, the vignette was made for the stamp itself, illustration, frames and labels were hand designed carefully to build the idea that we wanted to share...now , we have photos and computer generated labels, but we still have to idealize the stamp ,, to know where to put all the items to make it coherent... This is in our days the work of the Stamp Designer (In my opinion...).
1979 "Waterfalls" (4) [Des (A.H. Barrett)(paintings by Boum 20c and Coogan 4c,15c)][Litho] Sc(62,...,65) 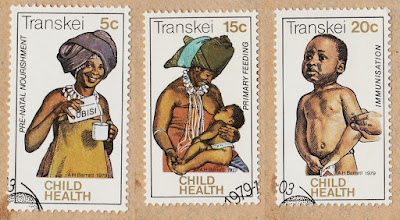 Another point that I want to emphasize is the high quality of these [Litho] printings... this is visible in this series , with very nice designs again of our friend A.H. Barrett.. it is evident that we are facing a very good stamp illustrator with ability to design almost whatever he wants to ....
1979 "Child Health" (3) [Des (A.H. Barrett)][Litho] Sc(66,...,68) 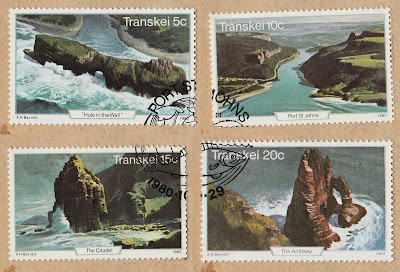 now we have a tourism series that is completely focused on the Oceanic coast of Transkei...it has without doubts, and seeing by these pictures, many places to see and a very nice coastal region to visit... this is again work of Barrett and we can see more of his ability to painting landscapes, already showed in the Waterfall series...very nice..!
1980 "Tourism Series" (4) [Des (A.H. Barrett)][Litho] Sc(83,...,86) 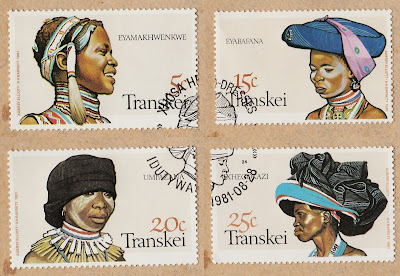 This is a series about the headdresses of the native people of Transkei ,the Xhosa...if you look to the stamps with attention to the detail you will easily find that the printings are, again, very good and You will find a 2nd name after the known A.H. Barrett.. in this case I think that it is the name of the man who took the photos that became models for the illustrations of Barrett...
I didn't find much about Barrett's life in the Internet (and that is the main reason of the nonexistence of a post about him in my Artinstamps blog..) , but many about his work , stamps, paintings and illustrations...however I found a piece of text with some Biographical interest that I leave here for a better comprehension of the man behind the Artist....


«Known in the art world as A H Barrett, Barry was a talented fine artist. Born in England, he immigrated to South Africa as a young man. He earned his living painting portraits, illustrating books, calendars, postage stamps and taking almost any commission that was offered. Birds, ships, fish, snakes, city-scapes, people  whatever he painted, Barry did it to perfection. He used a plethora of reference books, photographs and skins of birds and other creatures borrowed from museums, to ensure his paintings would stand up to scrutiny by pedantic scientists. He spent endless hours ensuring that measurements, colors and minute details were accurate. In three consecutive years, his work won third, second and finally first prize as Best Stamp Design, judged worldwide.»
https://www.openwriting.com/archives/2007/05/the_story_of_ba_1.php
1981 "Headdress of Xhosa Women" (4) [Des (Aubrey Elliott)(A.H. Barret)][Litho] Sc(87,...,90)

this is the only series I have in this group of stamps , that is designed by other Artist, and it is focused on Famous personalities of all times important for the development of Medicine... the series is called Heroes of Medicine and was designed by John Meyer...
I must say that all these stamps from Transkei are in my opinion top quality stamps,with good designs and printings..
1982 "Heroes of Medicine" (4) [Des (John Meyer)][Litho] Sc(97,...,100)

We are just ending the post , but I will not leave without saying that I was very happy to have found these group of stamps from Transkei that introduced me to the work of yet another Great Illustrator , painter and Stamp Designer...I'm just beginning to see some of his work and I am already thinking in the thousands of stamps he must have designed...
Well,  I hope Your time was well spent , seeing these stamps, and travelling with me to another remote part of our Beloved Stamp World.!!..