From time to time , a post appear where there is no need for conversation about technical details, Artists or other catalog pleasantries...today's post is one of those, with small talk and many stamps... 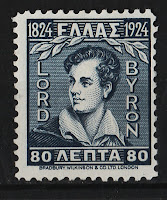 Excellent engraving work of Bradbury Wilkinson & Co. Ltd. The series commemorates the Centenary of Lord Byron's Death...in 1974 there is another series about Byron,and we could ask "why 2 series about an Englishmen in Greece??".. well, he is remembered by the Greeks as a Hero of one of the Wars against the Ottoman Empire...  there is another small detail I want to talk about ,and it is related with the background piece of cardboard that I use in my scans... it is usualy a piece of light kraft brown cardboard, but in this group of Greek stamps, I have made some experiences with one of those black stock cards we sometimes use to store our stamps and keep them away from the excessive moist and sun light..
1924 "Death Centenary of Lord Byron" (2) [Recess (Bradbury Wilkinson & Co.,Ltd,London)] Sc(316,317) 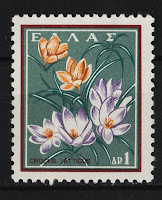 In this second series we have some representations of Greek Mythology «1st) Narcissus 2nd) Apollo and Daphne [Laurel] 3rd) Venus and Adonis [hibiscus] 4th) Pan and Pitys [Pine Tree] 5th) Iris 6th) Tulip 7th) Cyclamen 8th) Crocus» label in my " Hellas 2014" catalog..it seems that the plants shown represent also Mythological entities...
Something I want to tell you is that this series is just one of many others ,work of Anastasios Alevizos , commonly known as Tassos,one of the Greatest Greek Stamp Designers .
1958 "Nature Protection" (8) [Des ( Anastasios Alevizos (Tassos))][Litho] Sc(624,...,631)

now we have a series about a Spanish painter, called "El Greco", due to his Greek ascendance... it is known that I really don't appreciate this kind of series , with paintings of great Artists,because they are not the work of any "Stamp" Artist,there is no real creativity in the stamp unless that of the painting represented...but ,this series is from a period of time that I like and want to have completed in my collection... well , here it is..
1965"El Greco" (5) [Litho] Sc(813,...,817)

it is now time of showing some of the Egyptian new entries to the collection... 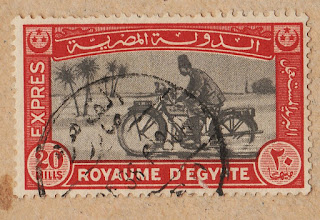 This is a beautiful Express Mail Stamp from 1926/1929.. there are some details to talk about in relation to this stamp...there is a first issue [Photo] printed and then appeared this one in 1929 that it is [Photo (frames)][Litho (Vignette)] ,with some modifications in the Arabic inscriptions...
in 1943/1944 there was another issue with the label "Postes Express" also [Photo][Litho] printed...
1929 "Express Mail" (1) [Photo][Litho] Sc(E2) 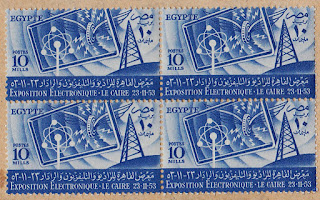 This is a 1963 stamp with a topic very used in that year...it is a commemoration of the UNESCO Campaign to Save Nubian Monuments and they were issued many,many series about this subject by numerous different countries...
Nubia was a region of the Ancient Egypt ,close to the source of the Nile and its fabulous monuments and temples had to be moved away from the expected rising waters of the Nile due to the construction of a well needed dam in the Nile... the monuments would be submerged  for ever , if this kind of procedure was not taken in that precise moment ...it was a huge task , removing stone by stone entire buildings of Pharaonic proportions.., and reconstruct them at another place ,again stone by stone... Fantastic!!! 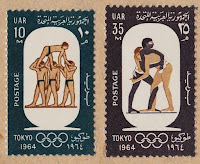 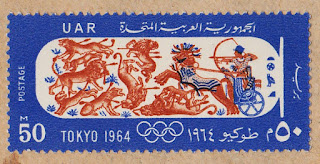 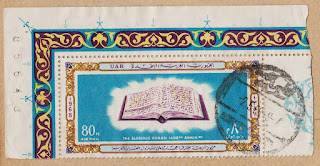 This is a commemoration of the 1400th Anniversary of the Koran... it is a beautiful stamp that it is issued together with another stamp with the same design  but with fv of 30M..."both stamps were issued together se-tenant in sheets of 4 ,separated by a half stamp size label" [transcript from 1986 Stanley Gibbons Middle East]...
1968 "AIR MAIL / 1400th Anniversary of the Holy Koran" (2) [Photo] Sc(C119) 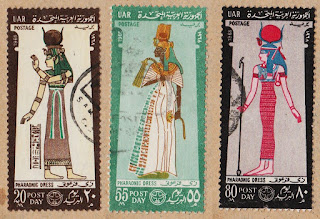 This is the Post Day series of 1968,with 3 beautiful Pharaoh Dresses present in pictures that survived time in temple walls and ceilings of Ancient Egypt Monuments and buildings... of course,it is not necessary to say that a good engraver work would turn these stamps into real Art items...who knows what could have taken form in the skilled hands of Schirnbock, Mouchon, Slania or other Great Engraver..1968 "Post Day : Pharaohs Dresses" (3) [Photo] Sc(728,...,730) 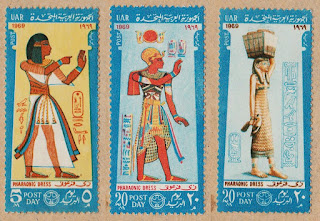 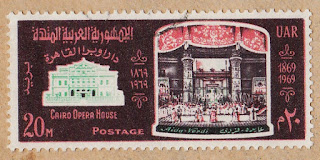 Well , I hope you liked the post... I will make another one , this time with Turkish stamps, briefly..