Today I have some German stamps to present.. stamps from the German Empire and from the states of Wurttenberg and Bavaria..
Let us begin with the oldest stamps.. 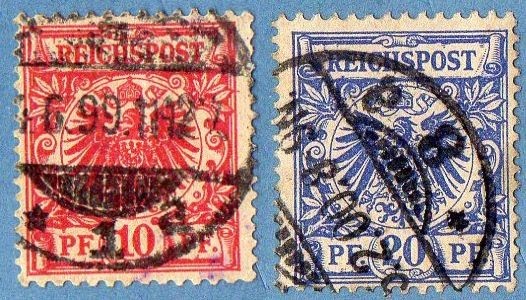 the first group of stamps belong to a series from 1880.from the Imperial Period...another series with these two same designs was issued in 1875/1879.. the main difference between the 1st and 2nd series is that the currency label is "pfennige" in the 1st and "pfennig" in the 2nd.. the Eagle in the center of the vignette is in both cases Embossed..this is a very beautiful series and without doubts another one to add to my "Must Have" list...another important aspect we have to keep in mind is that there are two different types of stamps possible in this series of 1880.. Type A[with dull and faint colors..all of these 3 stamps are definitely of this type..] Type B [ bright and fresh colors, and yellow gum..]..I just want to talk a little about the word "dull" when we are speaking of colors.. A stamp that is classified in the catalogs like a dull color is easily recognized , because it is easy to imagine something like a 'fog' layer that unable us to see the colors in it's full brightness.. it is what happens with these  3 stamps, even with the Ultramarine blue ,that is one of the most faint Ultramarine's I ever seen..
1880 "Numeral and Coat of Arms / Pfennig" (6) [Typo] Sc(38,39,40) [The Scott catalog I use is a world Catalog, so it does not contain any reference to types A and B, and  the code presented for the Ultramarine blue corresponds to "Bright ultramarine" , but we can see that it is not the case...]
The 2nd group of stamps , also very beautiful, was issued in 1889/1900..the series presents us many different color shades with different cv also..I haven't talked yet about watermarks,but i can tell that both series are Un-Watermarked..
1889/1900 "Numerals and Imperial Eagle" (7) [Typo] Sc(48,49)

these are stamps from a  beautiful series designed by Friedrich August von Kaulbach, and issued in 1911.. Now and until the end of this post we are talking about Bavaria stamps.. The personality represented in the design is the Prince Regent Luitpold and this is a commemorative series of the 90th birthday of the Prince.. There are some interesting points to talk in this series:
A) the series has 2 designs and 3 main stamp sizes.. a small size stamp, for values of 3pf to 25pf, a medium size stamp for values of 30pf to 80pf , and a large size stamp with a different design for Mark values..
B)The series is Watermarked ... The watermark is the same for all values ( paralele waves) , but presented Horizontally for 3pf to 25pf and Vertically for 30pf to 20M..
C) the perforation is 14 x 14.5 for the small size stamps, and 11.5 for the medium and large size stamps..
D) Now I will try to explain the differences of the two types of (pf) stamps, with the help of the two 40pf  stamps already presented :

Prince Luitpold's Birthday is printed above the Prince's Head.. 12 March 1911 [this series was issued at 10/03/1911) .. Here lies the big difference between these two stamps.. if We look to the label of the month (MAERZ) , we will see that in the first case the central leg of the E is very short and the Head of the R is small (Type I).. in the 2nd case we see a larger central leg for the E and a Larger Head for the R (Type II) ..this small group of stamps is not representative because it isn't a valid sample of these stamps, but after classifying them I found a larger number of type II then Type I stamps..

there are different values for the two types but I don't have actual values for it, because I used an old SG catalog... [only the 60pf is not covered by this differences] ..There is yet another important and much more valuable difference in the 3pf and 10pf stamps... in these two stamps , the date could be misprinted , and in the end only 911 appears , instead of 1911.. I don't have any stamp with this variety, but I would like to...

The Mark values also have a distinctive variety  in the date .. in the last two digits of the Year (11), The difference is easily seen in the two M stamps above.. in the 1M stamp, we have a type II stamp [ at the bottom of each number one we find

a small horizontal line..] in the 2M stamp we have a type I [at the bottom of the vertical line of each number1 there is no horizontal line..] .. I think that , with the values presented in the catalog , the Type I stamps are scarcer then those of Type II..

I show several stamps of  some pf values , because of these varieties we were talking about and because almost all of them have different shades of the original color..
1911 "90th Birthday of Prince Regent Luitpold" (16) [Des (Friedrich August von Kaulbach)][Photo/Litho (Oskar Conseé, Munich)(Topographical Institute of the Ministry of War)] Sc(77,78,79,80,82,83,84,84A,85,86,87) 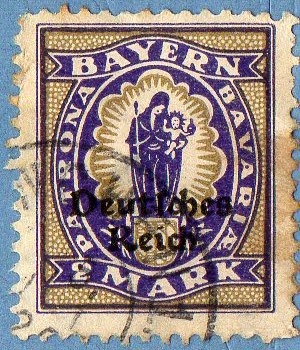 Ok,..we reach the end of this post almost dedicated in it's totality to the 1911 Prince Luitpold..