1897 : Emilio Aguinaldo was elected President of the Philippines Republic...only two series were issued under this free government...the printings are internally made and are of general bad quality...

1899/1935 : in the War US-Spain , the Spanish fleet was destroyed near Manila , and the Paris Treaty was signed between the two countries ; the Philippines were ceded to the US Government for a large quantity of money...( Aguinaldo was first arrested and then he ' allied' himself with the US forces ..).an initial Military government took place and was followed by civil Administration in 1901.. this is the period I choose to call " US BEP"(Bureau of Engraving and Printing).. if you don't know this particular period of Philippines Philately,You have here plenty of Excellent stamps and Printings...from 1926 to 1935 , two great series were issued with several beautiful different designs, always with the Very good [Recess] printings available in those days in the US...so, this a very interesting period and for a US collector it sure is appealing..

1935/1942 : BEP, PBP )Philippines Bureau of Printing)
1942/1944 : The Japanese invasion took place in 1942 and in 1943 the Japanese declared the Philippines as a Republic under the sphere of Influence of Japan...some overprinted stamps and some other original series printed in Tokyo were the most significant that happened before the Republic declaration .. some PBP were the main 'dish' until 1944..

1946/1958 : Independent Republic...this is a period where other great Printing companies choose to work also in Philippines.. so we have stamps from BEP, PBP, ABNC, Waterlow, GPW Tokyo, De La Rue, Courvoisier (in the beginning of the [Photo] period), Bradbury Wilkinson and Enschedé...of course, this is a period where we had the usual one or two color printings.. 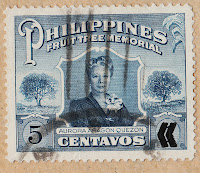 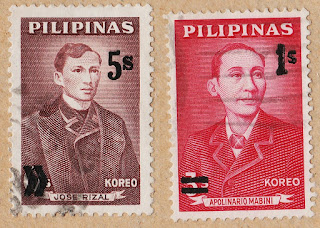 The originals of these surcharged stamps are from 1962 , from a series with 12 portraits.. this series has the particularity of presenting several different perforations and being printed by 4 different companies...the chocolate brown stamp is printed by another Japanese company called Toppan of Tokyo..the other stamp is a Bradbury and Wilkinson work...
1963 "Surcharge on 'Portraits (1962/1969)" (12) [Recess (Toppan Printing Company,Tokyo)(Bradbury and Wilkinson)] Sc(874,873) 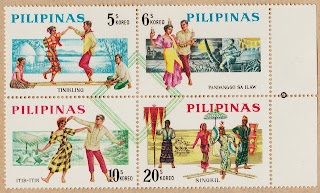 This is the first Colorful series I have to present , but it is not one of the best printed... if You notice carefully we will find some problems in the foot of the figures in the bottom right stamp..these are usual problems in [Photo] printed stamps , with some colors out of their place...but even these stamps present a level above medium , with well printed backgrounds and well defined figures...
1963 "Folk Dances" (4) [Photo (De La Rue)] Sc(889,...,892)

A nice design representing the visit of the President of Mexico...many and bright colors are definitely the Central point of attraction of these stamps...
1963 "Vist of President Mateos from Mexico" (2) [Photo (GPW,Tokyo)] Sc(896,897) 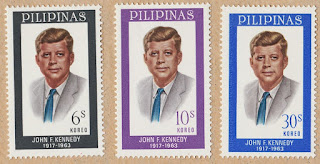 These Kennedy Commemoration series are very common in many of the Countries in the world...after President Kennedy's Assassination , a global wide consternation has hovered over the planet and soon these stamps became even one of the main topics of collection...this is Philippines tribute...
1965 "President Kennedy Commemoration" (3) [Photo (Harrison)] Sc(925,...,927) 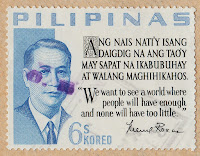 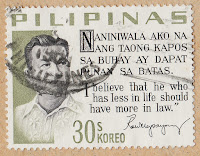 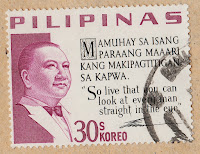 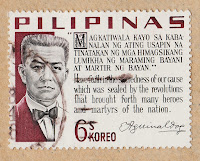 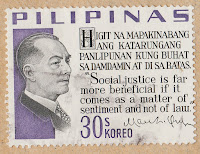 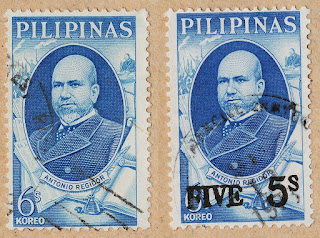 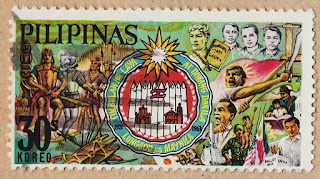 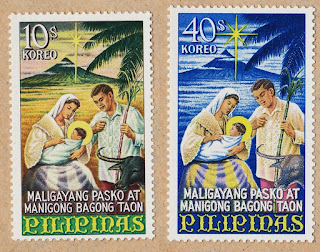 Two beautiful Christmas stamps ... [ I think that the proliferation of so many powerful Companies in this period, was very helpful to the general high quality of the [Photo] Printings , because in the end, "nobody wants to be bad in the picture..!" ]
1967 "Christmas" (2) [Photo (GPW,Tokyo)] Sc(976,977) 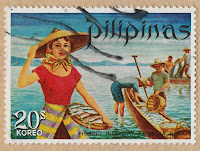 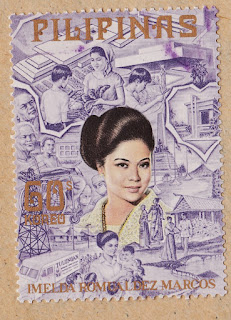 well, it was a brief look to the Philippine stamps , and next time I'll have Classic stamps from Luxembourg .. and I have also a lot of work to do...