I like to start this post by saying that I am a little sad about my priorities... despite my miserable financial condition , I couldn't resist to buy some stamps last week ... very good prices and above everything the opportunity..!
Tomorrow I will show what I have received Yesterday morning... it is just a set , but an important one.. Beautiful stamps..!

Today I have some stamps from Colombia and I will need some more posts to end their classification , because the waiting list is long..

When I was choosing which stamps to classify and after a superficial view , I saw that from the classic Years until almost the 60's , Colombia's Philately was a "battle field" of Giant Engraver Company's.. We find Waterlow & Sons, American Bank Note Co, Thomas De La Rue, etc..
this particular series is worked by Perkins, Bacon Co, Ltd .. This is not a negative comment.. The quality and beauty of the stamps is almost guaranteed.!.
The series is a mix of important personalities, coat of arms, Monuments, and views from Colombia...[ The Independence from Spanish Empire is the main subject of the Series..)
The personalities represented are : 1)Francisco José De Caldas (Founder of the city of Caldas and the Colombian  Department of Caldas )
2) Camilo Torres, Politician and Advocate.
3) Antonio Nariño, Political and Military leader of the Independence Movement.
4) Simon Bolivar, a Political and Military Leader..Led Venezuela, Colombia, Equador, Peru and Bolivia to the Independence from the Spanish Empire.
5) José Maria Córdova , General from the Colombian Army in the Latin America War against Spain...
The Perforation is 14 for all the 12 stamps of the series..
It was issued during 1917...
Sc(339,340,341,343,344) 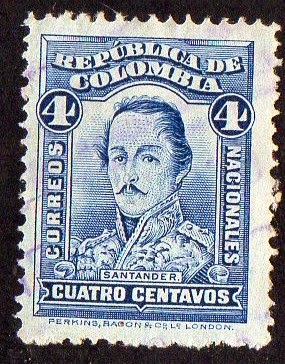 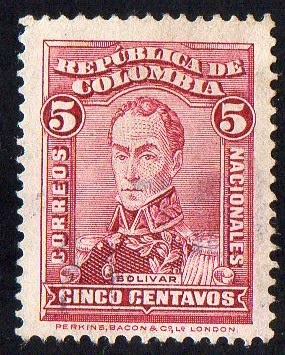 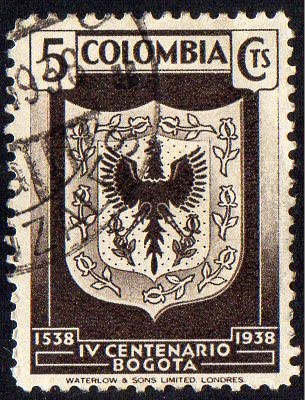 two stamps are presented, with the same subject ("picking cofee")..Both are printed and engraved by The American Bank Note Co.; the 1st is from 1934 and the 2nd from 1939 .. The 1st was issued alone and the 2nd in a set 8( with various motifs..)
As You can see the 2nd stamp has an curious overprint .. it is a "Victory" Overprint from 1945 with the portraits of Roosevelt, Stalin and Churchill, representing themselves the major winning parts (if there is a winner in a War....) .. it is also necessary to say that there are 3 possible overprints (in Black, Red or Green..)
Perf: 12
Sc(420,521) 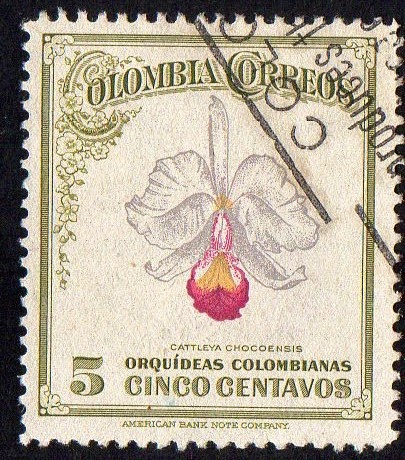 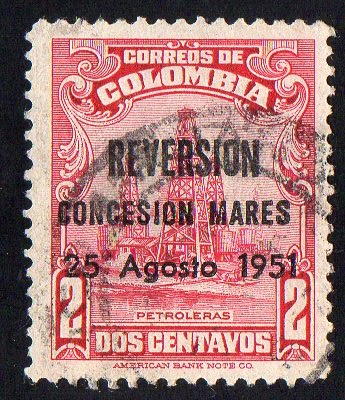 stamp from 1939 overprinted with "Reversion Consesion Mares 25 Agosto 1951"; the stamp represents an oil well and the main subject is the reversion of the Mares Oil concession to Colombia.
Perf: 12
Sc(596) Complete set 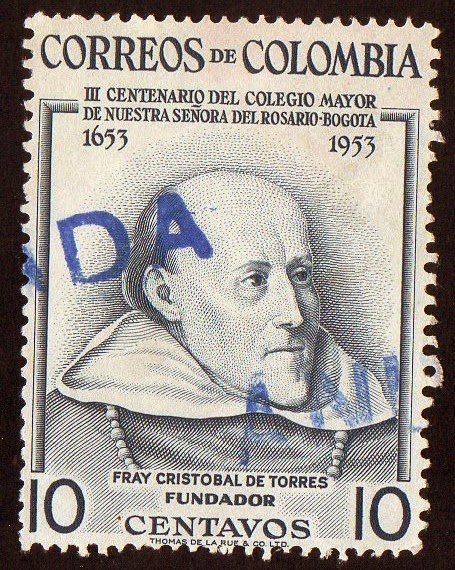