Today, I think the post will be a little bit shorter than the last.. I have stamps from Turkey, the Ottoman period and some President Ataturk stamps...

I already talked , and I will talk again about Tughra's... but what is a Tughra?? 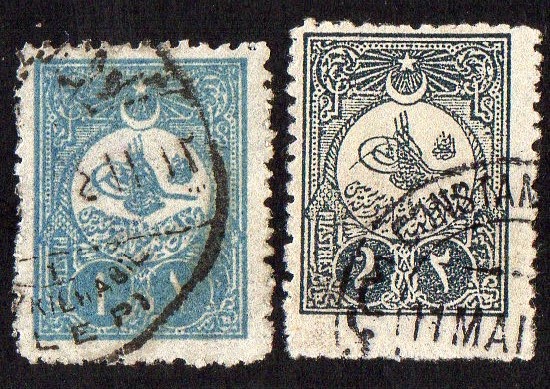 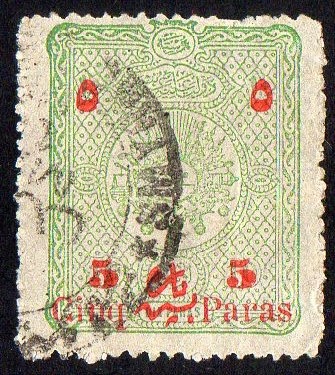 [Right] I did not detected the blue overprint in a first look to this stamp..
this is a stamp from a series (5) 1909.. it is a stamp projected to external mail... in a time when Turkey Post Office had a ferocious competition from foreign Office's in Turkey (British, French, German,etc) , this Overprint offer's the merchants and Exporter company's a special discount , to improve the use of National stamps.
This Overprint was made on stamps also from 1909 .. so we have : "Overprint on 'Crescent Moon & Star over Sultan's Tughra' 1909" ; the difference between the 1908 and the 1909 series is due to the position of the Arabic characters below the Sultan's Tughra... in the 1908 series , they touch the center circular frame and in the 1909 series , there is a space between the center frame and the characters (of course, if you know Arabic writing , perhaps the message is different....)
Perf: 12
SG(290c) Sc(162) [Typo] 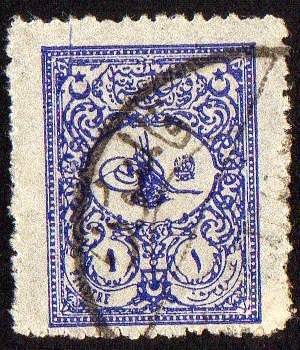 This next group of President Ataturk stamps was in a little glassine bag, since the beginning of 2013 (someone brought them from Turkey..)

there is nothing more to say about President Ataturk, that already has not been said before  in other posts..so, I will just write the stamps data and nothing more....

in this post there was no information about stamp designers... it was not possible to gather it..it is dificult ( and  I have a National stamp catalog.!!.)